Most of the developed countries in the world are facing a major health problem of lower back pain (LBP). According to a survey conducted by NHIS in the year 2002 on the British general population, 38% adults reported low back pain in one year. Hence the present study aims to identify which type of physical therapy intervention is effective in relieving back pain.

Study revealed that the pain of the patient was not significantly reduced in both the group with P<0.21 for Group A and P<0.399 for Group B. However, on Ostwestry disability Index, Group A shows significant improvement with P<0.21 whereas Group B with P<0.399 has no significance.

The study concluded that both treatment strategies were turned out to be equally effective in improving the pain and disability of the patient with back pain and no statistical and clinical significance has been reported to conclude that which one is more effective than the other.

Most of the developed countries in the world are facing a major health problem of lower back pain. The term lower back pain is very wide and a large group of heterogeneous disorders of back are covered into this domain1. The pathology is found mainly in the discs and the vertebral joints of lumbar spine which are the main source of lower back pain in degenerative diseases of the vertebral region and sciatica which may cause due to ruptures in the posterior part of the annulus2. The occurrence of back pain rises from third decade of life till sixty years of age where women are more prone to develop this condition. A systemic review was conducted which includes 28 studies, provided evidences that the occurrence is 4.2% in individuals between 24 and 39 year old and 19.6% in between 20 and 59 aged total prevalence in Brazilian older population was observed 25.4%3.

Western world is also suffering from major back pain problems estimated that 60% to 90% is the life time prevalence whereas 15% to 42% is the point prevalence; approximately 5% is the annual incidence of back pain reported in 2002. According to NHIS out of a general population of 31,044 adult respondents, 26.4% of respondents had at least low back pain lasting for a whole day in the past 3 months, 13.8% neck pain was reported. Asian Americans had the lowest prevalence of low back pain as compare to American Indians and Alaska Natives. According to another survey conducted by NHIS in the year 2002 on the British general population, 38% adults reported low back pain in one year and one third of them suffered from the back pain for more than four week during the periods of two decades thus soaring the prevalence disability due to low back pain exponentially among the Britain population.

By stretching the tensor fascia latae muscle expansions of the capillaries which increase the blood supply thus reducing the metabolites and providing sufficient oxygen to the muscle cell reduced pain and improve range of motion9. There is need to explore the effectiveness of tensor fascia latae release in low back pain because there is no study done in Pakistan.This study was conducted in Physiotherapy Department of Inje University, Korea in 2017 about Tensor fascia latae (TFL) muscle increases the pelvis and hip range of motion and it reported to decrease the back pain. Thus the reason of this research was to investigate the effects of static stretching using a load on TFL muscle in patients with back pain10.

A study conducted in Rehabilitation Support Research Institute in Japan. They studied that the chronic lower back pain patients who have no neurological sign and symptoms in the lower extremity, performing DS of the TFLM and hamstrings can result in an instant good development of posture and gait. This study assumes that the degree of tension on the TFLM may indirectly effect the muscle tension of the muscle groups that surround the thigh. TFLM had an instant result on acute back pain. DS of the TFLM not only has an instant result on acute, non-specific back pain, but also has durable long lasting results11.

Gottschalk FR studied different patient with lower back pain, whereas, an experimental group and control group was measured through VAS and he concluded that the trial group showed major change in VAS. Hence static stretching using a load can be actively utilized for back pain patients with shortened Tensor fascia latae muscle12.

A study was conducted in Department of Physical Therapy, Yonsei University, Wonju, South Korea. A previous study demonstrated that use of a pressure biofeedback unit (Chattanooga Group, Inc, Hixson, TN) during SHA could decrease quadratus lumborum activity and increase Gluteus medius activity. However, there is no reported method to avoid excessive TFL muscle activity. When the TFL is activated to compensate for a weak Gluteus medius, the TFL may become dominant, compared with the Gluteus medius, from repeated use. A dominant TFL can contribute to pain in the hips, in the lower back13.

In the existing clinical practices to select the best favorable intervention for low back pain, there are no clear evidence-based guidelines suggested for the health practitioners as what intervention is more beneficial for the management of low back pain. Only on a weak base tensor fascia muscle release in lower back pain is preferred. A randomized controlled trial was conducted to evaluate the effectiveness of hip abductors including tensor fascia latae muscle release on back pain and improve evidence of physical therapy practice in Pakistan.

All subjects was assessed by the senior physical therapist and trigger point was released by giving ischemic compression for 90 seconds, after ischemic compression stretch was applied to the muscle for 2 minutes and 5 minutes cryotherapy was given at the end. Back pain was assessed by using VAS scale before and after treatment. Each patient received three treatment sessions per week.

A sample size of 80 was calculated using a prevalence of back pain from study conducted at Lahore Pakistan Titled as “Prevalence and Risk Factors of Low Back Pain Among the Office Workers of King Edward Medical University Lahore, Pakistan”

The procedure of lower back pain was briefly described to the concerned patients and a written consent was taken from them for research purpose. All subjects were assessed using assessment Performa. Pain intensity was assessed using (VAS 0-10). VAS is reliable and valid model for measurement of pain.

To analyze the qualitative data SPSS 21 version was used to calculate the variables. Moreover, Non-parametric tests were used to find out the differences between control group and case study group.

The data was collected through sampling technique which divided the sample size into two groups randomly by software and that was marked by “0” as a control group and “1” as a case group. Furthermore, the control group received tensor fascia exercise. Whereas, the case group didn’t receive tensor fascia exercises but was given other back exercises for collecting the data.

Data kept secret and was secured.

Total 80 patients were evaluated to determine the pre-and post-treatment on Visual Analog Scale and ODI score for related symptoms in tertiary care hospital. They all are randomized enrolled and divided into two groups. Total 38 patients were male and 42 female patients with the mean age of 32.08 ± SD 8.22 (range 21-60 years) were enrolled. Gender distribution of the patient is shown in figure 1 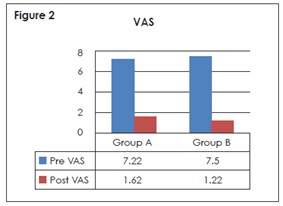 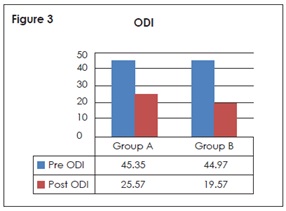 The result obtained from the study revealed that the pain of the patient was not significantly reduced in both the group with P<0.205 for group A and P<0.399 for group B. However on Ostwestry disability Index, group A shows a significant improvement P<0.205 whereas for group B no such significant result has been obtained P<0.399. It was however also noted while comparing both the group the post treatment mean value for pain on Visual Analog Sale and disability index value on Ostwestry disability index is improved in Group B patient. The improvement noticed in group B patient can be called a statistical improvement on the mean values obtained after the treatment as shown in figure 2 and 3 however the clinical outcome of both the treatment strategies was more or less equal.

Low back pain is seriously frequent health problem and a main cause of disability that affects work performances and well-being15. A randomized controlled trail was conducted to evaluate the effect of tensor fascia latae muscle release and muscle exercises along with electrophysical agents in the treatment of low back pain. The study includes 80 patients who were diagnosed with low back pain including males and females without any serious pathology and contraindication.

In this study participant from both genders were selected. It was found to have higher ratio of male participants than female. Similarly in a systemic review, Buchbinder and colleagues confirmed that females suffered more than male16. However, in the other study hoy d et al in 2014, the lower back pain is more common in males than females17. The age group from 21 to 60 years was included in this study keeping in view some recent studies such Bulletin August 2016 states that as people aged 65–74 are more prone to develop back pain18.

The study concluded that the both treatment strategies were turned out to be equally effective in improving the pain and disability of the patient with back pain and no statistical and clinical significance has been reported to conclude that which one is more effective of the other. However, it was noted from the study that the technique of release of the tensor fascia latae muscle is found to slightly more effective in reliving back pain in compare to the general physical therapy approach.