Ascertain the effects of visceral mobilization in low back pain management.

A 33 years old female with complaint of acute low back pain referred for physiotherapy treatment, during her physical examination, we failed to correlate her pain with any neuro-musculoskeletal reference. So, we extended our palpation on abdominal region and found tender points on bilateral iliac regions. Her pain was recorded on VAS pain scale that was 8-9/10. So, we decided to proceed through visceral mobilization on her reproductive system and at the end of the session she had no pain or discomfort.

There is a remarkable recovery in low back and leg pain by using VM only twice. It’s not only resolved completely but the effects sustained for more than a month. According to her, she observed great improvement in her walking. She regained the ability to sit on and get up from floor. She felt these differences right after the first session of treatment.

Visceral mobilization is found to have short term as well as long term effects in treating individuals with back pain history. More studies are required to determine the efficacy of VM therapy, as it is found to be a very low-cost alternative choice to the expensive invasive treatments.

A house wife of 33 years old with acute and recurrent back pain and leg pain, also having an onset of the low abdominal discomfort with history of vaginal discharge, initially visited the neurologist and after physical examination she was found neurologically sound and was advised to visit gynecologist. After visiting gynecologist, she was referred to physical therapy. During her physical examination in physical therapy department, we found that there was no tenderness on her back nor any movement of back or legs was affecting her pain.

Normal medical treatment protocols for back pain include pain killers, muscle relaxants, anti-inflammatory drugs and physical therapy. It is estimated that 80% of adult population experiences back pain during their lifespan which is the most common cause of work-related disability1. Back and spine disorders are the second most common cause of disability among adults in U.S2. Furthermore, old age and poor people more commonly experience back pain in U.S3. Back pain is the condition that causes limitation of activities in an individual and inability of recruiting certain tasks4.

Although, a number of Randomized controlled trials have investigated different interventions for low back pain (LPB), several interventions which are used by the practitioners and clinicians are still untested for their efficacy. Visceral manipulation (VM) is one of those untested interventions. VM is a soft and gentle manual therapy technique aims to asses, manage and treat disorders that are related to physiological movements of internal organs5.

The altered movement relationship between organs and connective tissue, supporting them could be manifested as low back pain by three mechanisms; visceral referred pain, central sensitization and local fascia changes. Currently, there is no data available which indicates the prevalence of the patients with LBP presenting to their treating physician or physiotherapist with visceral referred pain. These types of patients do not have a clear presentation of mechanical Low Back pain rather they present the symptoms of gastrointestinal, urinary or gynecological disorders. Often, visceral pain refers to the distant and superficial areas6-,8. Visceral pain presentation is diffused which makes it more difficult to be diagnosed by the clinician.

It is the neural convergence due to which the visceral pain is referred to the somatic structures. Sympathetic nerves with signals from viscera and somatic nerves converge mutually in the dorsal horn of the spinal cord. As the proportion of the visceral afferents is low, the sensation of pain is often misdiagnosed to be of somatic origin. Thus, neural convergence is the most obvious phenomenon due to which altered movement relationship presents to the conditions like LBP9. Central sensitization is also a well-known mechanism through which visceral disorders cause pain in somatic regions.

Central sensitization is a condition of the nervous system that is associated with the development and maintenance of pain. Excessive firing of visceral nociceptors can also result in central changes. In such stimulation, normal sensory stimuli such as mechanical touch may also be experienced as pain. Disruption in fascia may interrupt biomechanics around spine which may lead to myofascial pain, decrease in blood supply and lymphatic flow10, 11, 12. The research question for this case study was whether VM therapy could help to treat the subject with acute back pain and diagnosed with a number of different disorders.

The referring physician had systematically assessed the patient’s physical condition and MRI. Usual tools for assessing patients presenting with low-back pain include physical examination, palpation, observation of gait and posture, the use of neuro-musculoskeletal tests, and radiography. The patient stated that when she was 26 years old, she had a C-section surgical procedure to deliver her child. After that she experienced a low back pain but she ignored that for many years and kept on working. By age 33, she was unable to work more than 2-3 hours. Last year before going on severity, the physician prescribed her physical therapy. The patient stated that the physical therapy primarily consisted of lying flat on a table and raising her legs one by one, which she felt caused her further pain. She estimated that she attended less than a dozen sessions over a period of a two months but her condition didn’t improve. Then, her gynecologist referred her to our physical therapy department. At the initial visceral mobilization therapy session, the patient indicated that her pain level on visual analogue scale (VAS) was 8. Her pain intensity also varied depending upon her activities. She stated that her pain and stiffness used to be worse during cold weather, menstruation and leucorrhea. And if she skips her morning medication, by noon her pain level becomes 9 on VAS. She could only sleep comfortably on her left side. She could not sit for more than a half hour and could not stand without support or longer than 30 minutes. She could not frequently get up and down without support. She had to sit down to put her pants on and was unable to lift over 20 lbs. The patient wants to turn out to be more pain-free and less reliant on pain medication. She would like to have more strength, flexibility and improved physical status.

There has been no randomized controlled trial conducted to investigate the effectiveness of visceral mobilization (VM) for the treatment of low back pain (LBP). There are many existing theories regarding VM, which claim to have an effect on pain but like many other manual therapies this also has not come up with a specific mechanism.VM technique claims to have reduced pain by regulating the normal rhythm of fascia underlying the cavities of thorax, abdomen and pelvis5. According to one of the theories VM reduces fascial load on spinal structures by enhancing the normal fascial sliding mechanism of one organ on another 13-15. It further leads to normal blood flow, lymphatic flow and carries sufficient amount of oxygen to the tissues. When this nociceptor activity is reduced, the referred pain is less likely to occur. Central sensitization changes may also start to revert to more normal state11.

The patient was assessed for pain on VAS, prior to the first session, and following the 2nd session. The subject additionally reported decrease in pain levels, less need for medication and positive effects on activities of daily living after each session. The patient consented to an anonymous reporting of this case.

Effects required a treatment plan that the patient could bear: 15 minutes of treatment of two days with a follow-up after 15 days and reexamination afterward.

The Treatment was as Follows

Female reproductive system was treated for only two days with VM. Participant received the same standardized physical examination and standard care. In both sessions, lack of organ motility and fascial restriction was treated using specific VM techniques showed in figure 113. This takes approximately 10 to 15 minutes and may involve light or deep manual fascial release and specific organ mobilizations in the abdominal and pelvic areas13. The minimum/maximum number of treatment sessions was decided based on participants’ symptom progression. 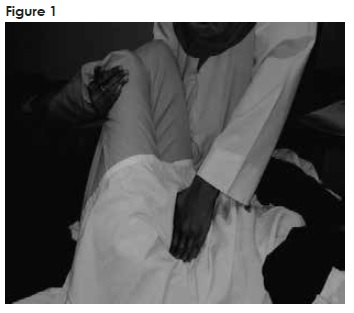 The patient showed optimistic feeling after the first VM therapy, although she felt sore for a couple of days, she stated that the feeling was less stiff in the mornings. By her 2nd appointment, she was thrilled at the improvement in her back pain, and stated that her painful knee also felt more flexible and less painful when she moves her leg. She reported that she has become able to stretch out her medication doses over longer periods, cutting out at least one of the doses daily.

She stated that she felt so much better a couple of days after the 2nd session, her knee had continued to feel better and she is able to move without feeling any pain, which she had not been able to do since last year. She related that the pain had bothered her most at the beginning which was gone altogether in her lower back, at the sacral area and right gluteus.

At the first maintenance visit, the patient reported that she was having a good day with minimal discomfort. she continued alternating a lot between sitting and standing, but stated that it is a habit she had for so many years, that she may be doing it almost automatically instead being in pain. She seemed to be reclaiming her life and enjoying the increased activity. (The patient was followed up after 15 days.)

The patient reported better vitality in general since her pain was reduced. Her posture and gait showed noticeable changes and she also reported that she feels more ease in performing activities of daily living after years of pain and limited abilities. Her ability to sit and stand more comfortably for longer periods of time increased, whereas she formerly was restless and used to get up and down frequently. No specific measures of strength were done during the study, and she still does not try to do any lifting of heavy objects. Although she is 100% pain free, feeling better and the need of medication decreased.

It is unusual to get good results from just two sessions; there are no studies demonstrating that only visceral mobilization produces positive results on back pain. Different clients experience different results because many factors affect every individual are: cause of dysfunction, duration, degree of pain and disability, psychological effects, and even how the condition has affected relationships with friends and family members. As with all studies based on self-reporting instead of controlled scientific observation, it is impossible to definitely attribute improvement to true effect, placebo effect, or both.