To determine the effects of exercises by using treadmill leading to cardiac diseases due to HTN response of exercise among ectomorph male and female.

An experimental study design was used.

30 students that were studying in a reputed institution with BMI of 18.5 (both male and female) were the part of this study.

B.P and H.R are two significant indicators in our body that give signal about many cardiac diseases silently existing in our body. Our study concluded that the body responses to exercise are similar in both ectomorphs male and female; therefore ectomorphs have equal risk factor for cardiac diseases.

Today we are living in a modern era, in which world has become more developed in terms of science and technology, unfortunately this advancement in science and technology decreases outdoor activity, that leads to many fatal non communicable diseases like hypertension, diabetes and cancer, so exercises have a beneficial effect on our body, for this purpose we want to find the responses occur in our body due to exercise, for e.g. blood pressure and heart rate.

There are three basic human body types i.e. Ectomorph, Endomorph and Mesomorph. The ectomorphs are recognized by typical lean, lack of much fat or muscle tissue1 because of fast metabolism hence the risk of getting low body fat2.Their muscle growth takes too much time to become hypertrophied. Similarly, people who are ectomorph put extra efforts for obtaining muscular body weight. On the other side the endomorphs have capability to grow muscle mass more efficiently than ectomorphs, whereas losing body weight is too much complicated for endomorphs as compare to ectomorphs. At last the mesomorphs contain predominance of muscles, connective tissues and bones. They have an equal capability to lose or gain weight without any complications. These types of people have also decreased chances of non-communicable diseases occurrence.

Majority of coronary artery diseases are results of high blood pressure, rate of hospitalization and death is highly common in the adults 2-4. It has been ruled out that the role of blood pressure (BP) response to exercise is one of the risk factor for causing hypertension2-8. The systolic blood pressure (SBP) response to elevate heart rate (HR) and VO2 in treadmill and cyclic ergo meter has not been obviously described up till now9-13. Likewise, these conclusions point out that the quantity of elevation in systolic blood pressure on the cyclic ergo meter is probable to be greater than the quantity of raise in systolic blood pressure on the treadmill9. Furthermore, it was documented that VO2 max gained during treadmill was 6% to 25% which is greater than VO2max obtained during cyclic ergo meter 14-20. The difficulty with utilizing Systolic blood pressure at a steady workload to calculate the blood pressure reaction is that persons will carry out at different percentages of their greatest capacity. Whereas it has been suggested that the progress of hypertension is predictable by a pre hypertensive condition that can be established by unusual cardiovascular activity to behavioral challenges and environment21, such as cold water absorption, mental arithmetic tasks, isometric and dynamic bodily stress tests. One of the most beneficial affect may be exercise stress test 22,23 which is now broadly used in hospitals to diagnose coronary heart disease and in sports and occupational medicine to assess cardio respiratory fitness. However, its accuracy for identifying persons on risk factor is more prone to develop hypertension and as a test for the indicator of hypertension onset is quietly being discussed. Earlier studies indicating that this issue has used unlikely definitions for an exaggerated Blood Pressure response to exercise, some are based completely on Systolic Blood Pressure whereas others are based on both Systolic and Diastolic Blood Pressure24. Likewise, it was mentioned that there is no significant difference in mean arterial pressure between the male and female populations, which indicated that both genders have equal risk factor for occurring cardiovascular diseases.

Middle aged males and females have a more dominant parasympathetic and sympathetic regulation of heart rate but this gender-related difference does not appear in the older population25. The fat tissue description between both genders are necessary here because the division of adipose tissue thickness, fat mass and quantity were studied in four regions in randomly selected middle aged men and women in which the sample size was 930 obese persons. The randomly selected males were found to have highest adipose tissue thickness in the abdominal region comparative to females. Female participants found to have fat deposition on gluteal and femoral regions. Likewise, fat mass increases with increasing body fat up to a maximal size of approximately 0.7 – 0.8 micro grams/cell in each area26. It has been stated that there are some anatomical and physiological differences between males and females. Females have smaller, shallower, wider and more circular pelvic cavity as well as smaller bones and lower bone density than males.

A treadmill is a machine which broadly used for walking or running purpose. In addition, it is used by the people who are physically fit or want to be physically fit and it offers the highest potential load on cardio pulmonary system28. The treadmill test can influence the magnitude to measure Vo2max, with the graded running test giving the maximum value28. Subject of the study were selected according to their body types which divided into ectomorph, mesomorph and endomorph. In a study, researcher arranged a noninvasive treadmill protocol for determining Vo2max in 1963 in patients with heart disease, pulmonary disease, athletes and young active individuals28.

Maximum heart rate can be evaluated by using Bruce protocol or exercise treadmill stress test, but it required much time for testing. Similarly, we can also use treadmill to detect the elevated response of blood pressure during exercise29. If there is any rise in cardiac output or total vascular confrontation, the systolic BP will be raised. This rise in blood pressure helps to indicate the elevated vascular blood flow and this will reduce the blood circulation to muscles. During the starting stages of exercise, cardiac output is increased due to rise in stroke volume and heart rate.

During the exercise the quantity of blood pumped by heart is increased because oxygen demand to muscles increase whereas in heart rate it is an involving factor that influence the Sino-Atrial node which controls heart rate throughout the signals coming from sympathetic and Para sympathetic nervous systems.

Studies have shown that the general raise in heart rate through the exercise is due to decreased Para sympathetic tone. Furthermore, rise in heart rate due to increased work rates by the stimulation of Sino-Atrial and Atrio-Ventricular nodes by sympathetic nervous system.

Maximal oxygen utilization (VO2max) is the principal amount of oxygen a person can get from inhaled air while doing dynamic exercise; it includes a larger part of muscle mass. It is also admitted that the best calculation of cardiovascular fitness and exercise ability. VO2max represents the quantity of oxygen transported and used in cellular metabolism30. Likewise, when dynamic exercise is in progress Oxygen requirement rapidly increases, similarly VO2max alters by sex, age, exercise habits, heredity, and cardiovascular status. Maximum values of VO2max take place among the ages of 15-30 years and turn down gradually with increase in age30. In addition to this the VO2max is poor in females comparative to males because they have low hemoglobin, less blood volume and decreased muscle mass.

On treadmill training the body has different exaggerated responses. The body’s reaction that exaggerates during any activity or exercise may be circulatory strain, heart rate, respiratory rate, metabolic rate, and so forth. Motivation behind the study is to focus the diverse overstated reactions of systolic circulatory strain on ectomorphs in distinctive sexual orientation.

This study was an experimental study.

30 students studying in the DPT program of reputed institution with BMI below18.5 of both genders were included in this study

The Research is approved by the ethical review committee of the university. Participant’s demographic information was kept confidential and was only accessed by the authorized personal.

The data was analyzed through SPSS 16, through paired sample T test.

30 active and healthy individuals without the diagnosis of having any disease were selected. They are well informed for conduction of comprehensive test on Tread mill. They all were educated about the Bruce protocol or Graded Exercise Test. The criteria for participation are nonsmoking, age (>19 and <30), non-medication users; and without orthopedic condition which can be increased by exercise. These additional bases are collected for documented constant Cardio-Vascular response to Bruce protocol exercise test9. Subject of the study is selected according to their body type which divided into ectomorph, mesomorph and endomorph. Individual record, known consent as the experiment conducted. The correlated hazards and the advantages are totally explained for participation9.

Study was conducted in a fitness gym located I the university and instructions were given to participants to avoid smoking and strenuous exercise at least forty-eight hours before the test conducted. They were weighted in (kg) and their height was measured in (cm), and participants then completed a medical history and physical activity questionnaire.

Subjects exercised on the Treadmill were asked to follow the Bruce protocol28. Treadmill started from 2.74km/hr and inclination of 10% in every 3 minutes was increased in inclination by 2% side by side addition of speed9.Room temperature was maintained between (200C-24oC) after ten-minute seated resting position. The Heart rate and Blood pressure were documented at steady state with a Heart Rate Monitor and Mercury Sphygmomanometer9. Normal BP is defined as baseline blood pressure < 140/90 mm Hg and Uncontrolled BP as baseline BP >140/90 mm Hg followed by the guidelines of the eight results of the Joint National Committee (JNC 8) on recognition, assessment, and management for exaggerated BP28. They exercised until exercise was completed and required criteria were made. BP and HR was monitored again and documented. Measurements were taken by the same individuals for all subjects using the same calibrated mercury sphygmomanometer and digital heart rate monitor.

Difference in heart rate response to exercise in ectomorph males and females The value of p is 0.000 by paired samples test which shows that there is a significant difference between heart rate before and after exercise. (Table 1)

The value of p is 0.055 by independent sample test which shows that there is no significant difference in heart rate after exercise among males and females (Table 2) 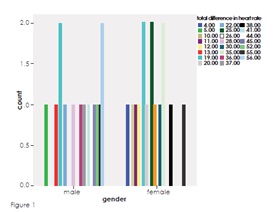 The value of p is 0.503 by independent sample test which shows that there is no significant difference in blood pressure after exercise among males and females (Table 3). 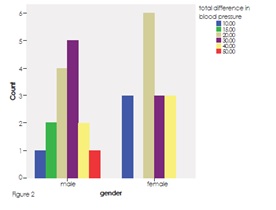 Total no. of sample is 30, it included both male and female, 15 participants were male and 15 were females.

It was clearly seen that there was no significant difference between male and female heart rate after exercise as compare to resting heart rate, likely the statistical analysis also shows that there is no significant difference in exaggerated responses after exercise between male and female. Because of small number of sample size this result could not be generalized on a large population, therefore similar studies need to be conducted on larger population.

Previously there were no studies done on exactly similar topic, precisely this new topic was choosen to find out the blood pressure response to exercise in both genders.

Blood pressure and heart rate are the two very important indicators in human body that give signal about many heart diseases which may or may not silently exist in one’s body, but from this study we concluded that the body responses to exercise are similar in both male and female respectively, therefore both male and female have equal risk factors for heart diseases.

[1] Hayward L. What is your body type: endomorph,mesomorph or ectomorph? [internet].[cited 2015]. Available from: http://www.leehayward.com/body_types.htm