The purpose of the study was to investigate effects of Ectodermal Dysplasia (ED) on an individual’s listening and communication skills; and suggest a suitable habilitation regimen. A case study was conducted to determine the impact of the genetic condition and management approach required for it, at the clinical setting of College of Speech, Language and Hearing Sciences (CSLHS), Ziauddin University, in 2013 over a year. The subject, a 5-year-old girl, diagnosed with Hypohydriotic Ectodermal Dysplasia and congenital, Profound Sensorineural Hearing loss, received the Aural-Oral approach for management of listening and communication skills, based on principles of utilizing residual hearing for understanding spoken language, and developing verbal communication skills. The child was evaluated in January 2013 through informal parent-child, clinician-child interactions, and parents were interviewed for the case-history. Communication skills were screened via checklists, observation scales, whilst a norm-referenced measure of receptive-expressive language skills (Pre-school language scale), was administered on completion of a year’s speech therapy. The child showed remarkable improvement in communications skills within a year, progressing from language age of 12 months to 2;6 years. The Aural-Oral Approach proved to be an effective management option in Hypohydriotic Ectodermal Dysplasia; however, it would vary depending upon severity and type of the condition.

Ectodermal Dysplasia (ED) is a group of conditions resulting from abnormal development of the ectoderm which impacts normal development of skin, hair, teeth, nails and sweat glands. The ectoderm is one of three tissue layers found in very early stage of embryonic development. Dysplasia is a term referring to an organ which did not develop the way it should have. Thus, the term ectodermal dysplasia implies that one or more of the parts derived from the ectoderm have not developed normally1. The symptoms and characteristics are spread over a wide spectrum, and chiefly include decreased sweating, poor temperature regulation, frequent high fevers, intolerance towards heat, abnormal nails, missing and malformed teeth, diminished hearing, lower nasal bridge, thin and sensitive skin and hair and poor vision2. The disorder’s classification is based upon its varied features. There are about 150-types of Ectodermal Dysplasias3 each of which includes poor temperature regulation as the major symptom.

Hearing impairment is one of the features of Ectodermal Dysplasia resulting from abnormal development of outer (pinna and/or tympanic membrane), middle (bones of the middle ear) or inner year (cochlea). A number of studies have shown the co-occurrence of hearing loss with ED. A study conducted by Shin JJ, Hartnick CJ on 69 patients revealed 22% of hearing loss history and 26% of pinna abnormalities in individuals presenting with ED4. Since the ectodermal layer gives rise to the sensory epithelium of the ear, nose and eyes and it contributes to formation and functions of pinna or external ear canal, the nervous tissue of the inner ear, it can cause varying degrees and types of hearing loss. The degree of hearing loss varies with the type of ED. The loss can be conductive or sensorineural ranging from the severity of mild to profound. Children with ED and hearing impairment require support in their speech-language development, and learning.

The objective of this study was to evaluate the impact of Hypohydriotic Ectodermal Dysplasia on hearing, speech and language skills and to look into outcomes of Aural-Oral communication approach in the case of a child with ED. The case of a 5-year-old girl-child, referred to CSLHS for speech-language therapy services, was taken into consideration for this purpose. The child was seen for speech-language evaluation at the clinic on 1st September 2012. She presented with Congenital Ectodermal Dysplasia and Bilateral-Profound-Sensorineural-hearing- loss. She received a cochlear implant in June 2012, which was switched-on in July 2012. Prior to this she used hearing aids for two years (since1 year of age), and received speech-language therapy for 18 months. However, her receptive-expressive language remained poor despite continuous efforts by the therapist and family.

The parents were interviewed and child’s communication skills assessed informally, through parent-child and clinician-child interactions in September 2012, through play settings in which the child was given toys of interest; and clinician initially observed from the one-way-mirror, later participating in the interaction. Data was collected through speech-language screening tests, objective audiological tests, and information provided by parents5. The results of child’s initial assessment revealed a speech-language delay due to hearing impairment characterized by limited receptive-expressive repertoire (child expressed herself through 1-word approximations and gestures), limited attention span due to impaired auditory perception; and poor speech skills also due to absence of teeth (child had only two upper incisors)6,7.

The child attended bi-weekly speech-language therapy sessions post assessment for a duration of 30-45 minutes/- session. The process of intervention involved direct therapy at CSLHS and indirect therapy at home. Indirect therapy was provided by the mother who was trained to reinforce therapy objectives in natural settings. Aural-Oral communication approach was implemented, which emphasizes on naturalistic conversation to help child process and understand verbal language, and speak. It focuses on interaction between child, parents and clinicians, teaching the child to use amplified residual hearing.

Auditory management and training require management of amplification device, and auditory stimulation, by parents and clinician. Parents were instructed to maximize verbal interactions at home and other settings. Auditory training comprised of the following levels with speech stimuli:

The child was only trained to auditorily discriminate all speech sounds and produce bilabial stops/b/&/p/, bilabial nasal/m/, and short vowels, in the first year. Speech correction was initiated after she got her dentures in February 2013.

The child was provided with extensive language therapy, with following goals of language stimulation: • Supporting Functional Communication through Concept-Formation.

Child’s progress was monitored over a period of 12-months (including 30-day vacation), at the end of which, a standardized language assessment, Pre-School language scale (PLS) was administered, however, standardized scores couldn’t be obtained due to modified administration methods (re-phrasing & repetition of instructions). Informal assessment through parent-child and clinician-child interaction, revealed significant increase in functional communication skills, within a year. 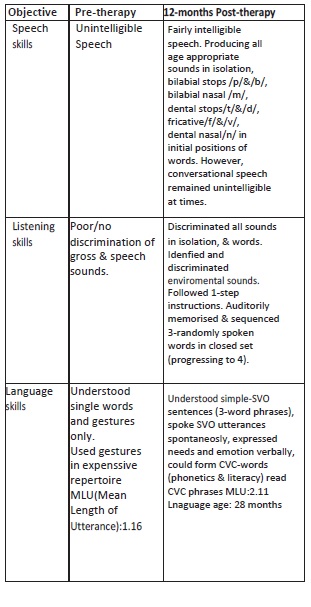 ED causes multiple impairments and detrimentally affects functional communication. Moreover, it leads to deterioration of structures, which can worsen the impairments or defects, challenging the intervention regimen. However, timely, appropriate and extensive management through amplification devices and speech-language therapy can alleviate the effects of hearing impairment considerably. The Aural-Oral methodology was successful with this child, however, severity and type of ED, would determine management options, on a generalized basis.