Aim: The aim of the study was to determine the frequency of Erb’s palsy, its associated risk factors and health-related quality of life of these patients in Islamabad and different cities of Punjab.

Methodology: A cross-sectional study whereby 242 patients with erb’s palsy were analyzed. Data was collected from different government and private sector hospitals of Islamabad, Rawalpindi, and Lahore, Gujranwala, Okara and D.G khan (Jampur) through direct patient contact and postal and electronic mail during a period of 6 months. Two questionnaires used to assess factors and quality of life, were Questionnaire of Erb’s palsy and WHO Quality of life BREF questionnaire. All patients of erb’s palsy aged below 12 years were included.

Results: The frequency of Erb’s palsy recorded in Islamabad and different cities of Punjab is about 1.67% with Okara having the highest frequency rate of 3.13%. Among the Fetal-associated factors; Macrosomia 107(44.2%), among Maternal-associated factors; Multiparity 150(62.0%) and among Obstetric-associated factors; assisted vaginal delivery 134(55.4%) had the highest frequency. Quality of life in patients was found to be moderately affected with mean 3.18±0.47 SD. All the physical, psychological and environmental domains were equally affected with mean 3.19±0.39 SD, mean 3.14±0.56 SD and mean 3.22±0.65 SD respectively.

Conclusion: The frequency of Erb’s palsy is highest in Okara among different cities of Punjab and Islamabad, Pakistan. Macrosomia, multiparity and assisted vaginal delivery was the highest associated factors with erb’s palsy. Quality of life was moderately affected in patients with erb’s palsy.

Erb’s palsy mostly occurs due to excessive downward traction on brachial plexus at anterior shoulder during problematic deliveries. It can also be due to hyperextension of arms during breech vaginal delivery. Other causes can be due to failure of normal rotation of shoulders in oblique position or due to continuous force of posterior shoulder against sacral prominence before delivery6. There are certain risk factors which can lead to Erb’s palsy such as shoulder dystocia, macrosomia, gestational diabetes, persistent fetal head malposition, maternal age and prolonged stage 2 labor7.Other risk factors include breech presentation, multiparity, induction of labor and assisted vaginal delivery8.

Patients with erb’s palsy have a poor quality of life and low self-esteem due to loss of function of upper limbs, which may lead to ultimate disabilities. This highly affects their physical, psychological, emotional, behavioral and socio-economic state of life9. Persistent erb’s palsy can decrease the child’s strength and stamina; impair bone growth, cause muscle atrophy, poor balance and coordination along with abnormal movement and function of joints10.

Several epidemiological studies have been conducted worldwide to find the prevalence, risk factors, and quality of life of patients with Erb’s palsy4, 5,7,8,9 but limited data is available about erb’s palsy prevalence in Pakistan. The rationale of this study is to find the prevalence and associated risk factors of erb’s palsy in Islamabad and Punjab so that these can be taken into account to reduce the occurrence of disease. This study will also highlight the effects on health-related quality of life of Erb’s Palsy children so that these can be worked upon for improvement.

The sample size was calculated using the Rao soft calculator with a 5% margin of error, 95% confidence interval (CI), and 50% response rate. As the population size was unknown, it was assumed as 20,000. Total 14,491 patients were approached using purposive non-probability sampling technique, out of which 242 patients who fulfilled the selection criteria i.e. all children aged less than 6 months visiting selected hospitals of Punjab/ Islamabad having Erb’s palsy, were included whereas those who had any associated musculoskeletal and neurological problem other than Erb’s palsy were excluded. Questionnaires of Erb’s palsy and WHO Quality of life were used to assess risk factors and quality of life. Official permission was taken from the WHO to use the questionnaire in the study. After explaining the purpose of the study to the parents of the selected population, questionnaires in English were handed over to them. All subjects and their parents read and signed an institutionally approved informed consent form before the evaluation.  Data was analyzed by SPSS version 21. (Statistical Procedure of Social Sciences). Descriptive analysis in terms of percentage and frequency was analyzed. Chi-square association was used to find out the association of the risk factors with the quality of life. Results were described in the form of tables and graphs. 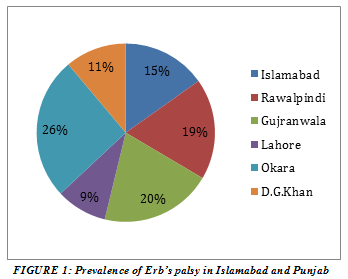 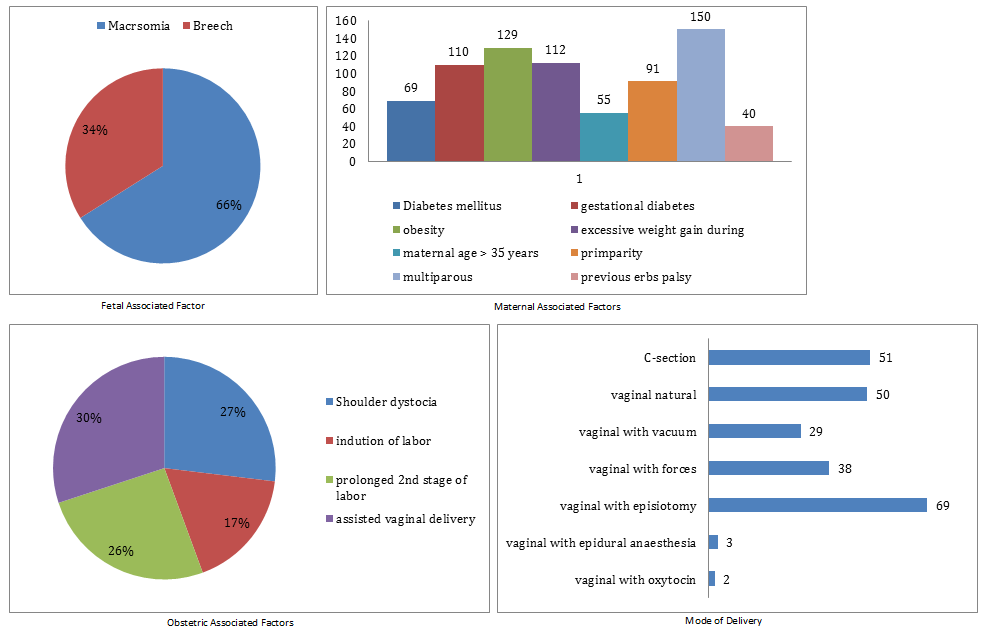 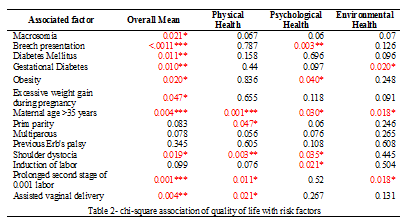 Erb’s palsy consists of the spectrum of symptoms involving the upper limb mainly. It can be congenital or acquired. This study found the higher Prevalence in Okara is probably because it is an under-developed city with fewer medical facilities and trained staff. Also, because we targeted the major hospital i.e. District Headquarter hospital (DHQ), most of the people from outskirt areas also bring their children here for treatment, hence the increase in reported cases.

The rate of children affected by Erb’s palsy in Karachi, Pakistan was 3.62/1000 live births4. However, the Prevalence of Erb’s palsy in Islamabad and Punjab was 1.67%. When compared to neighboring country India, frequency in Pakistan (1.67%) seems to be higher than the reported rate of India i.e. 0.5-4.4/1000 live births5. One reason for this increase is due to the larger study area targeted in Pakistan compared to India which only included one tertiary care Hospital in their study.

Macrosomia and breech presentation were reported as major associated fetal factors with Erb’s palsy. This is supported by previous studies that show macrosomia, breech presentation is the highest associated risk factor associated with Erb’s palsy14, 15, and 16. Main reason for this is the fact that babies having higher birth weight undergoes difficult deliveries, mostly with the assistance that damages the brachial plexus if not done properly. This is also supported by a retrospective study done in 2020 stating that higher birth weight increases the chance of developing Erb’s palsy17. These risk factors may predispose Erb’s palsy in different ways18.

Out of all maternal factors, the highest association of Erb’s palsy is with multiparous and obese mothers. Both these factors contribute to gestational diabetes that is also associated with the presence of Erb’s palsy. Rodney et al state that Erb’s palsy is associated with multiparous women having more than 1 baby; a reason for this is that these women experience pregnancy even in their late thirties which further complicates their pregnancy putting the baby at risk for Erb’s palsy17. Maternal obesity and gestational diabetes are the most significant factors that affect the growth of the fetus15, 16. Birth injuries were common in infants of mothers that were obese or multiparous. Studies also showed that an increase in maternal pre-delivery BMI increased the risk of birth injuries19, 20.

Out of four obstetric factors, the study showed that most cases of Erb’s palsy had undergone assisted vaginal delivery with or without shoulder dystocia. However, maximum cases did have shoulder dystocia at the time of delivery for which multiple procedures are used either by midwives or doctors. This study showed that a common procedure used by both doctors and midwives was episiotomy. It was also seen that cesarean delivery did not seem to prevent Erb’s palsy, which is likely due to other maternal or fetal factors that contribute to the development of Erb’s palsy. A retrospective cohort by Kate et al identified no significant difference in the number of Erb’s palsy patients that underwent cesarean or vaginal delivery21.

According to the current survey, statistical analysis of the quality of life of patients indicated that Erb’s palsy had a moderate effect on their lives irrespective of the physical, psychological, and environmental health domains. Deficits in abilities to physically function in daily life were noticed but were compensated with secondary strategies including surgical operations to minimize complications. Elassal suggests early surgical intervention should be used to achieve the most benefit24. Psychological health was made better by support from friends and family whereas environmental health issues were sorted by access to healthcare facilities in or near the area of residence. A severe difficulty in movement pattern and function of the upper limb is observed in infants with Erb’s palsy25. The overall quality of health is severely disturbed in infants with Erb’s palsy.

The frequency of Erb’s palsy patients is highest in Okara among major cities of Punjab and Islamabad, Pakistan. Macrosomia, multiparity, and assisted vaginal delivery were the highest associated factors with Erb’s palsy. Quality of life was moderately affected in patients with Erb’s palsy. 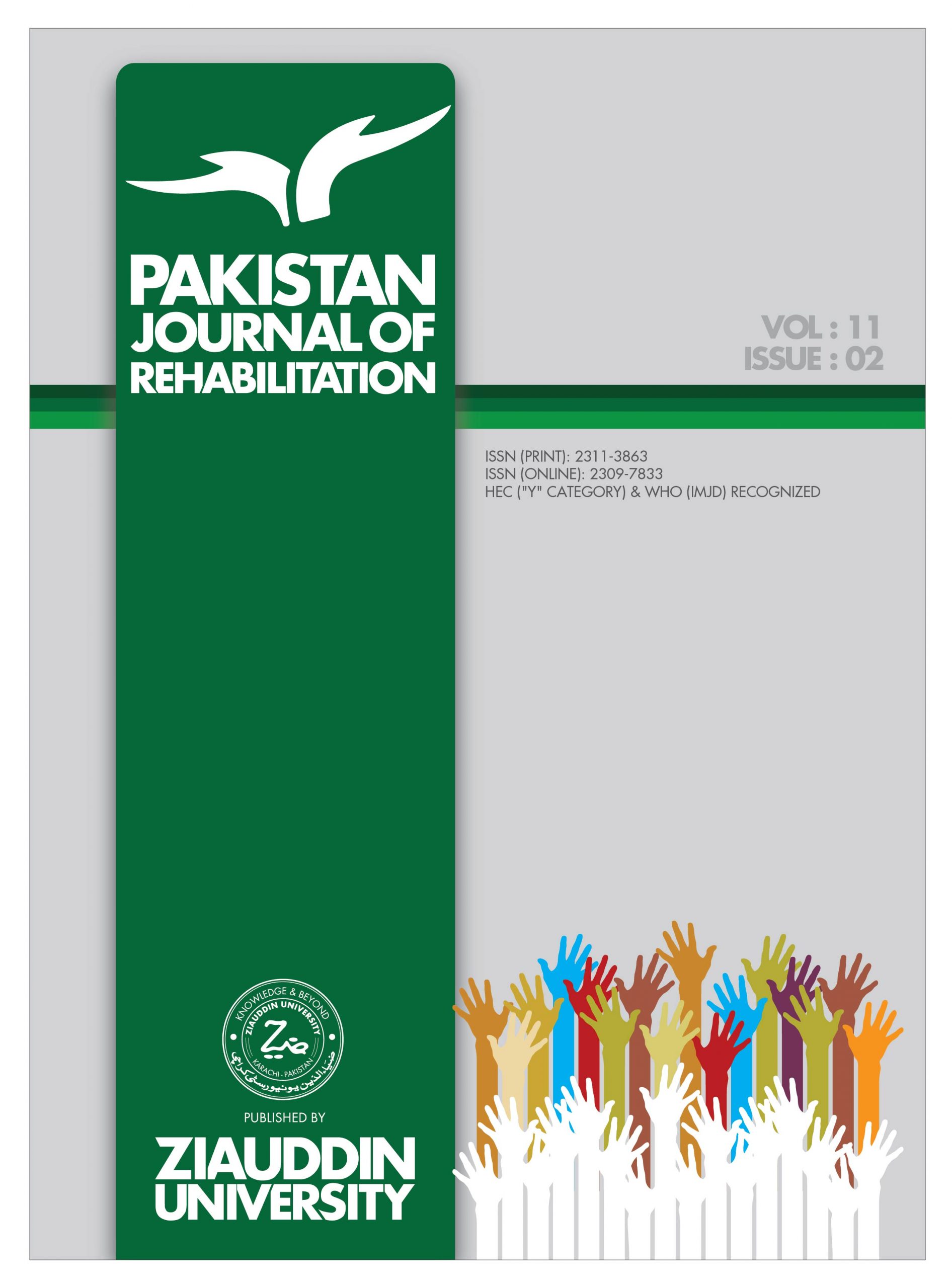