Background: Low back pain in athletes is common. Core muscles action and function can be understood by the coordination of upper and lower limbs during sports and other dynamic activities. Plyometric exercises are a mainstream type of activity, most generally used to improve athletic performance.

Objective: The objective of this study was to compare the effects of core stability and plyometric exercises in athletes to improve pain and disability in non-specific low back pain

Study design and sampling technique: Current study was the randomized controlled trial.  Simple random sampling technique was used in this study. The participants were divided into Group A and B according to Lottery method.

Setting and participants: 38 subjects were considered for the study and divided into two equal groups of 19 each, randomly. Age of selected subjects ranges from 20-40 years. Data were collected from PSB.

Interventions & data collection tools: Participants of groups A performed core stability exercises and group B did plyometric exercises. Pre-Treatment values of VAS and MODI were calculated.

Conclusion: Core stability exercises are more effective than plyometric exercises in athletes to improve pain and disability in non-specific low back pain.

Nonspecific low back pain can be defined as pain in the lower back area, which is not associated with any common pathology like infection, tumor, osteoporosis, fracture, structural deformity, inﬂammatory diseases, radicular conditions, or cauda equine syndrome1, 3. It is termed as mechanical pain in the lower back4.

The Core muscles are of the utmost importance in sports medicine5, 6. Core stability exercises help to improve athletic performance and in the generation of power, while the complex athletic activities7. It is a further development of the force, and motion, starting from the nearest to the next segment, in accordance with the “summation of force” principle7, 8. In the competitive exercises and sports, force from the earth is transferred through the muscle of core to the distal segments9.

The most important issue for the athletes after low back pain is to go back to the game and back to their previous level of activity after pain management. However, there is not enough information in the literature on this topic, in order to determine the optimum period of time in order to get back to the game after the treatment10. Adequate core strength helps to maintain sufficient core stabilization11. Athletes, during dynamic and highly loaded movement require maintaining stability12.

Plyometric exercises are a mainstream type of activity, most generally used to upgrade athletic execution13. The Stretch-contraction cycle, which includes the extending of muscles and ligaments of the square following the constriction, is a vital piece of plyometric works out14.

A lot of plyometric exercises, even at low intensity, and a lot of stress on the joints, and the speed of the movement and are not eligible for early rehabilitation. Plyometric exercises are one of the most frequently in the lower limb strength training programs can be defined as a fast, powerful movements, which are related to the pre-stretching of the muscle, and just before he falls15.

Effective core stability program is needed to prevent low back pain and to enhance performance. There is lack of literature support among athletes to compare the effects of core stability and plyometric exercises to improve pain and disability in non-specific low back pain. Furthermore, findings from this study definitely help future sports physiotherapists in prescribing specific and effective exercise plan and it will save energy and time of both therapist and athlete.

Qaseem, Amir, et al. did the study “Noninvasive treatments for acute, sub-acute, and chronic low back pain. The LBP and related disability seems to be getting worse with so much progress in the field of treatment and rehabilitation16.

Neff, Shawn carries out research aimed at the prevention of pain in the lower back. Its results showed that some of the exercises are the best to strengthen the muscles and assist in the prevention of the recurrence of pain in low back. The exercises have been selected on the basis of the specific muscle or muscle group, they were designed to do17.

Szafraniec, Rafał, Janusz Bartkowski, and Adam Kawczyński founded that there is an exercise, and it can be incorporated in the training of novice athletes to prepare for the technically challenging task of the Olympics, the scam and the snatch18.

This helped us in comparing the effects of core stability and plyometric workouts on pain and impairment in non-specific LBP in athletes. Athletes employ core strengthening and plyometric workouts to lessen pain intensity and handicap associated with non-specific LBP19. Here is discovered that one of these two types of therapies was more helpful in treating non-specific LBP in athletes. In a country like Pakistan where sports are an emerging field and health, and performance of athletes is usually neglected so there is a need to find the best option for management of LBP and improving function.

Null Hypothesis: There is no difference between effects of core stability exercises and plyometric exercises in reducing pain and disability in athletes with non-specific low back pain.

Alternate Hypothesis: There is difference between effects of core stability exercises and plyometric exercises in reducing pain and disability in athletes with non-specific low back pain.

The study was randomized controlled trial in which data was collected by 38 professional athletes to compare the effects of core stability and plyometric exercises in athletes to improve pain and disability in non-specific low back pain. The sample was randomly divided into two groups, Group A and Group B by lottery method. Each group contained 19 participants. The duration of study was six months after the approval of synopsis. Participants were included on basis of inclusion and exclusion criteria. Inclusion criteria were based on both genders having age between 20 to 40 years. Diagnosed mechanical low back pain and on MODI scale having mild to moderate impairment up to 40% and with VAS score of mild to moderate pain were included in this study. While according to exclusion criteria athletes who were having any pathology off spine, history of trauma, any abdominal surgery or any prior core experience of core strengthening exercise program were excluded in this study. By 5% level of significance and 95% power the calculated sample size was 38. Each group contains 19 participants. Group A receive core stability exercise program and group B receive plyometric exercise program. Visual analogue scale and Modified Oswestry Disability Index were used as data collection tools.

Athletes who met the inclusion criteria were included in this study. Informed consents were taken from participants after explaining them about research. It was a single blinded study. Total 38 subjects between ages of 20-40 years were selected. Before applying interventions on day one VAS and MODI were measured. Both groups were advised to complete 5 minutes of warm-up exercises, which included spot jogging, free exercises, and gentle stretches with 15 second hold.  For the first week, Group A was required to execute these exercises for 6 reps, and thereafter the reps were raised by 50% until the eighth week. • First week – 6 reps • Second week with 9 reps • Third week – 12 reps • Fourth week – 15 reps with 5-10 sec hold • 18 reps in the fifth week; 21 reps in the sixth week; 24 reps in the seventh week • Week eight – 27 repetitions with a 5-10 second hold

2-3 minutes rest time was considered with proper stretching in between sets of activity. Athletes were requested to undertake cool down exercises include aerobic workouts and stretching exercises, at end of each day exercise programme. Before beginning the next training session, the subjects were asked if they had any discomfort. Test scores for all groups were measured using the same assessment instruments at the end of a 4- and 8-week core stability training programme. The posttest values of two groups were compared at the end of the study.

SPSS software version 25 was used to analyse the data in current study. P = 0.05 was set as statistical significance. P = 0.05 was set as statistical significance. Independents test was used between group analysis. Friedman ANOVA was used to show change of subjective as well as objective measurements over time. Between groups comparison at baseline, after 4th week and 8th week was made by using Mann-Whitney U Test.

Shows within group comparison in which Pre, Post 4th week & Post 8th week of MODI among Group A (Recreational) and Group B (Competitive) were mentioned. 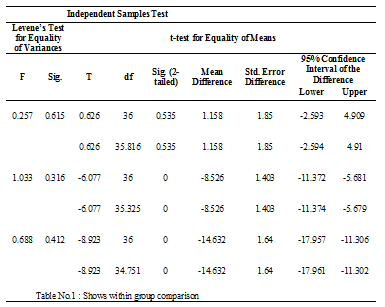 Pre-treatment values were taken for both core stability group and for plyometric exercises group. At the end of 4th and 8th week their values were again measured by MODI. Table shows significant results as p-value is (.000). 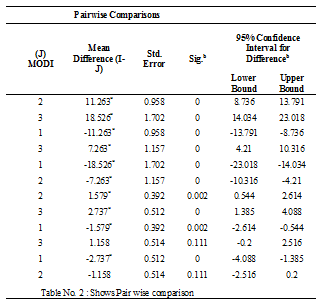 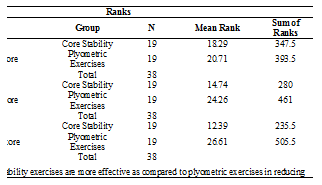 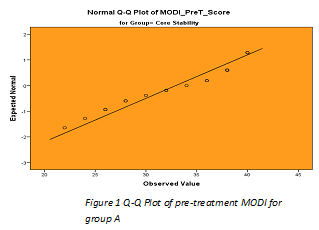 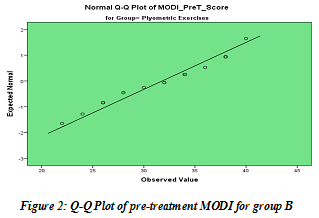 Akuthota, Venu, et al. worked on Core stability exercise principles and that is indicated by its vast range of therapeutic applications, core strengthening has a strong theoretical basis in the treatment and prevention of LBP, as well as other musculoskeletal diseases. These programs have been shown in studies to help patients with Alzheimer’s disease reduce discomfort and enhance function. This study elaborated the effects of core strengthening exercises in the management of LBP. Present study concluded that core stability exercises are very effective for pain management and performance improvement22, 23.

A study conducted by Neff, Shawn. Focusing on the Most Effective Exercises for Low Back Pain was also in agreement. It carries out research aimed at the prevention of pain in the lower back. It turned out that some of the exercises that are the best to strengthen the muscles and assist in the prevention of the recurrence of pain in low back17. Another study was conducted focusing on the physiological responses and therapeutic application of plyometric exercise in the rehabilitation of athletes. As a result, plyometric exercise has been suggested as a means of bridging the gap between standard rehabilitative exercises and sport-specific activities24, 25.

The present study reflected that both core strengthening and plyometric exercises are effective in improving pain and disability in non-specific LBP as within group comparison showed via data analysis but core strengthening exercises are more effective for pain management. There is less literature available regarding plyometric training in treating LBP in athletes. This present research is done to find the best exercise and results showed core stability exercises are more effective in treating LBP, decreasing pain and improving function. In future coaches and sports physiotherapists should include these exercises in training athletes to prevent LBP.

It is concluded that core strengthening exercises are more effective than plyometric exercises in reducing pain and improving functionality of athlete.

The main limitation of this study was that it could not investigate the long-term effects of sub occipital muscle energy techniques and neck dynamic stabilization exercises. It is recommended that further studies should be conducted with larger sample size and follow up assessments to ensure the generalizability of the study.