BACKGROUND AND AIM: Physical inactivity and obesity are the two emerging problems in Pakistan. Schools have been identified as an essential setting for health promotion through physical activity participation. Many schools in Pakistan mainly concentrate on the higher study level and insufficient attention towards children’s physical health that may impair due to low physical activity level and increased sedentary behavior leading to obesity and other health issues. The study aims to assess the level of physical activity in school children.

METHODOLOGY: A cross-sectional exploration was lead at schools of district T. M.Khan Sindh from Oct-2019 to Feb-2020. Raosoft Tool was used to a calculated sample of the study. The instrument utilized for information assortment contains the Physical Activity Questionnaire for Children (PAQ-C) to survey active work. Information was entered and broke down by the SPSS-22 version.

CONCLUSION: The survey indicated that school-going children have no physical activity to a low level of Physical Activity.

From 1985 to 2014, constantly increment paces of stoutness has been found in Chinese kids. The yearly mean increment pace of weight was the most elevated rate in 2010–20147. Urban children are more likely to tire down with obesity, and the obesity rate in these children was increased from 1995–2005, with a per annum increase 6.9%8. In rural areas, the obesity rate rose from 0.71 percent in 1990 to 1.21 percent in 2006.9 The majority of these obese teenagers have experienced varying degrees of self-esteem loss, often accompanied by mental health issues such as worry, stress, loneliness, and high-risk behavior.10 After maturity, 75–80 % of obese teenagers, have remained flat, and obesity continues to encourage the development of diabetes11.

Regular physical exercise can help entirely USA population, even those who are overweight or obese, improve their health and quality of life15. Even minor improvements in physical exercise have been linked to health advantages in those who are inactive15. Healthy People 2020’s physical activity goals are based on the 2008 Physical Activity Guidelines for the USA, which suggest that kids or youths get somewhere around an hour (60 minutes) of day-by-day physical activity. With most of it being moderate-to enthusiastic power high-impact actual work that comprises for the most of moderate-to energetic force oxygen-consuming busy work and that incorporates positive force proactive tasks (no less than 3 days out of every week), muscle-reinforcing proactive tasks (something like 3 days of the week), and bone-fortifying proactive tasks (no less than 3 days of the week)16.

To increase physical activity and reduce sedentary habits among kids, communities must collaborate with schools and families to offer safe, attractive, and accessible areas where they may be active close to home17. the goal of this study was to find out about physical activity among school-aged youngsters.

Data Collection Procedure: The approval was taken from the IRB, and permission was also sought from the administration of schools to collect data. Self-structured Questionnaires were generated to get demographic information of subjects. The questionnaire used to assess Physical Activity level in children was Physical Activity Questionnaire (PAQ-C) that recall and assess physical activity of childrens in last 7 days , weight measure in Kilogram thorugh weight machine(Model-MB1010) and measuring-tape was also used to measure height in meters. The main thing is an activities agenda, which incorporates sports, recreation exercises, and casual games. The remaining items (2-8) assess activity during specific periods of the day, including PE class, recess, and lunch, immediately after school, evening and the weekend as well as two additional questions that assess overall activity pattern during the week. The ninth item concerns the frequency of performed activities (games, sports, dance) each day during the week. Body Mass Index was used for comprehensive health assessments to check for obesity, overweight, health, or underweight status. Consent was taken from every subject before participation in the study.

Data Analysis: Data was entered into SPSS version 22, and a Chi-square test was used. Results were presented in frequency and percentages

The age Mean±SD of the members was 13.79±1.52, BMI esteems were found as 41.5% of kids with Normal weight, 2.5% obese, 10.3% overweight, and 45.7% found underweight. Fourteen unique exercises including Cricket, Skipping-rope, Tag-game, Walking for work out, bicycling, jogging or running, swimming, Dancing, football, badminton, volleyball, hockey, basketball, and ice-skating, level of every action show Heat’ map in table 1.  Level of active work for every day in last week including Mon, Tues, Wed, Thurs, Fri, Sat, and Sun displayed in table 2. The active work level during actual schooling classes for the last 7days was displayed in table 3.

Table 1: Heat-map of activities during the previous seven days 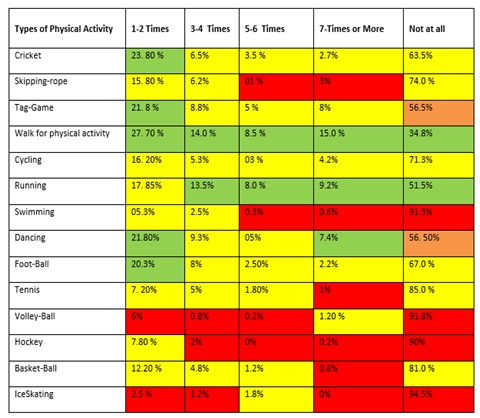 Table 2 shows the Occurrence of activity level for each day of the previous week. 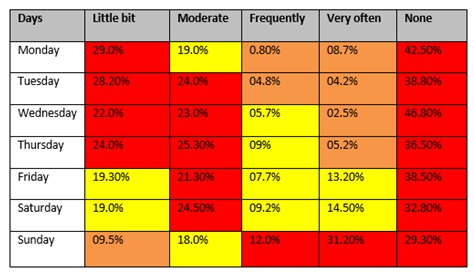 Table 3: Shows level of physical education (PE) periods for the past 7days and during recess and besides lunch 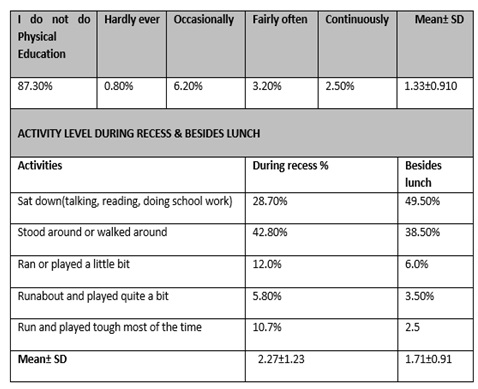 In our study, we assess the Physical Activity using PAQ-C inspector closeness, not set in stone means Physical Activity score, using the Physical Activity Questionnaire (PAQ) for youngsters and Adolescents. This questionnaire is based on quantitative data  collected by the likert scale components that usually conducted with follow up of seven days, taking into account scores got from eight things in the survey21. An Global survey conducted in 2020 by Salome abbert et al that concluded that defiecny of physical activity observed in childrens and adults that raises a serious concern about their general health22. Youngsters had a mean PA ordinariness of 22.3%, with France having the least PA rates (11.2%) and the United States, the most raised (41.8%). Another audit coordinated in the United States in 2005 found that 57% of Adolescents youngsters and 40% of Adolescent young women developed from 14 to 17 years to be Physically Active23.

A study conducted by the jamil ahmed at al in 2016 to see the role of paretal and schools on physical activity and school going children that also conldued that out of 501 participants, 40% of subjects usually walk or use bicyle to come to schools in hydrabad while they spen 5 to 6 hors per week in moderate to hard physical activity26.

The conclusion of this study indicated that Pakistani children have no physical activity to a low level of Physical Activity. It has marked that there is a huge gap in the literature to determine the impact of physical inactivity on the behavior and health of childrens. Future studies should be followed on larger scale to assess physical activity in childrens and other provinces should also include in the study.