The present study describes the determination of a possible correlation between CK and myoglobin levels, in addition to the hypothesis that increase in myoglobin concentrations may precede changes in CK levels in patients suffering from myopathies.

The inclusion period for this cohort study was from December 2005 to December 2007. Patients who met the laid down and referred criteria were eligible for the study, which includes patients aged > 20 years to < 75 years (both gender) and had a diagnosis of myopathies as per description. Standard protocols were followed for blood samples collection and estimation of aldolase, CK AST, ALT, CK and myoglobin levels. Regression correlations were determined and results were compared as per R2 and significance level P < 0.05.

A total of 48 patients were included in the study, males = 32 (66.66%) and females = 16 (33.33%). Except for both CK and myoglobin, the rest of the enzymatic components were not found to be linearly correlated showing R2 factor less than 0.0012. Notably CK and myoglobin levels, when plotted through regression, were leading with exceptional correlation, with R2 0.491 for total patients, R2 0.512 for males and 0.532 for females.

It was suggested that by combining both CK and myoglobin estimation in patients with myopathies especially dermatomyositis or polymyositis, it provides better overall impression of muscle damage and related conditions.

Correlation of CK and Mb levels in myopathies.

It is a known fact that myopathies are neuromuscular disorders depicted by the primary manifestation of muscle weakness related to dysfunctional muscle fiber. Moreover, myopathies can be inherited (such as the muscular dystrophies) or acquired (such as common muscle cramps). Generally, myopathies are grouped as congenital myopathies, muscular dystrophies, mitochondrial myopathies, glycogen storage diseases of muscle, dermatomyositis (DM), myositis ossificans, familial periodic paralysis: polymyositis (PM), including body myositis, and related myopathies and tetany.

In this context the analysis of muscle enzymes such as creatine kinase (CK), transaminase enzymes including aspartate transaminase enzymes or aldolase, including myoglobin determines the presence and extent of myopathies1-5. It is well documented that concentration of circulating CK is the laboratory parameter most widely used to diagnose and follow the patients with DM or PM or related myopathies because of its high dimension of sensitivity, relative muscle specificity, and good correlation with disease activity and muscle strength 2,6-8. However, it was argued that independent assessment relating only to serum CK levels might never be an alternate for a systematic review of the patient, which includes muscle strength and functional assessments, as done for the measurements of myositis disease activity2. Moreover, there are certain other consistent attribute regarding CK levels, one of which is its continual elevated concentration at some point in the illness, thus making it prone to bias. Therefore, to aid in the diagnosis and treatment in myopathies, researchers, scientists and clinicians searched for other parameters as well and noted that myoglobin is one of such biochemical markers9.

There were few significant preliminary studies reported earlier on the importance of determination of serum myoglobin levels in patients of PM, DM and generic myopathies, in addition to serum enzyme such as CK, suggesting that changes of myoglobin levels may facilitate or even precede alterations of creatine kinase and clinical features1,2,10-12. Therefore, the present study was undertaken to determine possible correlation between CK and myoglobin levels, in addition to the hypothesis that increase in myoglobin concentrations may precede changes in CK levels in patients suffering from myopathies.

The inclusion period for this cohort study was from December 2005 to December 2007, of which data were collected retrospectively from November 2006 to Dec 2005 and prospectively from Dec 2006 to Dec 2007. The study was a collaborative venture between departments of biochemistry lab services and Physiotherapy services. Patients who met the following criteria were eligible for the study. Thus, the inclusion criteria were patients aged > 20 years to < 75 years and had a diagnosis of myopathies as per description5,13. Importantly, patients must not have had any proximal muscle weakness. Muscle strength was checked according to the eight manual muscle testing (8-MMT)5. Exclusion criteria were patients aged group < 18 years and > 75 years with proximal muscle weakness (8-MMT score ≤72) and known immunosuppressive condition including other clinical conditions such as infections, hypothyroidism, hepatitis, chronic haemolysis, recent myocardial infarction (less than threemonths), or recent leg or arm trauma5.

Data of a total of 46 patients (males = 32, females = 16) were obtained and complied as per criteria. Where possible, data was also collected from LIS and HIMS archives. Following data were collected: age, gender, description of myopathies, disease duration and previous history of CK myoglobin levels or any other muscle enzyme or related components. 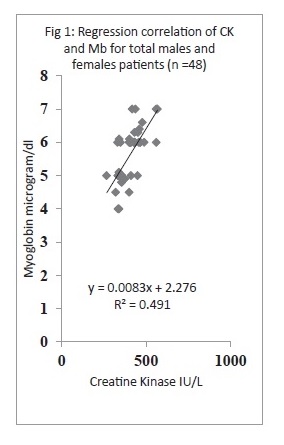 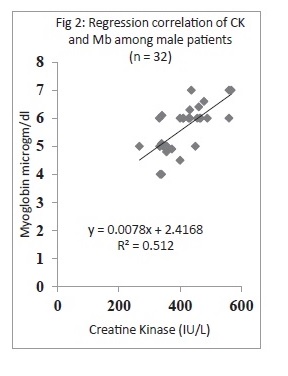 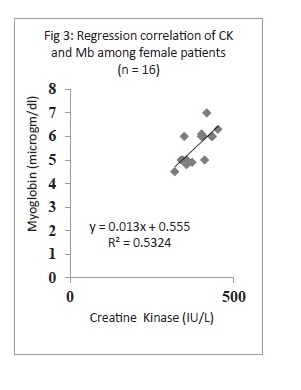 It was documented that the levels of several enzymes such as aldolase, lactate dehydrogenase (LD) and its isoforms 5 and 1, and transaminases (both serum glutamic oxalacetic transaminase [SGOT]/aspartate aminotransferase [AST], serum glutamic pyruvic transaminase [SGPT]/alanine aminotransferase [ALT]) and carbonic anhydrase III in serum were noted to be increased in patients with myopathies during active muscle disease1,2,5,10,11. However the extent of increase in all of these enzyme activities occurs less frequently and to a smaller extent as compared to CK levels2,14-16. Furthermore, the enzyme components namely LD isoenzyme 5 is associated with skeletal muscle2,16 but elevations in the levels of LD isoenzymes 1,2, and 3 may occur with chronic myositis as well 17,18. On the other hand, carbonic anhydrase III, which is located in type I muscle fibers, is also frequently elevated in patients with IIM and other diseases associated with skeletal muscle damage 2,19,20, thus illustrating non-significant clinical correlation.

In this regard, two previous studies suggested the importance of estimating CK and myoglobin in patients with myopathies that noted would be more beneficial when correlated with each other than any other enzymatic or muscle components 1,10,21. It was also reported earlier that serum Mb and CK levels have similar values as indicators of muscle damage in primary and secondary skeletal muscle disorders. Nonetheless, it was argued that, the serum Mb level helps more in the detection of carriers, however is not more sensitive than CK measurement21. Additionally, it was documented that muscle damage due to excessive exercise leads to an increase in myoglobin levels thus depicting its sensitivity as a direct parameter for assessing acute muscle damage1. Nevertheless, combining both CK and myoglobin estimation in patients with dermatomyositis or polymyositis provides better overall impression of muscle damage 1,21.

Henceforth, the present study describes correlation studies of CK and myoglobin levels of a total of 48 patients (males = 32 (66.66%) and females = 16 (33.33%)) where levels of CK, CRP, aldolase, AST, ALT, CK and myoglobin were measured to assess its correlating abilities more significantly towards muscle damage and myopathies. It was noted that except CK and myoglobin the rest of the component were not found to be linearlycorrelated where R2 factor was less than 0.0012. Notably CK and myoglobin levels, when plotted through regression, were leading with exceptional correlation, with R2 0.491 for total patients, R2 0.512 for males and 0.532 for females, thus depicting 49%, 51% and 53% existing correlation with elevating levels of both components.The mean CK levels for males was 401.43±72.50 IU/L (range 267-567), for females was 397.37±60.25 (ranges 320-560) IU/L and for total patients, 400.80±96.20 IU/L, whereas myoglobin concentrations were 5.58±1.10 μg/dl (range 4-7), 5.56±1.23 μg/dl (4.5-7) and 5.59±1.45 μg/dl for males and females and total patients. Supporting our findings, the two previous studies mentioned earlier1,10,21 reported the significance of combining CK estimation with that of myoglobin concentration. Giampietroetal categorically stated that myoglobin and creatine kinase have proved to be the best indicators of the hypothyroid myopathy, since they are sensitive for the early detection of muscle involvement due to the metabolic disorder and are closely correlated to the metabolic conditions of patients 10,22.

Regarding muscle-derived CK activity in patients with PM/DM, the levels of CK and other muscle-derived enzymes in serum are generally useful in following myositis activity and responses to therapy, although the magnitude of the elevation does not always correlate with global disease activity (Rider and Miller, 1995; Straus et al., 1989)2,6. Past and present studies also suggested inclusion of other enzymatic components for the same purpose. For example in a cohort study, it was found that elevated plasma aldolase at inclusion was an accurate marker that helped to identify SSc patients. However, other components such as AST and CRP were not able to predict subsequent Myo-SSc occurrence5. The reason provided for defiant elevation in serum CK levels in patients with myositis was due to increases in the MM-isoenzyme fraction which is released from skeletal muscle2. Persistent elevation of MB levels is commonly seen in patients with skeletal muscle damage but not in patients with myocardial infarction2,8,23. The levels of macro-CK type 1, a complex of a CK isoenzyme and immunoglobulin, are elevated in patients with myositis in comparison with the levels in patients with heart disease, infections, malignancies, and other disorders2,24,25 although the correlation of macro-CK levels with disease activity remains to be determined. In a very significant study reported earlier by Diószeghy and Mechler, serum creatine kinase (CK) and myoglobin (Mb) levels were measured in patients with different neuromuscular diseases, carriers of X-linked Duchenne-type muscular dystrophy and normal volunteers21. The highest levels were found in Duchenne dystrophy and both values decreased in parallel with age. In patients suffering from limb-girdle dystrophy the increases in CK activity and Mb concentration were also pronounced, thus supporting the outcome of our cohort as well.

It was thus concluded that by combining both CK and myoglobin estimation in patients with myopathies especially dermatomyositis or polymyositis, it provided a better overall impression of muscle damage and related conditions