Sciatica is described as pain, radiating to the leg below the knee joint and caused by irritation of the sciatic nerve or nerve trunk. There are many treatment options for the management of sciatica, including stretching exercise and neural mobilization.

This study was a Randomized Controlled Trial. 94 patients from physical therapy OPD of tertiary care hospitals, were participated in this study. Hence, 47 patients were randomly allocated into each group A and B. Before and after the nine treatment sessions, both groups were assessed with VAS, SLR ROM and Quebec back pain disability scale. In group A, neural mobilization with conventional therapy (heat and TENS) was applied, while stretching exercise with same conventional therapy was applied to group B.

Stretching exercise is more effective in the improvement of SLR and disability. Furthermore, both techniques are helpful in the management of pain.

The lumbosacral radicular syndrome (LRS), which is well renowned as sciatica, is a condition that is pigeonholed by the pain radiating in the leg below the knee joint, covering one or more than one dermatomes. It can be escorted by occurrence of the nerve root tension or nervous deficits14. Disorders related to the lumbar spine are the fifth most mutual disorder in the classification of diseases and in the cost of hospital care. In Netherlands, occurrence of the sciatic pain is estimated about five out of thousand persons in a year5. Sciatica accounts for larger expenses, ensuing in the inattentive from job and disability, than any other nature of disease. Disability interlocked to the LRS, subsidizing to a substantial economic problem, so that every year only in U.S. it goes directly above just about fifty billion. Health associated disbursement in people with LRS is also sixty present bigger as compare to those people who are not affected with LRS6. In many studies, it has been revealed commonly that general practitioners did not follow the approaches related to the recommendation to Physical therapy (PT). Usually, lesser amount of the clients with LRS was referred for physical therapy7. Furthermore, knowledge about the effectiveness of physical therapy treatment in LRS is not known commonly8. Radiculopathy is pronounced as a pain initiating in the nerve or nerve trunk and triggered due to the unknown provocation of nociceptive afferent filaments in the spinal nerve or in the roots or by further neural related contrivance. Rendering to the above explanations of sciatica, this situation is undoubtedly define as the method of radiating pain and that one designated as a peripheral nervous system 9-11 related condition. Overall Sciatica is a mutual situation and through the life time prevalence of sciatica in whole life of a human fluctuating from thirteen percent to forty percent12 and the universal annual frequency of the sciatica is from 9.3 to 25 percent13.

The Domenico Cotuga, an Italian anatomist (1736-1822), composed the 1stbookon sciatica in 1764 and for a long time sciatica was written as Cotugno’sillness14. Cotuga was the main person who explained the amendment between the sciatic pain and throbbing pain linked to the LBP. In nineteenth century, it was alleged that sciatica is instigated by rheumatism disorders and lead to the swelling of the sciatic nerve14. The disc located between the vertebrae, was first determined the rooting cause of sciatica in the 20th century by Schmorl and Andrae15. Many studies publicized that many environmental and inherent characteristics presumed to be the basis of sciatica, such as age, genetic factors, and occupation16- 19. A Cross-sectional research was done on two thousand nine hundred forty six women and two thousand seven hundred twenty seven men. It disclosed that male or female, not mass of the body partaken any impression over the development of the sciatica but over body mass has been interrelated to the low back pain16. There are many components related to the treatment of sciatica, comprising analgesic medication, manipulation, surgical decompression and variation in the treatments delivered by physical therapy, including specific condition related exercises, functional rehabilitation, manual mobilization techniques and manipulation, electrotherapy, mechanical machines and other physical components20.

Neurodynamics is a more predictable word, indicates to integrate biomechanics of the tissue, physiological and morphological functions related to nervous system. Regardless in the fundamental theory, established that nervous system is proficient to become accustomed to the mechanical loads and its must go through contradictory mechanical actions including lengthening, sliding, cross-sectional alteration, angulation and compression. These self-defending systems become unproductive. The nervous system predisposed to inflammation, decreased blood supply, fibrosis and that leads to the decreased oxygen consumption 21,22. All these factors can transform neurodynamics. When neural mobilization is used for treatment of confrontational neurodynamics, the fundamental goal is to endeavor the refurbish dynamic stability in the comparative motions of nervous tissue and the adjoining mechanical interface23. In this manner, it lowers the central burdens on the nervous material and therefore assembles the most adequate physiological effect. The benefits that result from this procedure include acceleration of nerve gliding, decline in the nerve adherence, spreading of pain causing substance, improvement in neural circulation and enhancement of axoplasmic flow. Additionally, Lopes et al established that the Neural Mobilization procedure leads to enriched muscle power of the quadriceps muscle that may be interrelated with increased axoplasmiccirculation24. Furthermore, study focused on technique used with rats having neuronal pain that was assessed by the computerized test. It stated that the neural mobilization procedure leads to the refurbishing of sciatic nerve by aggregate the appearance of zero nerve growth factor25.

Stretching is the most collective maneuver utilized in many rehabilitation events. Stretching is ordinarily given to increase muscle flexibility, range of motion (ROM) and for the management of pain. Chan and colleagues26 categorized that eight weeks of continuous static stretching can increase muscle extensibility, flexibility and range of motion, related with an upsurge in stretch tolerance of the muscle. Stretching is a common program performed by sportsmen, geriatric peoples, any person involved in a health related or rehabilitation programs. Despite the fact, neural mobilization and static stretching exercises are beneficial properties by faltering outcomes obtainable in the literature27. A study which was completed by Saher M, in journal of American science 2011, authorizes that straight leg raising (SLR) stretching may be valuable for the treatment of clients with low back dysfunctions28.The SLR test is universally done for the evaluation of clients having complaint of lumbar spine dysfunction and included in the limited pointers that have been publicized to discriminate the point of functional disability from low back dysfunctions29. Likewise, it has been pointed out that enlightening the range of SLR has boundless end product in persistent normal movement and plummeting the degree of impairment due to low back dysfunction. The focus of this research was to determine the effectiveness of neural mobilization and stretching exercise on patients with sciatica and evaluate the most effective treatment for the sciatica.

The design of this study was Randomized Controlled Trial (RCT).

Duration of the Study

Total duration of the study was one year.

Male and female patients with complain of sciatica; aged between 20 to 60 years were included. Patients with low back pain, having symptoms from two weeks to three month and the production of symptoms on nerve tension test, that is, SLR must be 35 degrees or more were included in this study.

Patients who planned migration to another city or country within one month or involved in any other physical fitness program were excluded. Patient with RED FLAGS (tumor, osteoporosis, spinal fracture, metastasis), or having history of major systemic and psychological illness (depression, schizophrenic) were also excluded from this study.

Patients were finalized with some self-reported measures, followed with a client medical background and physical assessments accomplished with the help of physical therapist.

The history consists of demographic information (such as age, gender and occupation), past medical history, location and nature of symptoms, previous episodes of symptoms, relieving and aggravating activities and leisure activities.

Pain and Other Symptoms

Patients detailed the area of their symptoms on the body chart to define the extent to which centralization occurred before treatment, which was determined according to the procedures described by Werneke et al30. The visual analogue scale (VAS) consists of ten numerical numbers starts from zero (no pain) to ten (intense pain) and was used to determine the intensity of pain from its lowest to intense degree31.

The activity of daily living of every client was checked by Quebec32 Back Pain Disability Scale. This consists of 20 variety of queries related to LBP and disability in daily activities. For every query, the client ticked one choice from the six options that accurately explained his or her disability. If the 1stoption was mentioned, then the score is 0, if the last option was mentioned then the score is 5. The minimum score is 20 and the maximum score is 100. Higher scores correlate to greater disability. The score was calculated with the help of following formula: Percent of maximal disability = ((score) – 20) / 80 * 100%

The range of motion of hip joint for sciatica was measured with the help of goniometer by performing SLR.

At the finishing point of 9 physical therapy sessions, clients of treatment groups (group A and B) were re-examined with the help of VAS, SLR and Quebec back pain disability score.

Data was analyzed using the SPSS version 20. Mean ± Standard Deviation (SD) was calculated. Independent t-test was applied to compare the improvement between group A and group B, through VAS, ROM of SLR and Quebec back pain disability scale, before and after the 9 sessions of treatment.

94 patients were taken into two groups, 47 in each group A and group B. Group A was treated with the neural mobilization, and Group B was treated with the stretching exercises. At zero session and at the end of the 9 treatment sessions, visual analogue scale, range of motion of SLR, and Quebec back pain disability scale were measured and the data was analyzed by independent t-test.

After nine sessions of treatment, patients of both treatment groups have showed improvement in SLR, VAS and Quebec back pain disability scale, as it is revealed by the Mean ± SD of the pre and post treatment. Both neural mobilization and stretching exercise were found to be effective in decreasing the pain on VAS to 2 from 7.4 and 7.8 respectively, and showed no significant difference between both treatments, as the p-value is more than 0.05. The analysis showed significant improvement in the SLR (60.851o± 6.86o) and Quebec back pain disability score (23.617 ± 3.125) in the group B, that was treated with stretching exercise, as the p-value is less than 0.05. 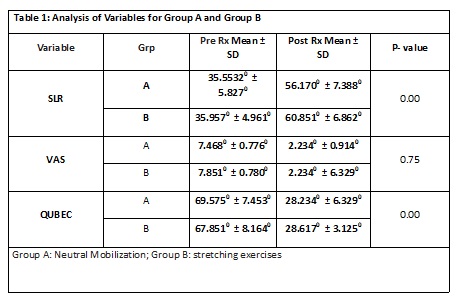 This study was a randomized control trial that was done on sciatic patients. The results of this study commend that straight leg raise stretching was helpful to treat the patients having complaint of sciatica. Furthermore, conventional therapy of heat and TENS was also used in this study along with the stretching exercises. At the end of the nine sessions of the stretching exercise (group B), great improvement was observed through visual analogue scale, range of motion of SLR and disability scale. In this study stretching exercise was found to be significantly effective in improving the range of motion at hip joint, that is, SLR to 60.851o ± 6.862o from 35.957o ± 4.961oand reducing disability score to 23.617 ± 3.125 from 67.851 ± 8.164.

This study was limited by many factors, such as use of only VAS for assessment of pain, SLR measurement through goniometer. The patients that had symptoms at less than 35 degrees of SLR were excluded from the study. In addition to this, difficult inclusion criteria were used, while if patients did not establish the classic signs and symptoms of sciatica they were excluded from the study. One more limitation that noticed during the study is the ideal position to attain for an effective stretch for the sciatica is not known. Further studies are essential to explore optimal lumbar spine conformation that would further elaborate the SLR stretch. For the treatment of the individuals with sciatica, this study supports the value of the SLR stretching, as we found that the stretching exercise is magnificent than the neural mobilization.