Stroke is the progressive neurological disorder with the global prevalence of around 2.67%. Many patients with hemiplegic stroke encounter mobility restriction, particularly having difficulty with independent walking. Pressure Workload exercises will help to improve active daily living (ADLs), balance problems and muscular weakness in stroke patients. The present study aims to identify the effects of pressure workload exercises on reducing functional limitations and disability in stroke survivors.

A Randomized control trial (RCT) was conducted on sixty (60) patients recruited from the outpatient departments of different hospitals in Karachi. The patients were randomly assigned in one of the two groups after making the initial assessment on Barthel index. Control group received conventional physiotherapy treatment including active or active assisted range of motion exercises, stretching of upper and lower limbs, weight bearing and balancing exercises whereas the experimental group received pressure workload exercises of upper and lower limbs and 20 minutes gait training.

The study concluded that pressure workload exercises are more effective in improving the quality of life (QoL) among hemiplegic patients and are found to be more potent in comparison to conventional physical therapy approach in improving the Activity of Daily livings among the stroke survivors.

Stroke is the progressive neurological disorder in which there is a focal or global impairment of cerebral function that lasts more than 24 hours and can lead to long term disability that compromise the sensory and motor function 1,2. American stroke association estimated that around 87% are ischemic stroke and about 13% strokes are hemorrhagic3.

Many patients with hemiplegic stroke encounter mobility restriction at home and in the community, particularly have difficulty with independent walking4. Hemiplegia causes weakness, balance problems which leads to gait disturbance. It has been revealed that muscle strength is related with gait performance5. Due to damage in the cerebral cortex, extremities function is poorly affected and the patient is unable to perform activity of daily living (ADLS)6. As central nervous system is major issue which cause abnormal muscle tone, muscular atrophy and weakness, balance and coordination problem postural disorders and asymmetrical movements4. The motor impairments that a result due to stroke interferes with the independence of the patient while performing both functional activities and ADLs7. Due to loss of motor function, patient does not recover and ultimately it results in permanent disability6. Motor relearning can be done to improve function and spontaneous recovery which causes neuroplasticity of brain by giving different intensive task depending on the severity of stroke8.

In most of the cases physiotherapist encounter difficulties in motor relearning due to shoulder pain which is mostly experienced by hemiplegic patients approximately 70-80% that hinders the patient to participate in rehabilitation program. The restricted range of motion and pain in shoulder joint may limit the participation of individual in ADLs and IADLs9. Weakened shoulder joint is a common problem for the patient with hemiplegia10. Resisted manual exercises for abductors and external rotators of shoulder, trapezius, serratus anterior and supraspinatus of scapula significantly decrease lateral spinal deviation angle in sitting position3. Approximately one-third patient suffering from stroke have severe  arm paresis. Therefore, active assisted movements should be performed on affected limb. Somatosensory deficit is seen in critically effected arm11. The paralysis of extremity makes difficult for patient to perform their routine activities like reaching, grasping, eating, and bathing, combing and dressing12. Hemiplegic patient experienced paralysis of both sides of trunk which makes difficult for individual to maintain erect posture during static and dynamic movements13. Several lower extremity muscles are much affected for example knee flexor compartment has been shown to be severely worsen which in turns affects the walking ability of the patient and consumes double energy as compared to that of healthy individuals14,15. Patients with stroke also have difficulties due to paralysis of ankle dorsi-flexors and plantar-flexors which decrease the motor function and balance due to decrease in muscle strength16.

Commonly used scale for the assessment of motor functions is Fugl-Meryer assessment of physical performance (FMA), Functional Independence Measure (FIM) and the Barthel Index scale which is used worldwide and has excellent sensitivity, validity and reliability17.

The rehabilitation of stroke patient is a multidimensional process encompassing interventions that are aimed to ease the substitution of restriction in participation and activity performance18. In-spite of severe disability and impairment during the early period of stroke many of the patients gain some degree of recovery over time19. The aim of rehabilitation is to focus on independence of patient which can be achieved through pressure workload exercises that can improve muscle strength and reduce spasticity3,20. Scapular stabilization exercises program strengthen upper extremity function in patients with hemiplegic stroke3.

Postural shift to the more affected area with weight bearing on the extended elbow and fingers and wrist in neutral position plays an important role in enhancing the proximal stabilization17. Most of the time trunk strengthening is neglected due to more focus place on extremities21. Trunk exercise have advantageous result in enhancing the stability and movement in stroke patients, they are principally effective in refining functional ability22. Bridging exercises under an unbalanced support that used sling equipment knowingly improves the lower extremity muscle strength along with core strength23. In most of the studies it has been found that there is moderate relation between gait speed and balance function24. A modified sit to stand training improves the balance function in hemiplegic stroke patient25. Hip extensor strengthening exercise program improves symmetry index of stance phase, walking speed and stride length and there was minimal increase in the paretic side stance phase in patient with hemiplegia4,26.

The patients are selected from the OPD setting of Ziauddin Hospital, Saifee Hospital North Nazimabad and National Medical Centre, Karachi.

Duration of the Study

The study is conducted over a period of 6 months.

Samples are selected through randomization by envelop method.

Data is collected by distributing questionnaire among patients.

Patient enrolled in the study after meeting the inclusion criteria. Before performing the exercises, patient’s vital signs are assessed and initial data recorded using functional activity assessment from prior to treatment and then recorded post treatment at the end of each session.

Pressure workload exercises were performed which are as follows:

All exercises were performed in functional ranges with 12-15 repetitions each lasting for 30 minutes once a day 3 times a week. Patients were also given home program which includes strengthening exercises. Consecutive improvement was recorded 3 times after every 4 weeks, at the end of 3 months and after 6 months.

Conventional physiotherapy treatments were performed which are as follows: 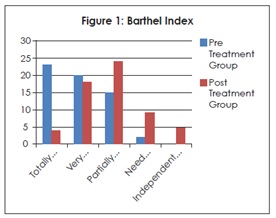 The results indicate positive outcome of the study representing an increase in muscle strength with pressure workload exercises without increasing muscle tone. Kim et al (2009) provided evidence in his study that resistive exercises using elastic band improves muscle performance of paralytic side. Teixeira-Salmela (1999) also reported muscle strength of paretic lower limb increased with muscle strength exercises27. A study by Shepherd (2001) also supported our results in the way that pressure workload exercises of affected muscles are favorable training methods in regaining neuromotor function and reducing the hyper activation of muscle and stiffness while maintaining the functional extensibility of muscle in stroke patients28. Patten et al. (2006) demonstrated that the combination of functional training and dynamic high-intensity resistance training is able to cause significant clinical effects. This training also promotes improvement in upper limb function and enhances quality of movement without side effects like aggravating spasticity and musculoskeletal damage29.

The study conducted by Amina Awad et al in 2015 reported that 6-weeks pressure workload exercises program for shoulder girdle muscles has beneficial effects in hemiparetic patients3. The study conducted by Chanuk Yoo et al (2015) assessed a method that is task-oriented training in improving ADL’S and hand function in stroke patients and he found significant improvement in ADL’s and hand function by task-oriented training30.

Hodges and Richardson (1997) said that contraction of multifidus and abdominals plays a critical role to stabilize spine in all the technical movements of lower extremity. Further Kim et al in 2015 supported our study by showing evidence that weakening of trunk muscles is considerable in patient with chronic stroke; therefore trunk activating exercises are crucial in the patient to promote their functional abilities31. Eun et al (2016) concluded that in stroke patient’s core muscle strengthening (CMS) and trunk neuromuscular electrical stimulation (tNMES) causes improvement in trunk balance21. Verheyden G et al (2006) reported that truncal exercises had

played a vital role to improve gait abilities of hemiplegic stroke patients by performing four weeks of trunk exercises consisting of abdominal hollowing, curl-up, bridge, and quadruped exercise affected muscle activity and spatiotemporal gait parameters. The gait of stroke patients is characterized by short stride length, slow gait velocity, and asymmetric gait pattern. Truncal exercises can improve the walking speed of stroke patients by increasing the stride length of the paretic side. However, the trunk training did not have a significant effect on improving gait symmetry. Hence our study mainly focuses on improving quality of life through resistance strength training exercises in hemiplegic stroke patients, so that they will perform activities of daily living independently32.

The recent study conducted by Nam et al in 2017 investigated that gait parameters and planter pressure in stroke patients by compelled weight shift training on the paretic lower limb side. This study explained two main factors consisting of 5 days per week, 30 minutes per day, for a period of 4 weeks. Whereas this study was consists of 15-20 repetition 3 day per week for a period of 3 months. However, the first factor in the study defines improvement could be result of compelled weight shift training achieved by adding lift to shoe on the lower limb of non-affected side. According to other studies by Rodriquez et al (2002), Suzuki M et al (2013), and Kobayashi M et al (2015), the center of gravity (COG) shifts from the affected limb side to the midline by the shoe lift which lead to increase the stability and equal weight distributions over the affected and non-affected lower limbs. The second factor shows that repetitive training feedback of sensory input could improve planter pressure distribution, and also improve gait parameter in patients with stroke33. As suggested by Sen SB et al (2015) that there is a significant improvement in the quality of life, mobility, gait and balance in stroke patient after bilateral isokinetic strength training of knee and ankle that only give emphasis on lower limbs, hence our study focuses on the improvement of daily living activities through pressure workload exercises on both upper and lower extremities in stroke patient that is not yet been emphasized in previous studies on this subject5.

The study concluded that pressure workload exercises are more effective in improving the quality of life (QoL) among hemiplegic patients and are found to be more potent in comparison to conventional physical therapy approach in improving the Activity of Daily livings among the stroke survivors.

[1]  Singhal S, Pattnaik M, Mohanty P. Comparison of isokinetic strengthening with functional strengthening of lower limb and their effect on gait in hemiperesis due to stroke. J Neurorebil Res. 2017;2(1):46-54

[6] Kim JO , Lee BH. Effect of upper extremity coordination exercise during standing on the paretic side on balance, gait ability and activities of daily living in persons with stroke. Phys Ther Rehabil