Globally, the prevalence of motor dysfunction among the pediatric population is 2.33 per 1000 live births where NDT is an advance treatment protocol widely used by the pediatric physical therapist to improve Gross Motor Function. Several measuring scales are used worldwide but GMFM score is considered as consistent, accurate, safe, and sensitive and gold standard. The aim of this study is to determine the outcomes of NDT according to GMFM score 66 and 88 in children with motor dysfunction.

40 children with motor dysfunction aged between 1 to 12

NDT is found to be more effective treatment among the DD and DS as compared to CP.

Gross Motor Function Measure (GMFM) score is a consistent, accurate, safe and sensitive instrument, to assess the gross motor skill in children with cerebral palsy1. The extent has been generally used in research and by other rehabilitation specialist to evaluate the gross motor function2. Both GMFM sheets are useful to find changes over time as in CP children of gross motor function. GMFM was used to analyze the progression of motor development from birth to five years 1,2. A well trained physical therapist applies GMFM when a child is asked to perform certain tasks in particular environment, the therapist observes those tasks and the best ability is noted3.

Assessment of motor skill is necessary to evaluate and modify treatment plan to improve the outcomes in children with CP. GMFM measure 66 and original 88 items version are suggested to evaluate the motor capabilities on the basis of activity in CP4. GMFM 66 has an additional advantage of being time efficient where it takes approximately 45 minutes of duration to complete the evaluation 1,4.

The GMFM contains 88 items which is divided into 5 Dimensions (a) sitting (20 items) (b) Lying and rolling (17 items) (c) walking, running and jumping (24 items) (d) crawling and kneeling (14 items) (e) standing (13 items)1,2.Score of each item has four points ranging from 0 to 3; where in 0 child is not able to initiate any activity or a task, Score of “1 and 2” shows limited performance, activity or a task Score “3” denotes (complete) in which child is able to perform 100% activity or a task. GMFM, a functional classification system, reports self-directed movements and measures results of interventions that are widely utilized4.

Cerebral palsy is a spectrum of disorder that compromises the person’s capability to maintain posture and balance5. A CP child experiences motor deficits like reduced strength, decrease ROM and increased spasticity6. Children with CP faces difficulty during walking, slow to rolling over, sitting, and crawling5. These deficits restrict the children from performing motor movements hence hindering ADLs6 making them more prone to develop deformities as are at risk to produce contractures due to reduced active movements7. Down syndrome is one of the common CNS disorder presenting with psychomotor activity of child and motor developmental delay8,9. Abnormal muscle tone, lax joints and tendons are a few reasons of motor delay in Down’s syndrome children8. Literature reveals that GMFM 88 has been a reliable tool used for the evaluation of Down syndrome8 but familiar environment is required for assessment to facilitate the production of task8. Salvali M et al concluded that GMFM-88 contributed a more appropriate measure in gross motor function of children with Cerebral palsy and Cerebral visual impairement9.

GMFM -66 has been considered as an advanced form of gross motor function measure10. Both GMFM score sheet are reliable instruments for assessing the functional activities of gross motor among CP child10.

Recently several studies has been investigated to show the effects of different physical therapy frequency based on neurodevelopmental therapy on gross motor functions using GMFM as a measuring tool. A study conducted by Park EY 2016, on 161 CP children in South Korea for 1 year using the NDT physical therapy treatment protocol and measured by GMFM for crawling, kneeling, standing walking, running, jumping and rolling11. Later on Park EY in 2017 conducted another study aiming to investigate the effectiveness of NDT treatment based physical therapy on muscle tone, strength and spasticity considering GMFM as their assessment tool among 175 children (88 diplegic and 78 quadriplegia).

Researches have shown strong evidences regarding Neurodevelopment treatment (NDT), as an effective treatment protocol for children suffering from CP12, Developmental Delay and Down syndrome13. It regains normal activities by inhibiting muscular tone and unusual posture and reflex. Physical therapy based on neurodevelopment treatment is highly successful in enhancing gross motor functions as well as reducing spasticity12. The object of NDT is to prevent abnormal movement and posture by inhibiting reflexes. NDT is a patient specific treatment protocol in which therapist perform task related movement and postures7. 246 children with CP has shown significant results in using GMFM-88 scores as an assessment tool14. Jooyeon K 2017 assessed the functional improvement after four weeks GMFM 88 item based training in CP children and diving into 3 age groups where CP children aged < 24 showed the most functional improvements after training on GMFM 88 scores revealing its importance to be implemented at the rehabilitation centers14.

40 known cases of Cerebral Palsy, Down syndrome and Developmental Delay.

This study was conducted on 40 participants including both genders, children of age 1 to 12 years. Participants were known case of Cerebral Palsy, Down Syndrome and Developmental Delay. The consent was taken from subject’s parents/ guardian before participation into this research. Participants were divided into two groups. Group A comprises of children with Cerebral Palsy receiving NDT protocol for 4 months; were assessed pre and post via GMFM 66 whereas Group B comprises of children with Down Syndrome and Developmental Delay receiving the similar treatment protocols; were assessed pre and post via GMFM 88. Each treatment session was of 45 minutes, 3 days in a week for 4 months.

Data was analyzed on SPSS version 20. Standard deviation, mean and median was calculated. T-test was used to find level of significance. GMFM score sheets were used for assessing motor function before and after 4 months of NDT.

Consent forms were received from the guardians/ parents. A secluded area was provided to the participants and study was explained in detail to parents. Assurance of confidentiality of data was given.

Out of 40 participants 22 children were CP whereas 18 were Developmental Delay and Down syndrome (Figure 1).

The mean of GMFM 88 and 66 (Graph I & II) were increased after intervention thus showing that NDT has positive effects on GMFM scoring specifically on GMFM-88. 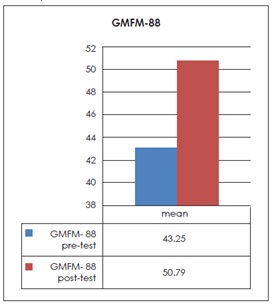 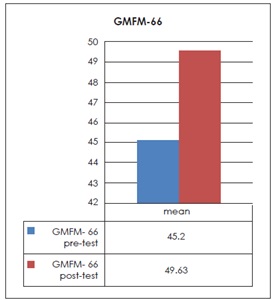 In a review done by Alotaibi et al suggests that to investigate changes in Gross motor functions in children with neurological dysfunctions, the effective outcome tool is GMFM score sheet16.

Almeid KM et al and Labaf S et al in their study stated that the GMFM score is an accurate and Gold standard tool which is used to assess the gross motor function in children with motor dysfunctions. Both GMFM score sheets are useful as an outcome measure to find changes in gross motor functions of children with motor disabilities. GMFM was used to analyze the progression of motor development from birth to five years1,2 which supported the results of this study as we used GMFM score sheets to find improvement in motor skills of the children with different neurological disorders having motor dysfunctions.

Malak R et al and Lee HS et al, both studied about GMFM and stated that GMFM 88 is for children with Down syndrome and other motor disabilities while the GMFM 66 is for the children with CP 8,10. Lee HS further stated that GMFM -66 is an advanced form of GMFM but both GMFM-66 and GMFM-88 are reliable instruments for assessing the functional activities of gross motor among CP, DD and DS children10.

Park EY et al told us about the disease that is cerebral palsy and further stated that cerebral palsy is a neuronal disorder which means problem with brain and it also includes problems with muscles and restrict their functions6. The major goal of rehabilitation in neurologically disable children is to decrease the rate of disability and improve motor functions which encourage social participation and independence17.

Park EY and Kim WH further discussed about, Physical therapy in CP focuses on the development of these gross motor functions so that the patient can perform ADLs independently12. Neurodevelopment therapy include static lengthen in muscles of lower limb, helps in decreases the tightness of the muscles, also ease the movement2. Lee KH et al said that intensive neurodevelopment treatment (NDT) remarkably improves GMFM in children with Developmental delay. Not only this, Intensive NDT also retained this improvement in GMFM scale13.

Study by Tekin F et al concluded that in diplegic and hemiplegic Cerebral palsy children, 8 weeks of NDT has a significant role in improving postural control18.Another study by Ari G on Bobath (NDT) techniques on children with spastic bilateral CP. He concluded that motor skills of the children improved after NDT intervention19.

Furthermore, Tupimai T et al analyze the quick outcome of the mixture of whole body vibration (WBV), passive muscle stretching (PMS), balance and strength in spasticity cerebral palsy patient. Positive result shown after the six-week session of the treatment on the Ashworth scale of spasticity, improvement were found on the balance scale of children. The static stretching of the muscle performed which has shown improvement in the stiffness of the muscles and also increased the strength of the muscle in the CP child20.

McLean B et al worked on sense training and they stated in their research that, the neuroscience- based Sense intervention is given to the treatment subject, the result of this treatment is to enhance the achievement of the object by the use of the bimanual extremities, and the sense of the relative position of their own body parts. The essential objective of this study was to make usefulness of applying the neuroscience-based Sense intervention on children with cerebral palsy and Down syndrome. The outcome show significant development in sensation of pressure, pain, warmth, treatment improved in motor functionality and also effective in developing daily living activities in hemiplegic cerebral palsy and Down syndrome21. This shows that sensory training is also important in improving motor functions in children with motor dysfunctions.

NDT intervention is beneficial in improving the GMFM after treatment and also effective in developing activities of daily living in CP child2. Lewis and Jessica in their research assessed that, gait speed and distance is greatly increased after a 6 minute walk test when applied on 12 years old spastic diplegic child for 20 weeks24. After 20 weeks of program the child exhibits little differences on GMFM 66 and GMFM 88 total score24. With the result from following study, this study supported that Diplegic CP of age 12 can respond to NDT effectively. The result of another research shows that ADLs and motor functions are significantly improved in CP after KT application especially in mild to moderate CP. However KT shows less effective changes in diplegic and hemiplegic CP22 as NDT is highly effective in Hemiplegic and Diplegic CP.

In a systemic review done by Dewar R about different interventions for improving motor and postural control of children with neurological dysfunctions. NDT improves standing, walking, running and postural control25. Similarly, in our study NDT has significant effects on motor skills of children with Cerebral Palsy, Down syndrome and Developmental delay. The limitation in the following study is some participants were excluded during the study because of many conditions like botulinum injection, surgery and pneumonia which may affect GMFM scores. Although GMFM is an effective tool, it is also time consuming and complex to analyze. In previous studies about Neuro-Developmental Therapy had been published with a follow-up of more than 4 months. Our study is supposed to have a significant role after 4 months effects of Neuro-developmental therapy. Therefore, further follow up researches should be organized to confirm the long and short term effects of different interventions in improving motor skills.

This study concluded that there is significant in motor skills of children with Down syndrome and Developmental Delay after 4 months of Neuro-Developmental Therapy measured on GMFM 88 score before and after intervention compared with children with Cerebral palsy after similar treatment protocol on GMFM-66.

Outcome After Intensive Rehabilitation in