Hypertension is a world health problem which is strongly related with cardiovascular disease (CVD) and premature deaths. The purpose of this cross-sectional study was to determine the prevalence of undiagnosed hypertension and associated risk factors among adults in Gajida town. The blood pressure (BP) of 364 participants was measured. Risk factors of high BP (age, gender, obesity, occupational stress, family history, educational level, dietary habits and smoking) were assessed. The data obtained was analyzed using both descriptive and interferential statistics. The descriptive (mean, standard deviation & percentage) and inferential (Pearson, Spearman & Mann-Whitney-U) statistics were used to summarize/analyze the data at P<0.05 using Statistical Package for Social Science (SPSS) (version 16.0). Out of 364 participants, 185 (50.8%) were males and 179 (49.2%) were females. On average, participant’s age was 33 years, systolic blood pressure (SBP) was 110 mm Hg, diastolic blood pressure (DBP) was 80 mm Hg and BMI was 19.96 kg/m2. About 153 (41.9%) of the participants were housewives and 138 (37.9%) were not educated. Prevalence of undiagnosed HTN was 23.6%. Gender, age, BMI, and educational level were found to be associated significantly (P ≤ 0.05) with HTN. Occupational stress, history of HTN, family history of HTN, dietary habits and smoking showed no significant relationship (p ≥ 0.05). A moderate prevalence of undiagnosed hypertension was found among adults in Gajida town. Hypertension is associated with gender, age, BMI, and educational level. There is a need to detect and manage cases of undiagnosed hypertension through regular measurements.

Hypertension (HTN) has been reported to be a major cause of global morbidity with devastating outcomes, and has significant financial burden on resources of health1. Bharati et al1 further stated that hypertension is a significant cause of premature deaths. Several studies2-4 have reported a worldwide prevalence of HTN. The studies showed that nearly one-quarter of world population between the age of 20 years and older live with diagnosed HTN and the trend increases with ageing.

According to Marwiro8 and Fernandez-Feijoo et al9, with increase in the systolic and/or diastolic BP, there is greater possibility in the risk of stroke, kidney disorder, coronary heart disease and damage to the eye. End-organ damage occurs as a result of chronic high BP. Despite all these complications, many people do not know their BP status. Marwiro8 justify that “the cost effectiveness of early hypertension diagnosis and strict control as compared to management of its complications and the losses incurred by the rural council in form of off-sick. Therefore, it is important to assess the risk posed by hypertension through determination of the awareness, prevalence and risk factors for hypertension and its complications”.

Hypertension has been linked with several risk factors (history of HTN in the family, smoking of cigarette, ageing, gender, African race, high BMI, physical inactivity, lower social class, high salt and alcohol consumption)8,10. The people living in rural areas have poor educational level, poor standard of living, lower socio-economic level, poor dietary habits and lack of access to health care facilities which place them at risk of HTN11,12. Hypertension remains highly undiagnosed and it a major cause of premature deaths12, thus, making it a necessity to carry out this study in order to determine its prevalence. Das et al11 and Singh et al12

further reported that proper management of HTN can reduce mortality and this is only possible when the individual is aware of having the condition. According to Singh et al12, people living in remote areas may not have awareness about hypertension, its’ control and treatment due to unavailability of health care facilities, lower socio-economic status, poor educational level, poor standard of living and poor dietary habits. Considering all these factors, it becomes important to determine the prevalence of undiagnosed HTN in remote area. Hence, this research was centered in determining the prevalence and risk factors of undiagnosed HTN among the adults in Gajida Town.

Aims of the Study

The following were the purpose of this study:

This study was a cross-sectional study carried out in Gajida Town.

Population of the Study

A sample size of 364 participants was recruited for the study using convenient sampling in which a house-to-house enumeration of all adults’ blood pressure was conducted.

Assuming 95% confidence level (z=1.96), prevalence of hypertension (p) of 35% and an absolute precision of 5% a total of 364 participant was calculated.

The participants were eligible if they are fulltime residents of the study area; adults aged 19 years and above.

The instruments for data collection include:

Ethical approval was sought from Hospitals Management Board, Kano. Approval to conduct this study was also got from the District Head, Gajida Ward. The procedure was fully explained to the

participants and consent of the participation was sought via completion of consent form.

The following measurements was made and recorded in the data sheet:

The participants were asked to stand anterior to the

stadiometer. Participants stood erect, with the trunk straight, the face facing forward, the arms by the side and the head straight. The calibrator was placed over the head of the participant and the reading was taken to the nearest centimeter13.

The participant was instructed to comfortably sit and place arm at heart level. The blood pressure was measured twice in the right arm with an interval

of at least ten minutes (10mins). Blood pressure was measured using a mercury sphygmomanometer12. It was ensured that the participants did not consume any caffeinated drink, did not engage in any form of physical activity, and not smoked cigarette for at least half-an-hour before assessing the BP. The average reading was recorded. Either systolic BP (SBP) or diastolic BP (DBP) of ≥140 mmHg and ≥90 mmHg respectively was used to determine hypertension14.

The following risk factors were assessed:

Occupationally stressed participant was considered at risk of developing HTN and was Coded as: 0= at no risk; 1 = at risk.

Participants that are educated were considered as less likely to developed HTN17 and were coded as: 0

An individual having a family history of HTN was considered at risk8 and was coded as: 0 = at no risk; 1= at risk.

An individual with poor dietary habits was considered at risk of HTN18. It was coded as: 0 = at no risk; 1= at risk.

An individual who is currently a smoker or have ever smoked in his lifetime was considered at risk of HTN19. It was coded as: 0 = at no risk; 1 = at risk

Data Analysis Procedure
Data was analyzed using both descriptive and interferential statistics. The descriptive statistics summarized data using mean, standard deviation and percentage. Interferential statistics of Spearman and Pearson was computed to determine relationship between BP and risk factors of HTN. Mann-Whitney-U was used to determine difference in prevalence of HTN across gender. Statistical Package for Social Sciences (SPSS) (version 16.0) was used for the analysis at significance level of P<0.05.

A total number of three hundred and sixty four (364) subjects participated in the study. Out of which 185 (50.8%) were males and 179 (49.2%) were females. The physical/anthropometric characteristics of the study participants are shown in Table 1. 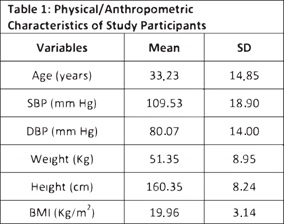 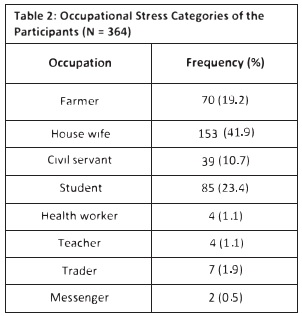 As seen from the table 3, most of the participants are not educated, only few went through school. 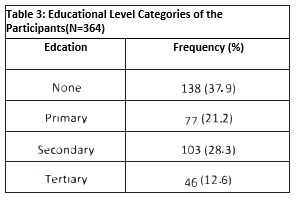 Table 4 describes some risk factors of hypertension with family history being the highest followed by dietary habits. 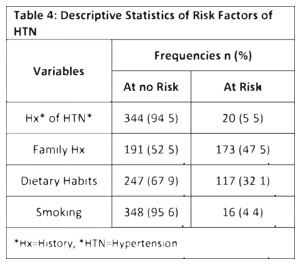 Table 5 shows that moderate number of participants were newly diagnosed as hypertensive. 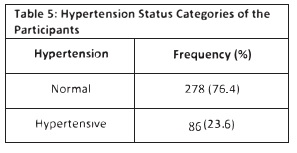 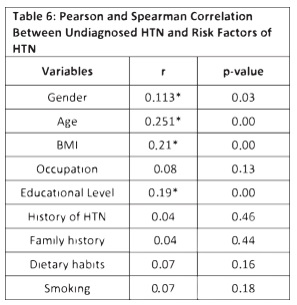 Table 7 shows summary of prevalence of undiagnosed HTN across gender. Mann Whitney U analysis shows that there is a significant difference between the male and female scores of HTN (SBP & DBP) (U= 1.497, p = 0.032). 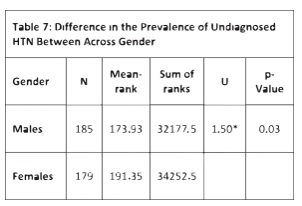 Prevalence rates of 24.9%, 32.2%, 25.2%, and 19.04% of undiagnosed hypertension were reported in rural areas of West Bengal22, Lucknow23, Tamil Nadu24 and central India25 respectively. A prevalence of 33.3% undiagnosed hypertension was reported in eastern India among the native people of Assam. In the rural areas of Jammu and Andhra Pradesh, a 13% and 27% prevalence of high BP was  recorded respectively in people of greater than 30 years. This finding is similar to reports from industrialized countries.

The prevalence of high BP increased with an increase in age in this study. This finding is similar to other studies in various parts of India. A study in north India reported highest prevalence of high BP among the 60-69 year age category. The findings are also consistent with those reported by Erem et al 26-28, Wang et al29 and Lim et al 30 from Turkey, US and Malaysia respectively.

Hypertension prevalence was different across gender in this research. This finding is similar to previousfindings 25,26,39. However, some studies1,28 havereported that hypertension has no relationship with gender.

Hypertension family history was not related to hypertension in the present study. This finding is consistent with the reports of Bharati et al1 and Yadav et al23; however, Divan et al33, Reddy et al31 and Erem et al28

reported a positive association of family history of hypertension.

In the present study, the habit of smoking was not related to hypertension. Divan et al33 and Yadav et al23 reported similar findings. Others reported no association1,8,24,25,31.

It was noted from this study that hypertension is related to BMI. This finding was also noted in previous studies23-25,28,31,32,34.

A moderate prevalence of undiagnosed hypertension was found among adults in Gajida town aged 19 years and older. Hypertension is related to age, gender, BMI, and educational level. On the other hand, occupational stress, history of HTN, dietary habits, family history, and smoking showed no relationship with hypertension.

A moderate number of adults in Gajida town are living with undiagnosed hypertension. This finding highlights the need for services to further diagnose and manage cases of undiagnosed hypertension as this condition may be asymptomatic. Routine measurement of BP makes possible early diagnosis and management of hypertension and this can further avoid any harm to health. Also, the Director, Health Services, Tofa LGA, should organize some program on health education to promote awareness, detection and management of high BP. Campaigns need to be organized at work places to educate the people on hypertension and its association with obesity and level of education. High risk female individuals who are obese, above age forty with a family history of hypertension should be encouraged to have routine BP measurements. Posters should be used to convey information on physical activities and weight loss.

A surveillance system should be set up in Gajida town for risk factors of hypertension. This will enable monitoring and determination of prevalence of undiagnosed hypertension and its risk factors. It will further be beneficial in evaluation of interventions. Also, further studies should be conducted on the factors related with poor control of BP among persons already receiving treatment of HTN, knowledge and attitude of adults in Gajida town towards obesity and physical activity. In view of the moderate prevalence of undiagnosed HTN among adults in Gajida town compared to other population, a comparison study of Gajida town and other population may determine if there are factors peculiar to Gajida town.

[11] Das OP, Vijaya AN, Ashwini B, Narasannavar RS. Prevalence of Hypertension among Adults Residing In Urban Slums of Ramnagar, Belgaum

[29] Wang Y, Wang QJ. The prevalence of pre-hypertension and hypertension among US adults according to the new joint national committee guidelines: new challenges of the old problem. Arch Intern Med. 2004;164(19):2126-2134