To analyze the impact of Facebook addiction on academic performance, self-esteem and intelligence quotient (IQ) level among the undergraduate students.

This is a cross sectional observational study, that was conducted on undergraduate students of College of Physical Therapy. 150 undergraduate PT students (males and females) of second, third, fourth and fifth years were included in this study, who have been using Facebook from 8 months or above.

Among 150 students, 83 (55.33%) participants were Facebook addicted, whereas 67 (44.67%) participants were not addicted to Facebook. The age of the students range from 18 to 25 years and the mean age of all students was 21.7 years. There was a significant association between Facebook addiction with academic performance of students according to their GPA (p-value =0.00), with IQ

Frequent use of Facebook in students makes them addicted, that affects their academic performance, IQ level and self-esteem.

The online social networking is rapidly changing the lives of human beings 1. The use of social network has turned into a focal part of the developing countries. Besides its huge benefits, it has now become a captivating issue of civil argument that whether it is helpful invention or loaded with vulnerabilities. The greater part of the users does not understand the negative effect of online networking on their lives because they are getting addicted to it2. Young people are more addicted to new technologies and to online social networking site3. The popularity of social media platforms like Facebook, Twitter, YouTube and Whatsapp continue to grow and making remarkable changes in world now a day1.Social networking is one of the best communication tools, providing people with amazing opportunities to interact with each other 4,5. The online networking has been pervading over day by day schedules in various ways.

In 2016, 88.5% population of United States (U.S.) uses internet on a regular basis6. In Pakistan, social networking is becoming the most powerful channel of providing up-to-date information even the entrance rate is comparatively low as compared to the other developed countries. In Pakistan internet use is increasing. In 2013, 10.9% population of Pakistan was using internet on a regular basis7, whereas, in 2016 it becomes 17.8%6. Now-a-days Facebook is the most popular Website of social media and it is one of the leading social networking sites8. Its active users are increasing rapidly worldwide6. As the usage of social media, particularly the Facebook is growing rapidly among students 9,10. They are using this medium of communication frequently on daily basis. Facebook is a medium of communication between individuals but unfortunately people are increasingly become a Facebook addicts. When Mark Zuckerberg started Facebook in 2004, he had no idea how big it would really get to be and within a couple of months, number of individuals joined the group11. There are more than 1.49 billion monthly active users of Facebook around the world. Approximately 10.6-11.8 million Facebook users in Pakistan have been recorded12. It has become one of the most frequently accessed website now-a-days. Facebook popularity is rising and can be attributed to its various fun components. Therefore, considerable negative impacts are frequently either ignored or need more attention, such as Facebook addiction, security issues through hacking or stalking. Facebook users are often unaware of some adverse

Now-a-days people are far away from making actual relationship through face to face contact with individuals around them. This is because they have an increased tendency to spend great number of hours on Facebook, enjoying day by day activities. This subsequently creates loneliness, diminished concentration, poor academic participation, low academic evaluation, poor academic performance, courage to bunk from classes and so on13. Academic performance is the means by that student is assessed in studies. Poor academic grades are considered as bad academic performance. The living of students has been changed dramatically over time. Now, they live a life of social media and communication technologies, mainly including Facebook and messaging 14. Today’s student sit in front of the television, write instant messaging or participate in Facebook activities, while on the other hand simultaneously doing and engage in their academic work15. They frequently post and check status on Facebook. They ‘comment’ and ‘like’, more than they talk to the person next to them. There is a nonstop diversion in their lives in light of notifications of Facebook. This continues along with a lecture in a class or during the study time of exams. In spite of the fact that it’s an era of multitasking14, however, frequent responding to the notifications can disturbs the concentration of students, that may has negative impact on academic performance. Despite this, there are numerous students who have no significant correlation of computer use with their academic performance16.

Users can get new and relevant data of their means in a more efficient manner. This may thus help to augment and enhance the learning performance of students as to other online websites and

Academic achievement or success is the prime attainable goal of any student, with their social and family responsibilities. The university students love Facebook profoundly, instead of just a leisure activity or leisure time. The University and college students are one of the real populace utilizing Facebook for entertainment mainly. This includes association with their new and old companions, sharing every day and routine activities, using latest features such as photo sharing, comments, tags, publishing wall post, and writing their status updates even during class. If Facebook is used widely and intensively for academic purpose and essential communication with others, positive impact on academic performance, self-esteem and intelligent quotient (IQ) level could be expected. On the other hand, if it is used for fun and recreational activities only (for example; playing games, tagging and posting photos, stalk people), there may be more negative impacts on one’s academic performance, self-esteem and intelligent quotient. Students possibly devote too much time to Facebook and get addicted.

There is likelihood that the much utilization of Facebook can lead the individuals to abnormal psychological behaviors, such as depression, anxiety or

narcissistic behavior20. A number of studies had been done with the aim to analyze the effects of social networking (for example, Facebook) on different aspects of students19-26. It has been also anticipated that college students with time-consuming range of social networking along with their fellow students and teachers, can be a path to obtain data, acquiring knowledge, and social acknowledgment. Hence, this can bring enthusiasm in terms of their self-esteem, realization with university life, and improved grades26,27. On the basis of some mentioned research findings, it has been suggested that Facebook has a great impact on lives of students. The Pakistani population, especially the undergraduates of Karachi, has not been

excluded from the majority that has joined Facebook and surf it every day. So this kind of study would provide an insight on the impact of Facebook on the undergraduates, especially of College of Physical Therapy. The primary objective of this study was to demonstrate the relationship between Facebook addiction and its impact on their academic performance, self-esteem and IQ level. The study will help the undergraduate students in understanding the impact of social media, especially the Facebook, on these variables.

The undergraduate students of College of Physical Therapy

Both male and female, undergraduate students of Doctor of Physical Therapy (DPT), who have been using Facebook from 8 months or above were included in this study25.

Participants diagnosed with any learning disabilities and those who do not have Facebook account were not included in the study. The students of first year DPT were also excluded from the study because at the time of data collection they were fresh newcomers and they did not have any Grade Point Average (GPA) record. Ethical Consideration Anonymity of the participants was maintained. Before the beginning of the study, the procedure was explained to the participants and each participant signed a consent form.

150 students that were meeting the inclusion criteria had been selected from College of Physical Therapy. Before the beginning of the survey, the study was explained to the participants. The data was collected through questionnaires. Questionnaires were distributed to the students and they returned them after filling.

Demographic data of the student with information about the academic performance and studying semester was also documented on questionnaire. GPA of semester exam was considered for recording the academic performance of the students. Bergen Facebook Addiction Scale was used to evaluate the Facebook addiction of students and categorized them as “Facebook Addicted” and “Facebook Not Addicted”. Intelligence Quotient (IQ) Questionnaire was used to categorize them as Extremely Low, Low, Below Average, Average, Intelligent, Superior Intelligent and Above Superior Intelligent. Rosenberg Self-Esteem Questionnaire was used to evaluate the level of self-esteem and categorized them as Low, Normal or High self-esteem.

DataAnalysis
We used SPSS (Statistical Package for the Social Science) version 20 to analyze our data. The frequency distribution, percentages, mean and standard deviation (SD) were determined for descriptive variables. Independent t-test and Pearson Chi-square test were applied to analyze the impact of Facebook addiction on different variables that include academic performance, self-esteem level, and IQ level. P-value of less than 0.05 was considered significant. Results were compared among Facebook addicted and Facebook not addicted participants.

shows that there was no significant association between gender and Facebook addiction (p-value = 0.30).

Students of semester 4, 6, 8 and 10 were included in this study. Among Facebook addicted group of 83 participants, 32.5% students belong to semester 4. It was found that there is no significant association of semesters with the Facebook addiction (p-value = 0.386). 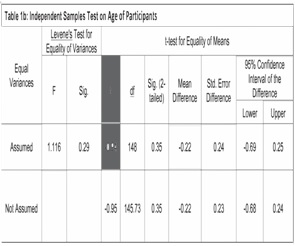 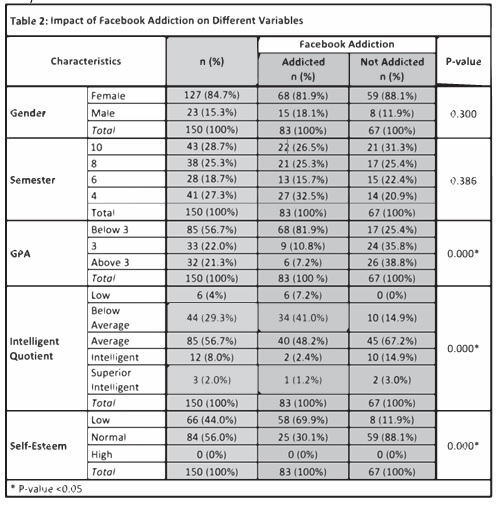 CONCLUSION
Frequent use of Facebook in students makes them addicted, that affects their academic performance, IQ level and self-esteem.

[4] Osterrieder A. The value and use of socialmedia as communication tool in the plant sciences. Plant methods. 2013;9(1):26

[5] Baruah TD. Effectiveness of Social Media as a tool of communication and its potential for technology enabled connections: A micro-level study. IJSRP. 2012;2(5):1-10

[9] Ean LC, Lee TP. Educational use of Facebook by undergraduate students in Malaysia higher education: A case study of a private university. Social Media and Technology. 2016;1(1):41