Myofascial pain syndrome is a common source of pain in people with bad postures. Mostly trigger points (TrP) of muscles become chronic and cause restricted ROM. Upper trapezius TrP are common in people of all ages especially young and middle aged adults. Physical therapy has been used to release these TrP.

30 individuals with history of neck pain were taken through non-probability purposive sampling technique. They are randomly allocated to intervention and control group. The intervention group received Myofascial release technique with stretching exercises and the control group received spray with stretch technique. The techniques were applied for three consecutive days. A pre-assessment and post-assessment of ROM and pain scores on VAS were taken.

This study shows that the ranges of cervical side flexion of both sides were increased in intervention and control groups.

Myofascial release have greater effects in releasing upper trapezius TrP with significant reduction in neck pain and improved neck movements as compared to spray and stretch technique and there would be minimal chances of early recurrence of TrP after about 3 days of receiving it.

Myofascial trigger point is a hyperirritable spot that is felt as a nodule in a taut band of skeletal muscle1. Manual pressure is used to locate the site of trigger points (TrP)1. These trigger points cause Myofascial pain syndrome and have sensory, motor and autonomic dysfunction1. Motor symptoms include decrease muscle strength with stiffness and decrease range of motion while sensory symptoms manifest as local tenderness, referred pain with central and peripheral sensitization1. Central sensitization refers to increased excitability of central neurons whereas peripheral sensitization describes the reduction in threshold and increase nociceptors responsiveness1. These sensitizations lead to allodynia and hyperalgesia1. Autonomic symptoms include altered vasoconstriction and vasodilatation, coldness, increased sweating and pilomotor response with hypersecretion2.

Poor head posture leads to hyperactivity in upper trapezius that causes trigger point formation in chronic stages4. The associated trigger points can be formed in the contralateral trapezius and ipsilateral levator scapulae, rhomboids and supraspinatus muscles4. Moreover, the satellite trigger points are more likely to develop in temporalis and occipitals muscle4. Trapezius has three parts that are parsdescendens, parstransversa, pars ascendens5. Pars descendens is the upper part of trapezius that originates from the occipital protuberance, nuchal ligament, spinous processes of 7th cervical and all thoracic vertebrae and are inserted on the lateral third of the clavicle and acromion and spine of the scapula5.The fibers of the upper part elevate the acromial end of the clavicle, extend the head and stabilize the scapula5.There are seven motor points in the trapezius muscle among which four are the motor points that are clinically associated with trigger point1(TrP1)6.Trigger point2 (TrP2) is located in the mid portion of anterior border of upper trapezius4. The involved fibers are vertical that attached to the clavicle4. The referred pain goes from the posterolateral aspect of neck to the mastoid process4. This referred pattern is associated with ‘tension headache’4. The pain is rarely referred to the lateral side of head, temple, back of orbit and jaw angle4. TrP2 is inferior and lateral to the TrP1 in the mid horizontal fibers4. The resultant pain is referred behind the ear and posterior to the zone of TrP4.

Various techniques are used to treat the trigger points such as ice massage, ice sweeps, spray and stretch, sustained deep pressure, electrical stimulation, low-power laser and ultrasound7. Application of cold alleviates the pain by decreasing nerve conduction velocity (the speed by which a nerve signal travels)8. Also it acts as a counterirritant and desensitizes the nociceptors according to pain gait theory; another effect of decrease in pain is due to the release of endorphins from the descending pathways8. Myofascial release refers to a manual massage technique that is applied to release fascia, skin, soft tissues and bone from adherence in order to relieve pain and to improve range of motion9. Fascia is a connective tissue that lines the musculoskeletal system and organs as well9.

Myofascial release encompasses different manual techniques among which sustained manual pressure technique has found to be most effective treatment for releasing trigger points10. A study hypothesized that the central nervous system is involved in the pathogenesis of trigger points11. This central mechanism explains prolonged plateau depolarization of α-motor neuron that results in continuous discharge from the neurons11.Myofascial pain syndrome is a musculoskeletal syndrome that is associated with trigger points in the muscles12. These trigger points are palpable, focal and tender12. On palpation they produce twitch response with or without referral of pain12.

Myofascial release is a manual technique that implies application of gentle manual pressure to release the fascia adhesions13. The technique is applied without any ointment into the direction of adherence13. The pressure is sustained for about 90 to 120 seconds minimally13. Myofascial release technique restores muscular function with postural alignment and promotes relaxation9. Basically, this technique releases the muscles that are hold abnormally with a tight fascia9.

Researchers supported the idea of releasing trigger points with vapocoolant sprays14. The evidences have explained that the application of cold by the spray inhibits the central nervous system responses including pain signals along with reflex motor and autonomic effects14. As the pain is alleviated the muscles become relaxed which can be then stretched and lengthened14.

This spray and stretch technique is effective, quick and least painful for the treatment of a single muscle myofascial pain15.

Vapocolant spray provides tactile stimulation in the reference zone of trigger points that blocks the reflex spasm15. Thus the pain subsides and the muscle is stretched passively15. The main purpose of this study was to see the effects of vapocoolant spray with stretching on myofascial trigger points.

30 participants who aged between 18 to 40 years were recruited in the study. A block randomization non-probability purposive sampling technique was used according to which 15 participants were allocated to intervention group and 15 to control group.

Data was collected from an OPD setting of an orthopedic clinic.

Data was collected through questionnaires and assessment forms. On the basis of questionnaire, the participants were recruited into the study. After recruitment a pre-assessment was taken including VAS score and range of motion for cervical lateral flexion. Pain was elicited by palpating the trigger points and the participants were asked to mark the pain intensity on a VAS scale. Participants who notified bilateral pain on palpation were assessed for range of motion of cervical lateral flexion on both sides that indicated bilateral involvement with trigger point formation.

Subjects were instructed to sit in a comfortable position with back straight and supported on the armless chair and feet placed on the floor. Sustained manual pressure was applied for 3 times per session. First the trigger points were palpated in the upper fibers of trapezius by thumb moving in a circular direction deeply in different points of upper trapezius, when found deep sustained pressure on the trigger points was applied with thumb and maintained for 60 seconds and then was released in vertical direction.

Therapist laterally flexed the neck followed by forward flexion on opposite side to place stretch on the involved upper fibers of trapezius muscle.

Group B: Spray and stretch

Subjects were instructed to sit in a comfortable position with back straight and support on the armless chair and feet placed on the floor. Then the therapist stretched the upper fibers of trapezius muscle for maximum lengthening with the Myofascial trigger point and pressed the patient’s head in forward direction to raise the occiput. At the same time the vapocoolant spray was applied in parallel sweeps from the acromion to the mastoid process.

A Statistical package for social sciences (SPSS 20) version has been used for the analysis of statistical data.

Individual with history of neck pain or tension headache for at least 3 months and were willing to participate in the study.

Individuals with who have one of the following conditions were excluded from the study.

This study analyzed the comparative effects between two techniques that are Myofascial release with sustained pressure and spray and stretch techniques in the treatment of Myofascial pain syndrome caused by upper trapezius trigger point. Stretching exercises of neck are incorporate with both techniques. Participants were selected on the basis of questionnaires and assessment (i.e. VAS score and range of motion of cervical side flexion). Sample of 30 participants were included in the study with mean age of 18 to 40 years. It was seen that out of 30 randomly selected patients, 21(70%) were female and 9(30%) were male. 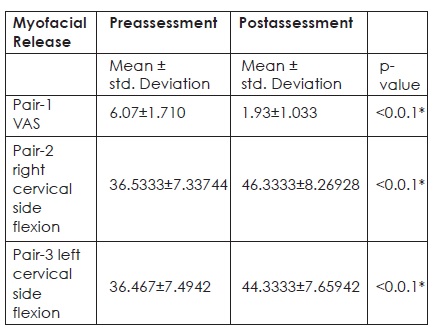 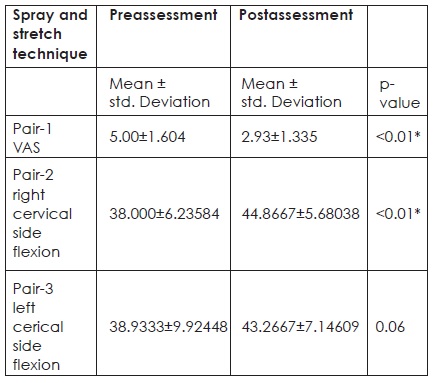 Patients were equally divided into two groups i.e. 15 patients per group. Group A was treated by myofascial release with exercises while group B was treated by spray and stretch technique with exercises. Pre and post range of motion of cervical side flexion were noted of the respective treatment given. The data was analyzed from the SPSS statistical analysis program on the basis of mean and standard deviation by using t-table.

Pain was also calculated via Visual Analogue Scale (VAS) in candidates of both groups i.e. A and B. Group A, calculated pain was 6.07 before treatment and 1.93 after treatment. While group B, pretreatment pain was 5.00 and post treatment pain becomes 2.93.

By above results, it was known that both these techniques are effective in relieving pain and restoring range of motion in participants with myofascial pain syndrome caused by upper trapezius trigger point with p-value 0.00 by applying paired sample test. In comparison, it is evident that results of myofascial release with exercises in terms of pain reduction and increase in range of motion are more significant as compared to the results of treatment with spray and stretch technique with exercises. 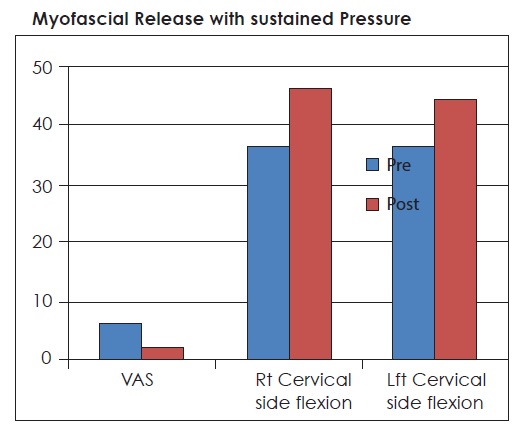 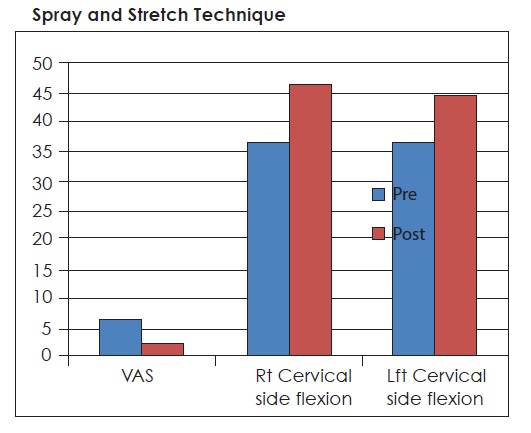 Myofascial pain syndrome is a major health issue that affects the individuals by reducing mobility with disabling pain. It therefore has impact on sense of well-being16. This syndrome comprises the painful taut bands of muscle that contain palpable, hypersensitive nodules known as myofascial trigger points16. It has been reported that individuals with trigger points not only show a reduced functional status but also suffer from mood changes and have an indirect effect on quality of life16.

Individuals who have trigger points report local persistent pain with decreased range of motion17. Mostly the trigger point formation occurs in postural muscles17. Postural muscles of the neck are the most frequently affected ones including trapezius especially17. It has been suggested that active trigger points in the upper trapezius muscle were associated with chronic tension type headache. It was also reported that individuals with active trigger points had been suffering with more severe type of tension headache as compared to those having latent trigger points18.On Histological examination of muscle biopsies from myofascial trigger points reveals that hyper contracture is formed that is associated with sustained sarcoplasmic reticulum calcium release due to intense neural activation and action potential generation16. Sustained contraction with increased metabolic stresses and reduced blood flow causes secondary changes in the muscle and leads to persistent trigger points16.

The proposed mechanism behind myofascial release with sustained pressure is basically the neuromuscular relaxation. This relaxation is achieved by the stimulation of Golgi tendon organs which alter the mechanical tension of the muscle with resultant reduction in neuromuscular sensitivity to mechanical pressure and stretch18.

Pain was also calculated via Visual Analogue Scale (VAS)23-25 in candidates of both groups i.e. A and B. Group A, calculated pain was 6.07 before treatment and 1.93 after treatment. While group B, pretreatment pain was 5.00 and post treatment pain becomes 2.93. It was acknowledged that both these techniques are effective in relieving pain and restoring range of motion in participants with myofascial pain syndrome caused by upper trapezius trigger point with p-value 0.00 by applying paired sample test.