To compare the effects of trigger point (TrP) pressure release with ultrasound therapy to reduce rhomboid pain due to TrP.

The study indicates that there is no significant difference between TrP pressure release and u/s therapy in relieving pain and improving functional performance in subject with rhomboid TrP.

Myofascial trigger point pain is a hyperirritable spot in skeletal muscle that is associated with a hypersensitive palpable nodule in a taut band 1,2. The spot is tender when pressed and can give rise to characteristic referred pain, motor dysfunction and autonomic phenomena3. It is a particularly established reason of constant pain disorder in all areas of the body. Diagnosis is made on the basis of precise palpation with 2–4 kg/cm2 pressure for 10–20 seconds on the deduced trigger point to elicit the referred pain pattern to build up4.There are two rhomboid muscles, which extend from the spine to the medial aspect of the scapula in the middle back. It is present under the Trapezius. The function of the rhomboids is to arrange the scapula throughout different movements of the shoulder and arm. EMG has shown that these muscles are highly active in Shoulder Abduction and slightly active in flexion and extension (arm swinging movement) during walking which indicates that these muscles, along with some other muscles of the shoulder joint, provide stability to the scapula. The weakness in rhomboids arises from rounded shoulders and depressed sternal posture, commonly5. Strain in rhomboid muscle or spasm in rhomboid muscle is most of the times caused by repetitive movement or overuse of the shoulder and arm in forward elevation, usually in activities such as serving a tennis ball or reaching to put objects on a high shelf, and prolong computer use6. The trigger point of rhomboid minor is present medially to the internal edge of the scapula along with the spine of scapula. The trigger points in the rhomboid major are two in number (as shown in Fig. 1) one above the other, along the medial edge and lower part of the scapula5. 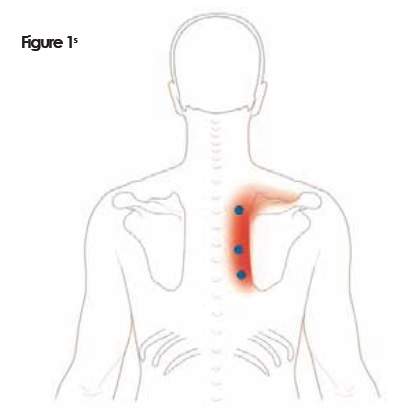 The clinical findings or symptoms may include aching; but not deep pain inside the shoulder blade, resting pain; not aggravated or relieved by movement and the pain is relieved by rubbing. Rounded shoulders, sunken chest posture, tight pectoralis, cracking or grinding sounds around the shoulder medial aspect during arm movements are all the indications of rhomboid weakness or trigger points5.

This may be possible by applying different managements and treatments. Aggravating factors that may cause prolong overuse or stressed injuries on muscles, must be reduced. Pharmacologic cure in musculoskeletal pain consists of painkillers and medications to encourage sleep and loosen up muscles. ‘Antidepressants, neuroleptics, or nonsteroidal anti-inflammatory drugs (NSAIDs)’ are usually given to such patients8.

The pressure applied to relieve a trigger point should induce a pain of not more than 5/10 on a VAS scale. The time needed to press the trigger points can be nearly 8 – 12 seconds9.

The aim of this research is to find out the effectiveness of trigger point pressure release or ultrasound therapy in the management of rhomboid trigger point pain.

A sample size of 50 patients was calculated through Open Epi with a point prevalence of 18.1% at 95% of confidence interval. Margin of error is 0.05.

50 patients who met the inclusion criteria were selected from the outpatient department of Ziauddin Hospital, Clifton campus, Karachi, Pakistan.

The total duration of the study was 6 months

Simple random sampling technique with two groups A and B, each comprising of equal number of members i.e., n=25

Patients in group A (n=25) were given 10 sessions of Trigger Point Pressure Release treatment and exercise therapy for about 20 minutes. Whereas, the patients in group B (n=25) were given exercise therapy and ultrasound therapy at 1 MHz frequency with an intensity of 1.5 W/cm2 using Grey’s formula to estimate the total time period for u/s application on each individual11-13. The ERA of the transducer was written as 5 cm sq. The total treatment time calculated was 8 minutes. Exercise therapy included supervised workout plan starting with warm ups and stretching routine for upper extremities and upper back. Abdominal toning and paravertebral strengthening were added according to patient’s condition. Both the groups received the treatments for a time period of 4 weeks.

Data analysis was done by SPSS version 20 and t-test was applied.

To avoid bias, patients were requested not to take any new pain medications or follow any other exercise regime from the start of the study till the end of it followed by follow-up.

Standardized assessments forms were made to record patient’s data. Outcome assessments were done by patient’s answering the questionnaire. An aggregate of 50 patients were randomized by simple random sampling technique and divided into 02 equivalent groups of 25 each. The number of male and female patients was 20 and 30 respectively [Mean age 37.62 years SD 7.44 (range 20-50 years)] were dispensed (Table: 1).

The results present in our study suggest that there was no significant difference in both the groups that received trigger point pressure release technique or u/s therapy in the management of rhomboids trigger points. Unfortunately, there is no published research available to identify the effects of trigger point pressure release or u/s therapy or any comparative study between the two on rhomboids. But, analogous researches to this study have been done by other researchers on different body muscles such as iliotibial band14, subscapularis muscle15, Iliopsoas16, neck and upper back muscles17, scalenei muscles18, shoulder girdle muscles19, masticatory muscles20, upper trapezius muscle21.

The findings in an article by Kaintz B. were also supportive of our research which suggested that when manual techniques were applied with some other therapeutic modality or therapy it yields better results. The systematic review also suggested that u/s with high–power or phonophoresis may prove to be better as compared to conventional u/s23.

A case series published by Mario Pribicevic et al applied manual therapy (cross-friction massage and ischaemic pressure) with phonophoresis u/s and shoulder exercises on shoulder muscles and concluded that it was beneficial for the relief of pain and return to function, in shoulder impingement syndrome which is consistent with the results of our research24.

A study conducted by Aguilera FJ et al concluded that massage therapy along with u/sin latent myofascial trigger points of trapezius revealed no significant difference between the efficacies of the treatments further supporting our results25.