The suboptimal utilization of Cardiac Rehabilitation (CR) poses a challenge to health policy makers in the prevention and management of coronary heart diseases. Therefore, there is an increased need to understand the factors affecting CR attendance, to reduce the wide gap between the proven benefits of CR and its clinically low utilization.

Total 2267 patients were included where the eligibility criterion was set according to broadened candidacy for CR programs. Patients with severe functional impairment or any co-existing debilitating morbidities in which exercise was contraindicated were excluded.

Patients who were educated and underwent CABG surgery had better attendance. Considerable efforts need to be taken to use patient-specific CR to reduce ethnic and cultural barriers.

On a global scale, cardiovascular diseases (CVD) cause 17.3 million deaths annually, a number that is expected to grow to more than 23.6 million by 2030. Each year, it is estimated that 785,000 Americans suffer from myocardial infarction (MI). The risk of recurrent MI or a fatal event within five years is about 15% in men and 22% in women (age 45-64 years) and 22% in both men and women (age ≥ 65 years)1. Therefore, it is of utmost importance to prevent this high risk secondary cardiac event among CVD patients2.

Cardiac rehabilitation (CR) as defined by World Health Organization (WHO) is the sum of activity required to provide cardiac patients the best avenue that aid in presuming their optimal functions within the society through improvements in their health behaviors and by delaying or opposing their ailment progression3.

CR is not only subjected to the improvements in the functional capacity and the psychosocial quality of life of patients, but it poses tremendous benefits in decreasing the morbidity and mortality among them4-6 Recent data have proven a dose response relationship between comprehensive, structured CR programs and reduction in mortality and recurrent MI risk among patients with percutaneous coronary intervention (PCI)7, patients with stable angina and those who underwent coronary artery bypass grafting (CABG) surgery8.

Although there is compelling research evidence regarding the diverse benefits of multifaceted CR programs, worldwide the attendance rate is dismally low. Even in developed nations like in United States (US), only 10% to 20% of greater than 2 million potential cardiac candidates attend CR6.

The huge gap between the significantly proven treatment benefits of cardiac rehabilitation and the underutilization among populations is unacceptable. There are various identified social, medical and demographic determinants that act as barriers of optimal CR referral and attendance in the developed nations. These include older age, gender, lack of physician referral, perceived unsuitability, and lack of knowledge about CR benefits, low self-efficacy, lack or limited support from the family, low socio-economic status (SES), poor job timings and co-morbidities9,10. In our region, limited data exist that shed light on the possible barriers of optimal participation at CR programs. The data suggest patient unwillingness, unavailability of CR programs; low SES and lack of health insurance are the most common limitations11. The American Heart Association (AHA) focused on the immense need of appropriate patient referral for cardiac rehabilitation and understanding of their social and medical profiles to get maximum utilization and retention of CR programs3. CR is now considered as an essential element of the standard cardiac treatment12. CR is not just a traditional physical therapy program, but it is a multifaceted approach to provide optimal benefits on physical and psychosocial functions of cardiac patients. The components of CR are structured to slow or reverse disease progression, promotion of healthy lifestyle and stress regulation13. In recent years considering the proven efficacy of CR programs, the eligibility criterion for enrollment in comprehensive CR sessions has been broadened. Now the scope includes all forms of CVD, patients who underwent PCI or CABG surgery, heart transplantation and stable congestive heart failure (CHF) patients and those with peripheral artery disease (PAD) with claudication6.

Benefits of cardiac rehabilitation are well documented in the present literature. Various studies have proven the efficacy of these programs in terms of reductions in morbidity and mortality. Results of a meta-analysis showed significant reductions in cardiac related mortality and all-cause mortality among patients who attended CR14. In another meta-analysis, significant association was found between exercise-based CR and reductions in the recurrent events of MI, cardiac and all-cause mortality15. Moreover, recent meta-analysis presented the benefits of CR in 17% reduction in recurrent MI event at 12 months and 47% reduction in mortality at 24 months16. The American Heart Association (AHA) and the American College of Cardiology Foundation (ACCF) refer CR as Class I–level recommendation for the prevention and management of coronary heart disease (CHD)17. It is surprising that instead of proven benefits of CR, the enrollment status is relatively very poor. Among potential candidates, 14%-35% of MI survivors and 31% of patients’ undergone CABG surgery attend CR18,19. There are several identified patient and system related factors associated with poor attendance at CR20. Lack of physician referral, poor system for reinforcement, co-morbidities, personal unsuitability, lack of motivation, female gender, low SES, long distance from residence, transportation, limited family and social support, low level of education, and low self-efficacy are some of the consistent factors found to be associated with poor enrollment at CR in developed nation21.This sub-optimal utilization of CR continues to inflict challenges to health policy makers working for prevention and management of coronary artery diseases (CAD). Sufficient data related to factors affecting attendance rates in local settings are not present. Therefore, there is an increased need to understand these factors in our local scenario in order to reduce wide intervention gap between the proven benefits of CR and its clinically low utilization. The aim of the present study was to determine attendance rate and the factors affecting outpatient cardiac rehabilitation enrollment.

A cross-sectional study was conducted at Tabba Heart Institute (THI) to investigate factors affecting CR enrollment after cardiac procedures specifically myocardial infarction, percutaneous coronary intervention and cardiac surgery. THI is a specialty cardiac care hospital located in a populous area in Karachi that caters patients from different socioeconomic backgrounds. Moreover, this state-ofthe- art cardiac hospital is the only set up in the city that offers supervised cardiac rehabilitation program. The Preventive Cardiology and Cardiac Rehabilitation Department at THI provides tailored CR program including monitored and supervised exercises, patient and family education and individual diet consultation. CR team designed by keeping in view a multi-disciplinary approach which included dietitian, trained CR Physiotherapists, cardiac nurses, diabetes educator and other allied health professionals, working in close coordination with cardiologists/cardiac surgeons. Purposive sampling method was used and 2267 eligible patients admitted from July 2014 to April 2015 were enrolled. The eligibility criterion was set according to the broadened candidacy for CR programs. Detailed information about the structure of CR was given to all eligible patients before discharge and the potential candidates were referred for CR within 2-3 days after percutaneous coronary intervention (PCI) procedure and 5-6 days after cardiac surgery, while in other countries CR is offered after few weeks from discharge. Clinical and socio-demographic information were obtained.

The mean age (± SD) of patients was 57.43 (± 12.2) years and 75.7% were males. Out of 2267 patients, only 221 patients (10%) enrolled and attended CR and among 221 attendees, 188 patients (83.2%) completed more than 6 weeks of outpatient hospital- based CR program. Significant association was found between CR attendance and patient medical diagnosis and procedure (P<0.01), ethnicity (P<0.05) and educational level (P<0.01). Conversely, no association was found between CR attendance and patient gender, age and employment status. Among non-attendees, 58.6% had undergone percutaneous coronary intervention (PCI) and 16.2% had no formal education about CR. Moreover, 49.6% patients who attended CR had undergone cardiac surgery.

The study conducted with the aim of determining factors affecting outpatient cardiac rehabilitation enrollment and attendance revealed numerous factors that can be addressed in order to improve CR attendance rate. Our study reported enrollment rate of 10 % of the referred group of patients which strongly supports findings from previous studies that concluded that CR services are underutilized19,22,23 The present studies presented no association between CR attendance and patient gender and age which seconds results found in a study done in our local scenario11. Although the enrollment percentage of patients older than 49 years of age was greater as compared to their younger counter parts but the difference was not significant enough to draw a conclusion. Patient medical diagnosis and procedure (P < 0.01) was found to be a significant determinant of CR enrollment which adds strength to the conclusions drawn in previous research19,24,25. Patients gone through CABG surgery had the maximum rate of participation (49.6%) while those gone through PCI were in the highest percentage among non-attendees (58.6%). In accordance to a previous study, significant association was found between CR attendance and ethnicity (P < 0.05) and educational level (P < 0.01)26. Our study has highlighted underutilization and major barriers related to CR among patient’s undergone cardiac procedures in a local scenario. These findings can further be used to overcome barriers faced by patients.

Although CR information was provided to all eligible patients before discharge, only a fraction availed CR services. Low level of education might contribute to impaired apprehension about CR benefits. Patients who underwent PCI are more likely to consider their medical condition as less severe and return to their jobs early as they do not find any limitation in performing routine tasks. Therefore, education about the efficacy of CR on clinical stability, improved health and subsequently superior quality of life should be provided

The authors would like to thank Tabba Heart Institute, Karachi for permitting to conduct this study in their setting including patients who gave of their time to this study. 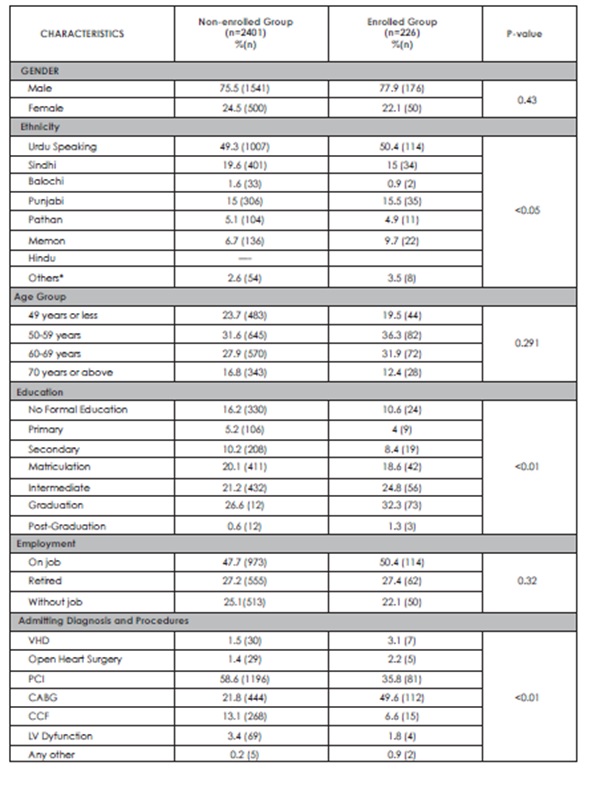