The purpose of the case study was to identify the importance of Exercise Consultation (EC) based on Transtheoretical Model (TTM) and Relapse Prevention Model. A 58 years old woman in the precontemplation phase is found to be inactive and is not willing to change the high risk behavior. On evaluation the functional status and a shuttle walk test (SWT) was performed where the level 4 out of 12 was attained initially with a peak heart rate of 130. The target was to incorporate TTM on patient in order to motivate her to proceed activities in her daily routine and move towards the action / maintenance stage. The process of changing was divided into experiential (thinking) and behavioral (doing) for the patient in order to motivate her to do physical activity. Furthermore, counter-conditioning, helping relationships and self-liberation was utilized to improve the activity. Smarter goals were set up by dividing into weekly (short term), 2 monthly (intermediate) term and 4 monthly (longer) basis. Exercise adherence has found to be significantly affected by age, gender, physical as well as psychosocial well-being. Behavioral change model was found to be beneficial for the patient in cardiac rehabilitation phase 3. More significant results may be accomplished by incorporating TTM on larger scales.

With advent of exercise based practice cardiac rehabilitation (CR) has promoted the recovery, enabling the patients to maintain and achieve better health whereby reducing the risk of heart diseases 1,2. However, the evidence has been provided that CR has prevented the secondary risk factors when a special consideration was laid on the psychosocial aspects3. At present the main focus has been laid upon the cardiac phase III, known as a transition phase between the hospital and the community, where the first half may be taken in the hospital and the second half in the community. Moreover, individualized exercise programs taught during phase 3 lays a positive impact on the physical and the psychological measures4. However, the emphasis is laid especially on modifying the risk factors and increasing the exercise tolerance on the patients with a low baseline exercise function 5,6.

Therefore, different models for the behavior change were presented in order to understand the exercise behavior as well as providing a framework to develop effective interventions to promote the physical activity on regular basis in phase 3 and 4 CR7. However, with the increasing magnitude of risk factors and a poor adherence to the cardiac rehabilitation programs a dynamic approach to the better understanding of different stages of behavior have been used recently8. However, Transtheoretical Model (TTM) effectively used to provide the basis of activity intervention used in the cardiac rehabilitation to adhere the patient to long term physical activity7. Therefore, a better understanding of exercise adherence based on TTM may be achieved through a case study given below.

A 59-year-old married woman identified with the acute coronary syndrome (ACS) after the first episode of acute chest pain. The patient presented with a past medical and family history of previous chest pain and a raised cholesterol level to (6.5mmol/l) was invited to participate in the phase III CR at the hospital. At present the patient is healthy and on statin and aspirin. She is also taking paracetamol for headaches and joint aches. No history of physical activity is presented by the patient in the school life as well as at present, although a facility of gym is provided by the partner.

A physical therapist evaluated the functional status and a shuttle walk test (SWT)9 was performed where the level 4 out of 12 was achieved initially. The patient while performing the test had to stop due to breathlessness with a peak heart rate of 130. The life style of the patient is stressful where less relaxation time is present, as always been preoccupied with work and family, but still enjoying reading and watching television. Therefore, the physical therapist designed a cardiac rehabilitation exercise program to encourage the patient to achieve the optimal physical activity and psychological well-being in the community2. However, in order to tailor the patient into the significant exercise prescription and supervision, risk factors were stratified according to the guidelines in AACVPR10 into mild, moderate and high risk (Table 1) However, as the risk stratification was done, the patient was found to be on moderate to high risk

Table 1: Risk stratification according to AACVPR, 2004

while considering the age and gender as significant. Evidence reveals that the patient presented with poor compliance to physical activity as well as increased depression affecting the QOL10.

While taking the history, past smoking, as well as decreased functional capacity was considered while setting the objectives in phase III, to deliver safe and effective exercise as well as preparing the patient to sustain activity for a longer period as living in the community11.

While considering the long term planning, moderate intensity exercise was proposed to be incorporated into daily life activities in order to encourage the patient for the long term exercise after the completion of the supervised program in the phase 32. But the evidence has presented that the patients may not adhere to the long term exercise due to which the benefits of phase III are lost while performing the phase 413, similar was the case with the patient, as she was not interested in performing the regular physical activity of moderate intensity on 5 days per week for 30 minutes14 as recommended as may be able to sustain for longer term7. However, previous evidence had shown that adherence to the physical activity during the CR has been extremely poor especially at the end of the phase 37 still EC has shown to improve the sedentary life style while comparing with the normal exercise protocol15.

According to the TTM stage of change criteria the patient was placed in the pre-contemplation stage due to the inactivity and unwillingness to change the high risk behavior in the foreseeable future16. Hence the patient was in the ‘negative’ frame of mind. Since the TTM is hypothesized into three different components such as the process of changing, decisional balance and self-efficacy to allow the movement from pre-contemplation stage to the maintenance stage17. The process of changing was divided into experiential (thinking) and behavioral (doing) for the patient in order to motivate the patient to do the physical activity15. However, the adherence has different psychological beliefs regarding benefits and barriers to exercise, having different levels of confidence in their ability to overcome barriers to exercise, and use different processes of change. (Table 2)

However, the phase from the preparation was a critical one where the patient was not only thinking about the changes but also implementing small activities that may not be enough to meet the guidelines15. However different strategies given in the table 3 were implemented:

However, the process of change for the exercise behavior revealed a significant stage of change in the more active rather than the sedentary category18 which was actually the case and the patient entered into the action stage, where life style changes were made regularly and the patient remained active for six months. However, the physical therapist was worried as the study suggests action to be an unstable stage with a high risk of relapsing into the preparation stage15. However, the strategies implemented considered reinforcing the benefits of new behavior, rewarding success along with the support and goal setting such as:

Moreover, other strategy that was utilized to enhance the behavioral change was to weigh up the advantage and the disadvantages to the patient. However, such a strategy known as the decisional balance that is the core of TTM. However, losing weight, increasing well-being, social aspects of activity, feeling fitter and removing stress were considered as pros where as bad weather and less time to be spending with the family as some of cons. However, a barrier to be faced during the pre-contemplation stage was the unawareness of the risk behavior or the subjectively reduced vulnerability due to the incorrect optimistic mindset15. Therefore, the patient was prepared to have the knowledge of the risk that could be faced in order to reach the contemplation stage15. However, the main focus was laid in preventing the relapse of the patient in the previous stage where lack in time, stressful work, family (mortgage) problems may be rescheduled with a few coping strategies: 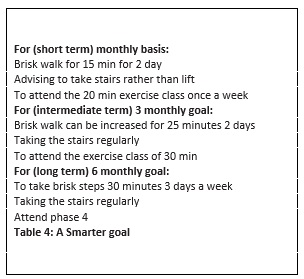 The aim of consultation for the individual during the action or maintenance stages was to ensure regularity and physical activity in phase 4 and prevent relapse7. However, the patient at the action and maintenance stages develop the self-learning and self-motivation strategies10. Since the patient loves to read and watch TV so, various strategies like supplemental audio-tapes, books, health magazines, computer programs and websites may be helpful in encouraging the independence10. Although onsite all the strategies may not be provided as well as depending directly on the participation time given by the patient10. However, emails and telephone were planned for attaining the updates about the patient at weekly and monthly intervals but the security of the communication mode is still questionable.

Moreover, the psychosocial well-being may be a considered as challenge for the patient and family members face the adaptive challenges due to long term cardiac diseases10. As the patient is preoccupied with work and the mortgage, stress was considered as a major risk factor, hence the family support may be correlated directly to the physical activity. However, it has been beneficial in reducing the stress. However, a Meta-analysis has already revealed that exercise training has significant small to moderate effects on stress and anxiety. However, the aerobic training showed greater effect than the non-aerobic exercises; more over the length of the exercise has a direct impact on the effects as well. However, a recommendation of 30 minutes of regular exercise on at least 5 days every week were broken into 3 bouts of 10 min exercise daily providing the significant results as well. Since the patient has the facility of gym hence aerobic training was conducted to provide the significant results. Additionally, the social support provided by the family may motivate the patient to continue exercise in the CR7. The most important support could be provided by partner, as regular exercise at gym has been performed by him. Therefore, partner shall:

Therefore, exercise adherence has found to be significantly affected by age, gender, physical as well as psychosocial well-being. While setting goals for a cardiac rehabilitation especially for patients with moderate to high risk factors behavioral change model was better to be incorporated into the cardiac rehabilitation phase 3. However, moderate intensity exercises were found to be significant to adhere to exercise.

[18] Hellman EA. Use of the stages of change in exercise adherence model among older adults with a cardiac diagnosis. J Cardio Rehabil. 1997;17:145-155