A cross sectional study was conducted during January 2013 to April 2013.

Research data was collected from different schools of Karachi. One hundred and thirty-two participants including both schools going students and teachers were participated in this study. The students belonged to 9–16-year age group.

Chi square test was applied to check the association between occupation and lecture attending question. Chi-square test results (p value = 0.000) showed that, there was a significant association between the occupation and attended lectures regarding postural awareness. Results also revealed that teachers and students were equally aware of standing and lying position, whereas for sitting position teachers were more aware than the students.

Study showed significant association of awareness between students and teachers. However, more education and further awareness regarding good body posture is needed to perform activities of daily living (ADLs) and to prevent prevalence of body pain due to poor posture.

Posture is the position in which we hold our body upright against gravity while standing and sitting. Due to extra muscular stress during work posture may lead to bad due to muscular misalignments to adjust the work load on it. Repetitive and forceful activities cause bad postural changes, people who do repetitive work in their workplaces with their bodies in fixed and static positions are even more susceptible to getting postural problems1.

In other words, the way a person sits or stands are called a posture2. It can also be defined as, when all the body segments observed at a specific moment3. Posture can be classified as good and bad posture. Good posture is observed when the body is kept in balance with minimum expenditure of energy while bad posture consists of poor alignment between body segments. Good or bad posture during sleep, arousal, vegetative and minimally conscious state, also has an impact on body alignment4.

Good posture is usually considered as composition of straight back, backward shoulder and flat tummy. Whereas, daily life it is impossible to maintain a perfect body alignment4. A good posture involves training of body to stand, walk, sit and lay position. Proper posture keeps bones and joints in the correct alignment, so that muscles keep on working properly. It also prevents the spine from becoming stooped forward or backward and muscular pain. No single sitting position can be called an ideal position. Sitting posture must be changed with respect to their surroundings5-7 for comfort and ease.

Posture indicates physical health status of a person. Poor spinal alignment can be attributed to muscle imbalance caused by many factors; heavy backpacks of children, prolonged sitting in front of television or video games, spinal changes related to pregnancy, injuries, and unhealthy work habits at the computer. These factors lead to negative compensatory changes in the spine8. Both students and teachers working on computer or in class rooms have greater chances of adopting bad posture. With the increased use of computer among children and adults, it may lead to musculoskeletal discomfort and pain in a larger population. Starker found in his study that 60% of students reported discomfort with the use of note book computers9.

When line of gravity passes away from the mid line, it causes body segments coming close to each other by exerting undue pressure over ligaments muscle, tendons and the attained posture is called bad posture10.

Neck posture is usually compromised with awkward position especially when using computer11. Due to bad posture during reading, or working on computer; or because of an accident; or for any other reasons the posture of a person changes such that, head is tilted forward from neutral position. This condition is called Forward Head Posture (FHP) 12. Due to altered position of head, some extra pressure is exerted on spine thus flattens the normal curve of the cervical spine resulting in abnormal strain of muscles, ligaments, bones and joints of the neck, shoulder and thoracic region. This causes the joints to deteriorate faster than normal resulting in degenerative joint disease. Posture maintained the balance of the body during standing and walking13.

FHP is one of the most common postural alterations in patient with neck diseases14. The shape of the spine is an important factor in the clinical assessment of various spinal disorders.

It is suggested that, the physical set-up and individual styles of using interactive media have influenced over such discomforts15. Posture not only affects the body but also influences our activities of daily livings (ADLs).

Musculoskeletal disorders (MSDs) of adults, such as of neck, shoulder and low back pain, have been widely reported as the major health and economic concern in developing countries16. Some MSDs are congenital but more are acquired, and these are mainly due to lack of postural awareness17.

Bad posture is observed when a person holds one position for a long time; feels unbalanced and puts undue effort to stay upright. In a working environment, a person often sits with poor posture with trunk, back and neck flexed or rotated for longer periods of time.

Literature review has revealed that aforementioned disorders are also prevalent amongst school students. Posture of the students in class room environment has been considered as a risk factor for spinal MSDs3. The use of computer by adults also affects their posture. Hence not only the adults who have increased their daily use of computer over the years, thought children have also started spending more time on emailing, playing video games, and doing word processing18. Besides computer, students also use laptops for prolonged periods in poor sitting position which causes neck and back pain19. Teachers also suffer from bad posture during computer work and while sitting in the class room.

Studies have shown that there is strong correlation among increased computer usage, improper posture on computer and musculoskeletal pain (back, neck and shoulder pain) in children aged 7-17 year20. The back, neck and shoulder pain due to bad posture alignment during childhood is found to be a predictor of the same in adulthood (Williams)21. This requires that the risk factor due to bad posture during classroom environment and daily activities should be addressed at younger age in order to prevent musculoskeletal injuries in adulthood.

This is a cross-sectional study conducted on teachers and school going students of different schools in Karachi.

The data was collected from teachers and school going students of low and high privileged schools, located in Karachi.

The whole study was completed within a period of 4 months that is from January 2013 to April 2013.

The total number of students (both girls and boys) and teachers (both males and females) that were consulted in this study were one hundred and twelve (112) and twenty (20), respectively.

The data collection tool was self-administered close ended questionnaire. The variables included in this questionnaire were:

(1) Awareness regarding correct posture during activities of daily living in standing, sitting and lying positions.

(2) Presence of pain and the areas affected by pain. Questionnaire was filled by both teachers and students.

The questionnaire had a simple, tick- box format. Individual teachers and students age group of 9-16 years were approached, who agreed to participate in the survey. Study objectives were described, after which each teacher and student was given a participant information statement and questionnaire. Informed consent was signed and returned of the questionnaire before the completion.

Data was analyzed by using SPSS version 20 and result is expressed in percentages.

This survey on posture awareness has been conducted on school going students and teachers of Karachi. A total of one hundred and thirty-two participants were included in this study. Among them 112 was school going students of age between 9 to 16 years and 20 were school teachers. Demographic information of respondents is shown in table 1.

Table 2 shows the number of students and teachers who used transport to reach school. Data shows that more than 50% of the participants reached school by walking; indicating a daily good physical activity, but due to carrying heavy bag-packs for longer period of time, it may cause shoulder pain and may also protrude head and shoulder forward with respect to body alignment. 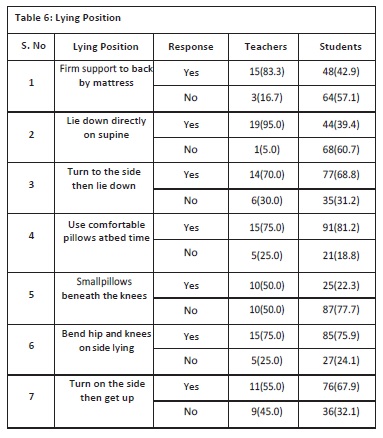 This study was designed in order to ascertain the awareness of good and bad posture amongst students and school teachers and to raise the awareness of proper posture so as to prevent many deformities and painful conditions such as Low Back Pain (LBP) and Spinal changes.

The survey revealed that, most of the teachers and students experienced back pain when carried heavy weights. After further analysis, results showed that back pain may develop due to frequent use of high heels and stooping posture while performing ADLs. A cross-sectional study done by Ismail S A in Malaysia among 2nd and 5th grade students aged between 8 to 11 years to investigate the risk factors associated with MSD. Significantly, more musculoskeletal pain was observed in children who spent more time in playing video games, watching TV, using computers and lifting heavy bags11.

The study further showed that high prevalence of low back pain among school students and teachers was due to short and prolong sitting position. Several other studies had also found association between musculoskeletal pains of lower back with sitting position22-24. Troussier et al (1994) also stated in their study that 41.6% of the respondents dents experienced pain while sitting in the class room25. In another study, Balague et al (1998) found that 42% of participants experienced pain when sitting and 28% when bending forward23.

This study also revealed that heavy bag packs of students also caused musculoskeletal pain and poor postural alignment of shoulders with respect to whole body posture. Heavy bags of school going students may cause upper extremity to move forward and downward and this may result in rounded shoulders. The position may result in shoulder impingement syndrome. Karen Jacobs also stated that adoption of poor posture by children led to musculoskeletal pain. Joint hypo-mobility and decreased flexibility can also elicit a poor posture. Jacobs further stated that, students using computers are directly associated with the development of musculoskeletal discomfort or pain throughout their middle school age18,26.

One of the major limitations of this study is that the sample size is small. This survey should be done on larger group for validation of the results presented in this study. This study should be considered as preliminary examination of awareness about posture in school going students and teachers. The obtained results suggest that there is a need to conduct postural awareness workshops at school level to educate both students and teachers about good standing, sitting and lying positions.

The postural behavior of school children and teachers affect MSD prevalence in standing, sitting and lying positions. The study findings also indicated that in some aspects the subjects did not have enough information about proper standing, sitting and lying positions. Environmental determinants are external factors that may contribute to a poor posture and musculoskeletal discomfort, like children with different body sizes and inappropriate work station set-ups could develop pain. Thus, physical factors seem to play an important role in developing the MSD. School furniture may contribute to the onset of discomfort or pain.

Moreover, further research is required to examine the association between standing, sitting and lying position and pain reported at different spinal or body locations. It was concluded that education is an effective method to increase knowledge of posture in both school going students and their teachers. More research is required to understand the linkage between posture understanding and durable accommodations.