In present world lymphedema is one of the side effects of mastectomy. When we talk about the treatment of lymphedema the standard treatment which comes into our mind is, complex decongestive physiotherapy (CDP). This treatment includes MLD (manual lymphatic drainage), short stretch bandaging, exercises program and also care of skin of the pectoral region and the surroundings as well as pneumatic compression (intermittent). Patient came with unilateral stage l lymphedema with a history of mastectomy. To treat the patient, we used MLD, intermittent pneumatic compression and exercises. In the treatment of lymphedema manual lymphatic drainage is performed (MLD). The purpose of performing MLD was to find out the effectiveness in treating breast cancer related lymphedema and also prevent fluid formation in subcutaneous tissues.

We gave the 12-session of manual lymphatic drainage and exercise in every month.

Showing that therapy created has an excellent effect. The lymphedema reduced day by day and It could also be the options to do isometric exercise program instead of performing short stretch bandaging. It is also considered as another option to treat individuals who are contraindicated for pressure therapy. When treating breast cancer you may come across the arm lymphedema. Quality of life may get affected and may also impact long term recovery and survivorship. Early treatment and preventions always plays a significant role in minimizing the complications.

The lymphatic system consists of lots of vessels that hold lymph liquid throughout the system. Lymph is often apparent, without color liquid which has water and a few bloodstream cellular materials. That starts in lots of parts as well as tissues. The lymphatic system is actually section of your defense mechanisms. It assists to protect and maintain the particular substance of your respective entire body by remove the waste products away from all body region and filtering and draining lymph. Clear, thin fluid that circulates throughout the body for elimination of wastes, bacteria and other substance from tissues, it called lymph. Edema could be the accumulation connected with excessive water so lymphedema arises while an excessive amount of lymph collects in a part of the body.

When lymphedema grows inside individuals who’ve been handled regarding breast cancer, it generally takes place from arm and hand however often that impacts the particular breast, underarm, breasts, trunk, and/or back. Every time the normal drainage pattern within the lymph nodes is interrupted or even damaged (as frequently occurs while in surgical procedure to clear out the actual lymph nodes.); serious swelling in the supply might be occurring. Rays could also destruction lymph nodes as well as lead to inflammation/swelling of the arm. This kind of bloating, due to a great irregular assortment of excessive water/fluid, is called lymphedema. The actual irritation might be noticed in the arm, chest muscles, in addition to breast area quietly connected with medical procedures (surgery).

For the rest of her life Woman is usually on greater risk connected with lymphedema if lymph node has been removed under the arm. Lymphedema can occur instantly after surgical procedure, as well as month or perhaps a long time. Not necessary every woman will experience lymphedema after a mastectomy. There are lots of kinds regarding lymphedema. Current acute, chronic, in addition to type l associated with lymphedema present inside within some days immediately after surgical procedure and also usually lasts the little phase connected with time. One mild and also extra sore stage regarding lymphedema will probably present between the 4 to 6 weeks after the surgical procedure. However, ones almost all frequent stage of lymphedema is actually sluggish along with painless as well as it will occur 18 to be able to 24 months or even additional following surgery. Lymphedema is a side effect after the breast surgery. After the surgical procedure and radiotherapy lymphedema will probably appear in a few people within months or may be a long time after treatment.

In women, this can be almost all prevalent for the arms and hand following mastectomy along with dissection of lymph node, in the arm taking place to the affected area where the surgical procedure is essentially performed. In western countries secondary lymphedema is most common as compare to other due to melanoma management. Due to axillary lymph node dissection and/or radiation therapy, patients suffer from lymphedema between 38 to 89% of breast cancer patients. Up to 41% unilateral lymphedema occurs in patients after the history of gynecologic cancer. with regard to men, incidence associated with lymphedema has become reported 5-66% inside patients take care of within frequency depending upon whether radical/ staging of lymph glands were done in addition to radical therapy.

The rate of breast cancer–related lymphedema differs enormously in the research going from 2% to 83%, depending on the measurement tool used.1-5. In 2008 Hayes et al2 research that, compared with bio impedance spectroscopy, circumferential or self-report apparatuses went undetected in 40% to 60% of patients who measured. Further, a false conclusion of lymphedema was given to 12% of those analyzed utilizing circumferential instruments and 40% of those utilizing self-report instruments. Different articles reported frequency rates of 33% to 48% after axillary lymph hub analyzation and radiation treatment (RT) and 5% to 14% after sentinel hub biopsy and RT)2,3. In a Canadian study, they reported rate was pretty nearly 12%. As a rule, the predominance of reported lymphedema ranges from 0.6% to 54%.4,5 Auxiliary lymphedema was more common in patients who had radical mastectomy (20%) than in the individuals who had bosom saving surgery (8%).6Furthermore, higher prevalence reported about 27% patients who had a history of axillary lymph node dissection as compare to those who had sentinel lymph node biopsy that is 3%.7 This article support and provides a review of the recent researches on the treatment of breast cancer related lymphedema. The family physicians have a fundamental role as front-line health care providers, in educating patients about the risk of lymphedema who had history of breast cancer’s surgery; in that way that reduces the incidence and severity of chronic condition.

A 63-year-old female, known case of ovarian carcinoma and Swelling of right breast. Complete examination was done including ultra sound, CT scan, mammogram and MRI, all examinations revealed chronic inflammation in right breast. Later her biopsy was done that showed HER-2/neu (C-erb-B2) Oncoprotein 2+ that is complete membrane staining which is non-uniform or weak but with obvious circumferential distribution in at least 10% of cells, or intense complete membrane staining in 30% or less of tumor cells. Gross description of the biopsy stated that it consists of multiple white to brown linear tissue cores ranging in size from 0.4 to 1.3cm. Section of biopsy of the right breast also showed multiple cores of breast tissue focally presenting a neoplasm with prominent crush artifacts; diagnosis features are consistent with infiltrating ductal carcinoma of the breast. Reliable grading is not possible due to crush artifacts.

She had past medical history of ovarian carcinoma later diagnosed with right breast cancer in May 2013. She refused to take surgical intervention and received alternate chemotherapy from June 2013 – Nov 2013. During the chemotherapy sessions she lost 2kg weight approximately. After chemotherapy, a CT scan was repeated which was compared to the previous examinations, it was seen that there is improvement in the disease with significant reduction in the size of the right breast lesion as well as right axillary lymphadenopathy. Right axillary lymph nodes also significantly decreased from 2.0 x 1.4cm to 1.0 x 0.7cm. The other subcutaneous soft tissue nodules in the right breast have also resolved.

In Nov. 2013, she was admitted at a tertiary care hospital for right Modified Radical Mastectomy. Pre-operative diagnosis was right intra ductal carcinoma, Estrogen receptor (ER) + ve , progesterone receptor (PR) -ve, Her 2neu +ve and Fluorescence in situ hybridization (FISH) – ve . The operative findings revealed extensively fibrosed axilla causing difficulty in dissection, Axillary vein checked for flow via inter Doppler. During the same month, mastectomy was done after which she developed lymphedema on her right arm. She had 13 sessions of radio therapy after mastectomy after which she started treatment for lymphedema in Dec 2013.

She visited different tertiary care hospitals in Pakistan as well as Dubai for the management of lymphedema and took multiple sessions of manual lymphatic drainage since the past 1 year. In 2014 she came in outpatient department; with complain of right arm edema since for month as compared to the left arm that decreased her daily living activities. 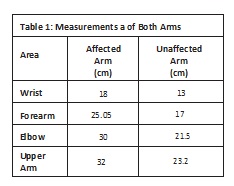 Physical examination showing stage I lymphedema in the right forearm, arm, hand and axillary. Complex decongestive physiotherapy (CDP) is termed as current standard treatment to cure lymphedema. This treatment is a combination of manual lymphatic drainage (MLD), compression therapy, exercise therapy, and care of skin8. To decongest lymphedenomatous tissues of the body patient is daily given the course of intensive CPD. After each treatment session there is requirement of multiple layers of short stretch bandaging, as we know that fluid re-accumulation is always a chance. Multiple layers of short stretch bandaging is also found helpful in creating counter force to muscle contraction. This may assist to promote normal lymph flow9,10,11. While we were treating our patient, we arranged 3 therapy sessions for her every week to coordinate with her schedule. 12 sessions were given every month. Each sessions MLD was for 45 min, intermittent with pneumatic pressure and isometric exercises were also the part of treatment from the right axillary area all the way up to right wrist, Remedial exercise to facilitate venous and lymphatic flow, and instructions for skin and nail care. (Table: 2).

Throughout the study measurement of lymphedema is required. for this purpose, we used circumferential measurement method, which is supported by Twari et al (2008) Taylor et al (2006). In the literature there was not mentioned any other effective method to measure edema. This is affecting head, neck, breast, trunk and genital region. There are fluctuations observed in the reporting of lymphedema incidence and prevalence. The inconsistencies in the measurement might be the reason and this may also affect clinical practice12 13.

Through the studies it is proved that exercise and benzopyrones which is a drug to reduces fluid formation in subcutaneous tissues, reduces pain and discomfort combined with CPT can play a significant role. It is found to be highly effective during the course of treatment of an individual, also beneficial after the treatment for further reduction in complications. Post mastectomy lymphedema is a known complication, to overcome this and many other complications it is better for patients to receive treatments earlier. It shows that in patients who received earlier treatment are towards better prognosis, improved quality of life.