The results shows that 70% physiotherapist somewhat satisfied with their general working conditions. When assessed the barriers face during the job with respect to gender it was observed that neutral responses were reported.

In recent years, physiotherapists have been increasingly interested in defining their professional identity. At the heart of this interest lies a fundamental question about the role of Physiotherapist in the field of Medicine and their standing as physiotherapy professionals. Physical medicine or physical therapy has very ancient origins. For thousands of years, people with illnesses and disabilities were treated with various methods, making use of movements (with or without the aid of mechanical devices) as well as air, water, heat and cold, electricity, and light. Despite its long history, however, astonishingly little historical research has been done on this special branch of medicine1.

Elements of physiotherapy practice can be traced to ancient China, Greece, and Rome, with significant developments occurring in Sweden and the Netherlands in the nineteenth century. Australian physiotherapy has its origins in the United Kingdom (UK) where, in 1894, an Association was formed by members of its precursor discipline—massage therapy. The growth of the profession in all other countries has very strong historical and migratory links to the UK2. The roots of the physical therapist education reach back through the ages. The profession of physical therapy may have begun as early as 3,000 BC, with evidence that the Chinese practiced massage. The development of physical therapy as an autonomous profession based on current scientific knowledge was in large part due to Per Henrik Ling of Sweden. Thereafter, physiotherapy education evolved in different ways around the world. In the UK, it was through the Society of Trained Masseuses. In Norway and Finland, it was influenced by the work of Ling, with an emphasis on massage training. In the United States, it was as a result of the polio epidemics and the need to treat those wounded during World WarI3.

Physiotherapy education right from the entry-level is vital in providing a base to prosper and develop. Education of students within the allied health professions aims to equip graduates with the required knowledge, skills and professional behaviors to work safely and competently as contemporary health care professionals. Broadly, clinical education involves learning clinical and professional skills in the workplace6,7. This provides students with the opportunity to actively build and incorporate theoretical and practice knowledge, to socialize into a professional   practice community and to understand the complexities of health care delivery8-10. Awareness of inter-professional practice is an important graduate skill11.

Another reason that can be cause to reduce the satisfaction of physiotherapist towards their profession is the job stress which increases the risk for a variety of adverse outcomes. These outcomes include burnout, turnover, sickness absence, Work-related musculoskeletal disorders (WMSDs) and other medical conditions12-16. According to Higashiguchi, physiotherapists are invaluable assets to the hospitals and institutions where they practice. Yet the increase job turnover among physiotherapists is a reason for concern. Whether these reasons are economic or otherwise, they all give basis for seeking employment elsewhere. Increase workload leading to burnout may be another contributing factor as to why physiotherapists leave their employment17.

A cross sectional survey was conducted.

A non-probability convenient sampling technique was used for data collection.

The data was collected over a period of 12 months. 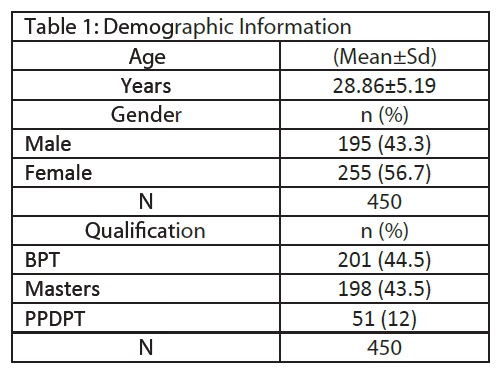 Self-administered questionnaire was used to collect data. Physiotherapists were approached at the place of their work and after explanation of the objectives of research a written consent was taken from each participant. The Questionnaire consisted of three portions corresponding to demography, barriers, and assessment of satisfaction levels. The Physiotherapist that fulfilled the inclusion criteria were asked to fill the forms. Data collected was entered and analyzed on SPSS version 20. Relevant descriptive statistics was taken out depending on the type of variable under the study. P value less than 0.05 was considered as significant.

Informed consent will be taken from all participants after explaining them the objectives of the study. If required ERB clearance will be taken before start of data collection.

The level of satisfaction of physiotherapist towards their profession was assessed through a survey questionnaire. A sample of 450 physiotherapists was inducted in the study that filled the questionnaire based on their own perception and experience regarding their profession. The average age group was 28.8 ± 5.2 out of which 43.3% were males and 56.7% females. Approximately 44.5% of the respondents were Bachelors in Physical Therapy and the other 43.5% and 12% completed their masters and PPDPT respectively. For the general working condition, as it is one of the assessment tools for evaluating the level of satisfaction in this survey, we compiled four characteristics; working hours each week, flexibility in scheduling, location of work, amount of paid vacation time/sick leave offered. Among 450 individuals 72.9% people were somewhat satisfied while 17.6% were extremely satisfied with their working hours each week. When asked about the flexibility in scheduling 70.7% were somewhat satisfied and 16.4% respondents were extremely satisfied. 72.7% respondents were somewhat satisfied with their location of work. In response of 51.3% respondent, they were somewhat satisfied with their paid vacations. As shown in figure 1, most of respondents were somewhat satisfied for all four characteristics of general working condition. The reason for dissatisfaction in male and female physiotherapist was seen with respect to heavy workload and low salary structure. It has been noted that 42.6% male and 27.8% female strongly disagreed with the issue close proximity with patient while 24.6% male and 25.1% females disagreed. In response of moving heavy clients as barrier 46.7% male and 27.5% female strongly disagree, while 7.2% male and 14.5% females were strongly agreed. When ask about the poor salary structure in comparison with male and female 5.2% male and 3.9% females were strongly disagreed while 69.1% male and 59.6% females have neutral opinion about their salary structure. 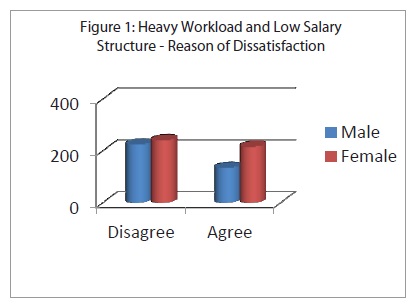 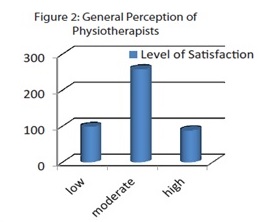 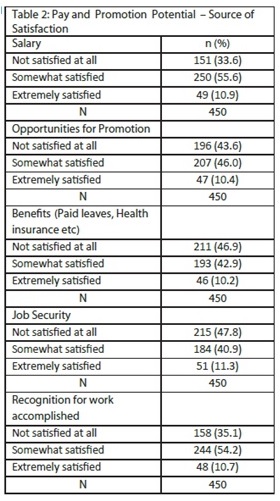 In this survey, we assessed different dimensions of the physiotherapy profession in terms of general working conditions, pay and promotion potential, work relationships, use of skills and abilities and barriers were evaluated. Results revealed that physiotherapist have moderate level of satisfaction towards their profession. In other studies S Bodur and H Sur, concluded the global job satisfaction measured by a single item questionnaire and indicate that over 50% of the physiotherapists were dissatisfied with their job, while the characteristics of the study populations are not comparable. These findings are constant with the other studies on job satisfaction among health care providers in Turkey 22,23. A study was carried out within the framework of occupational therapy to determine the standing of physiotherapy relative to a range of professions, including a number from the medical field. The results indicate that physiotherapy possesses an intermediate status, and one that can be broadly equated with that of osteopathy: in fact, the two professions are virtually indistinguishable on most of the dimensions employed in the study. The results also reveal the position of physiotherapy relative to the nursing profession, and to that of medical practitioners24. In other studies, job stress has been linked to medical and psychiatric conditions, including depression and cardiac disease. In health care workers, job stress has been linked to reduced quality of patient care 25-27. Studies have also demonstrated that physical therapists may experience Different dimensions of work stress have been studied in physical therapists, but common themes have emerged. Common sources of work stress have included excessive workloads (both clinical and administrative) and a lack of resources (equipment, staffing, and time)28,30. The professional culture in physical therapy may complicate the work environment. Physical therapists hold themselves to high professional standards and may experience a conflict between clinical realities and personal ideals. In the face of external pressures, including increasing workloads and job demands, job stress may be viewed as a personal failing29,31,32. Grembowski D33, Bovier PA34, and Seo Y35 in their studies show that there is a strong correlation between income and job satisfaction33-35. Another study by Bodur S demonstrated in Turkey that income and working conditions were main factors for dissatisfaction for health care providers22. Our study also highlighted the fact that the opportunities for personal and professional growth were one of the best forecaster of job satisfaction. According to Japanese physical therapy association, Takeda T, and Yasuda M study observed that among the clinician with more than 15 years of working experience who work 24 to 32 hours work each week on OPD having largest number. The white paper said that the therapist who spends less than 24 hours each week could increase in number, if they have more working experience36. These differences show therapist who have more than 10 year of working experience may not feel over work because they are self-assured in their work. This research identified the expression of wishing to stay within the organization for a bright future and the perception of stability or job security as a general indicator of job satisfaction and stress. Both factors appear equally important as they were significantly related to the effort and reward imbalance of the rehabilitation staffs affected by the work load and number of patients that the therapists have to treat per day.