The triad of symptoms seen in autism, comprising impaired social skills, verbal and non-verbal communication, and stereotypical behaviors, may be severe enough to have a debilitating effect on a child’s life which disturbs the child psychosocial behavior. This study discusses the usage of a low tech alternative and augmentative communication (AAC) system chosen for one such child (referred to as F.S.), having profound speech and language difficulties that interfered with her everyday communication, and hindered her participation in educational and social activities. AAC is one of the most recommendable and highly reliable tools to assess the children disability and the burden caused by it. AAC is a method of communication that utilizes all available modalities to help individuals with severe expressive language deficits. This AAC method was a (modified) picture exchange communication system (PECS), to maximize her current skills and introduce others.

It was seen after a period of six months that her language, communication and social skills had improved day by day. With the help of AAC, the subject was able to make requests, protest and fulfill her basic communicative requirements.

Autism Spectrum Disorder (ASD) and autism are terms that are used for a group of complex disorders of neurological development1. These disorders are characterized by difficulty in social interaction, communication, and repetitive behaviors.

Symptoms of autism are subject to individual differences, thereby making it a spectrum disorder 2. For individuals with severe expressive language delays as a result of autism, Alternative and Augmentative Communication (AAC) is atherapeutic option.

The American Speech and Hearing Association (ASHA) defines AAC as an area of practice that attempts to compensate, either temporarily or permanently, individuals with severe expressive communication disorders2. It is multimodal and flexible, permitting individuals to use every mode possible to communicate. The prime purpose of AAC is to salvage the abilities of individuals and maximize communication through other media.

A cross sectional quantitative study was conducted in the clinical setting based on an intervention provided to an individual over a period of 6 months.

The sessions were structured, with a one- on-one approach where the clinician sat opposite to the client. Intervention relied on heavy tangible reinforcement through variable and intermittent reinforcement schedules. The data was collected by reported observations of two speech- language therapists, subjective and objective notes taken every session, and interviewing the mother.

Fatima S. (F.S. henceforth – complete name was not provided to maintain privacy) is a seven-year-old female diagnosed with autism and developmental delay. She was referred to ZCSLHS to receive therapy, at six years of age.

F.S. was born with a bilateral cleft lip and palate, had seizures as a baby and had a history of ear infections, as well as other complications.

Speech and language milestones were profoundly delayed, since vowel vocalizations started at the age of six years.

A psychologist diagnosed F.S. with autism. The speech language therapist was unable to conduct standardized assessments to formally judge the levels of speech, language and communication during this study period.

Additionally, a visual schedule was introduced to familiarize her with her routine. Through variable and intermittent reinforcement schedules. The data was collected by reported observations of two speech- language therapists, subjective and objective notes taken every session, and interviewing the mother.

As of August 2012, F.S. played alone, presented with attention, sensorial and behavioral issues, was unresponsive when called by name (4/6 times), and maintained fleeting eye contact when engaged in a one – on – one interaction. However, F.S. learnt to communicate through non-verbal avenues; she took the communication partner to the desired objects or took out the picture card of the item from her modified AAC.F.S. was trained to use modified PECS by heavily reinforcing every correct response.

F.S. was familiar with 60 to 80 items used in her milieu and was able to use them to fulfill her needs. F.S. touched items that she needed; therefore ‘touching’ was made her communicative method. Each time she touched an object she was immediately rewarded tangibly and her behavior was reinforced.

A camera was used to take pictures of everyday objects, starting with foods and items of interest, and gradually progressing towards pictures of clothes and places. The items being touched were replaced by pictures. Additionally, F.S. began to produce a combination of vowel sounds. She had started combining vowels with the initial developmental consonants to produce ‘mama’ and ‘baba’.

After six months of SLT, results were compared to assess the progress made by F.S4,5. Discussions with the mother revealed that a helpful change had occurred through PECS. The additional intervention of sound therapy helped her express her emotions as well. However, much is yet to be achieved.

The clinicians working with F.S. reviewed her physical, sensory and cognitive abilities, as well as her chronological age and lexical skills prior to choosing an AAC device /method6,7. After much consideration it was decided to use a modified version of PECS. This low tech AAC system was chosen to maximize her current skills and develop new ones. The parents were counseled to follow up on therapeutic strategies in other environments. 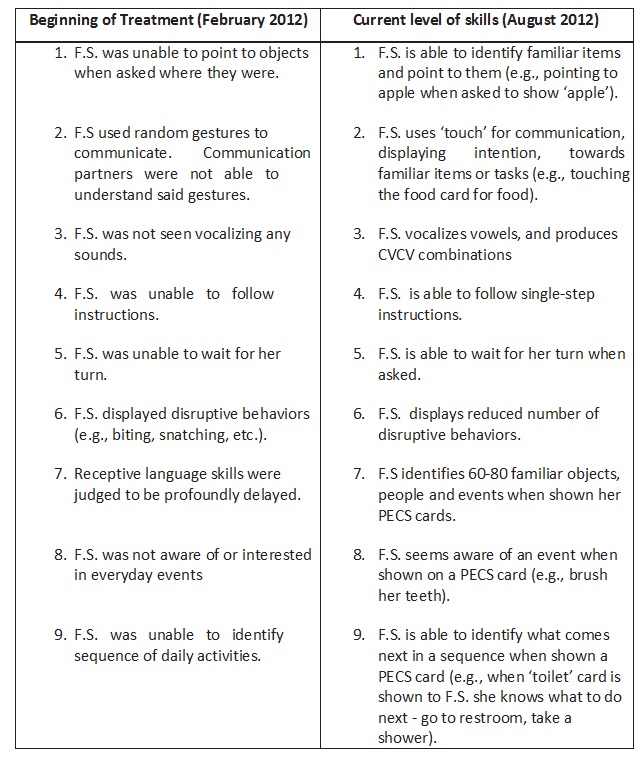 After providing intensive therapy to F.S., she was able to express her needs effectively. The benefits of using AAC with her have been highlighted in the table above8.There was an improvement in her receptive and expressive language, phonological and social skills. The AAC and visual schedule helped her with predictability, requesting and protesting 9,10.

Through PECS, F.S. learnt to exchange a single picture for a desired item, and will eventually learn to construct picture-based sentences and add attributes in her request.

Using AAC for communicatively challenged individuals helps establish effective functional participation in everyday life. In the case of F.S., it was highly effective in shaping random gestures into meaningful ones that conveyed intention, thereby enhancing interaction with people in society. The modified PECS boosted her social and communication abilities; not only did she understand others better now, but also made herself understood. F.S. now stands at the threshold of developing her literacy skills through the same approach.

The need to have professional training for successful intervention for communicative disorders and to develop AAC systems/devices is strongly felt in Pakistan. The skills of F.S. could have been harnessed in the first few years of her life, reducing the despair and frustration of her parents and others in similar situations.