Ergonomics is the scientific discipline concerned with understanding of the interaction among humans and other elements of a system. Thus, ergonomics attempts to always ‘fit the job to the man’ having realized the limitations and capabilities of man. The main aim of ergonomics is to reduce the on-job risk of injury as well is to improve the productivity which benefits the organization.

The aim of this study is to reduce risk of injury to make job easier and ultimately increasing the productivity to the benefits of organization and community.

It was observed that only 28.67% were aware of the word Ergonomics but 82% of admitted to have knowledge of body posture and productivity in whole sample size. It was noted that 85.33% considered that maintaining body posture can prevent musculoskeletal disorders while on the other hand 14.67% thought that it improves body outlook. 72.33% people admitted to have musculoskeletal problem where 27.67% people replied negatively and different specific tasks contribute to discomfort in posture hence affecting generalized body and the efficiency of work.

The International Ergonomics Association (IEA) defines ergonomics as ‘the scientific discipline concerned with understanding of the interaction among humans and other elements of a organization or system, and the profession that applies application, theory, data and methods to design in order to optimize human well-being and overall system performance1. Thus, ergonomics attempts to always ‘fit the job to the man’ having realized the limitations and capabilities of man2. The main endeavor of ergonomics is to reduce the on-job risk of injury as well is to improve the productivity which benefits the organization3,4. It is a well-known saying about health that “Health is Wealth”. Earning is the main objective of life, but most of the people don’t know how to work properly in a healthy environment. People work in order to get wealth at the cost of their health5.Most of the people don’t have concept of good working place according to health aspect. It was observed that those people who are not aware of the rights for a proper work environment faces health problems (hearing impairments)6 even leading to early deaths7. Takala (2005) stated that 2.2 million people die of work-related accidents and diseases annually. Similarly, Leigh et al (1999) had estimated that non-fatal injuries in Sub-Sahara Africa as 770,000 per annum and fatal injuries of 9900 per annum. They predicted 9.02 million injuries per annum. To reduce the predicted rate of injuries, ergonomics has to play a crucial role. However, despite the enormous benefits accruable from the application of ergonomics, there seems to be lack of concern towards ergonomics from developing industries (Rogan and O’ Neill, 1993). However, O’Neill (2000) observed that the developing countries like India, Brazil, South Africa and Thailand acknowledge the importance of ergonomics and have indigenous capabilities to apply ergonomics principles and undertake ergonomics3. In Pakistan a large number of the industrial units don’t provide a healthy workplace for their workers and endanger the lives of their workers at the cost of money/low wages8. In loom industries most of the workers lose their hearing because of noise pollution. The main reason is lack of ergonomic awareness in skilled workers.

The similar ergonomic problem is faced by School going children developing low back pain because of their school bags, exerting extra pressure on L4 and L5 because school bags limit for children is 10% currently recommended and inappropriate shoulder strap adjustment and school bag hip belt also contributed factors for back pain 9,10,11. Medical care staff also suffers from same ergonomic problem due to over work as they are very less paid due to which they are forced to do two jobs at a time to meet their expenses that’s why nursing has highest prevalence of backache than other professions12. Currently 40% of the world’s occupational and work-related health costs are attributed to musculoskeletal diseases and ergonomic interventions have been successful in reducing the number of MSDs by over 50%, especially in professions that expose employees to a high level of work risk factors13. In 2010, a study on ergonomics awareness in Nigeria done, which shows only 2.1% awareness in medical profession about ergonomics3. In Malaysia, manufacturing industry are now moving towards the right path14.

Internationally a lot of work has been done on awareness and importance of ergonomics among professionals and on community level. In Pakistan, research on this issue is scarce; therefore, the topic was selected to analyze the awareness of ergonomics in physiotherapy and medical students. The main aim is to reduce risk of injury to make job easier and ultimately being increasing the productivity to the benefits of organization and community.

A sample size of 300 was taken among which 47.3% were Physiotherapy students and 52.7% were Medical students as shown in Table. The male to female ratio was 1:2 respectively.

It was observed that only 28.67% were aware of the word Ergonomics but 82% of admitted to have knowledge of body posture and productivity in whole sample size. Regarding previous experience to any postural awareness training programmers, 62.33% gave negative response where only 37.67% responded positively. Regarding equipment that can increase productivity, 65.33% respondent replied positively but 34.67% had no idea about that.

It was noted that 85.33% considered that maintaining body posture can prevent musculoskeletal disorders while on the other hand 14.67% thought that it improves body outlook. 33.33% people felt that they can be role model in society in terms of health by using good ergonomics.

It is known that different specific tasks contribute to discomfort in posture hence affecting generalized body and the efficiency of work. Scrutinizing the reality, respondents were asked about different postures, on which, the majority 38.33% referred long time sitting in the class for lectures as the major cause. In view of others, 14.33% prolong standing and bending postures were also leading causes. Few 10.33% regarded heel wearing as another cause of discomfort, 13% responded in negation and 9% respondents had no idea about factors contributing to discomfort. 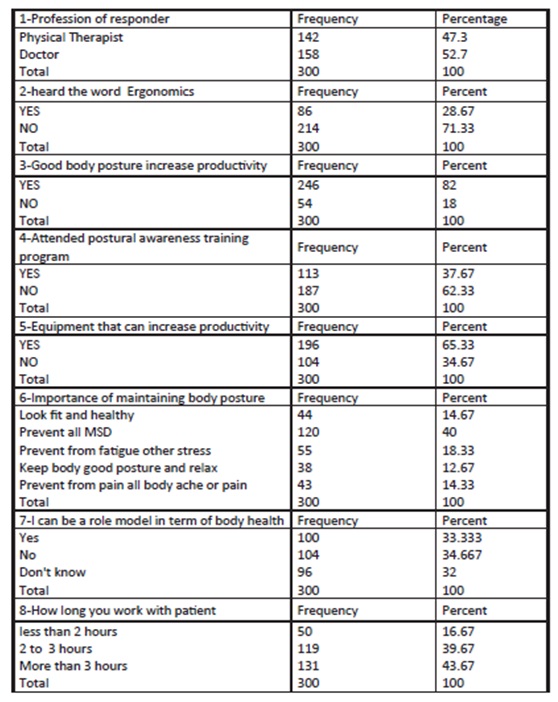 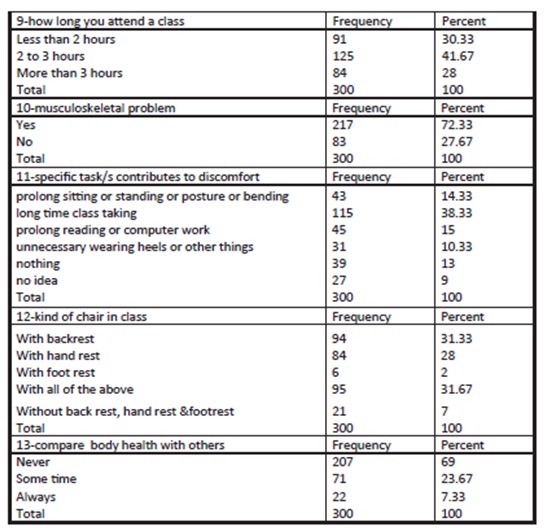 The awareness of ergonomics among the physiotherapy and medical students was assessed using a self-administered questionnaire. It was observed that only 28.67% were aware of the word Ergonomics on the other hand a study conducted in Malaysia revealed 35.6% manufacturing industries have a high level of ergonomics awareness15. Elizabeth Mailoa & Peter Rovani in their research conducted on dentists found that 55.7% of dentists had sufficient knowledge about ergonomics16.

It was observed in our results that 82% of the respondents thought that good body posture can increase productivity and nearly same results were found by Panagiotis Mitropoulos who used different strategies and parameters to see the improvements and productivity of work and further states that by improving posture productivity can be increased 17.

72% respondents in our study confirmed that they experienced musculoskeletal problems due to poor ergonomics. In 1998, Bramson, gave similar evidence and said that 81% dental operators suffered from musculoskeletal problems due to the same reason18. Karen massin in 2008 in her research “distal lower- extremity pain and work posture” reported 9.4% people having significant pain in ankle or foot and 6.4% having lower leg or calf pain19. D’Souza JC, Franzblau A, Werner RA in their review of lower extremity musculoskeletal and vascular disorders gave a huge prevalence of 83% for foot and ankle pain and 20% prevalence for lower leg20 .The same musculoskeletal problems were identified in Indonesia by Elizabeth Mailoa & Peter Rovani who claimed 56.8% of respondents having complaints of pain, with 25% of complaints of back pain, 23.9% limb pain and 8% of neck pain16.

Regarding working with the patient in one day, majority of our respondents, that is, 43.67% stated that they work more than 3 hours with partients where 39.67% stated 2-3 hours and 16.67% stated less than two hours. Elizabeth Mailoa & Peter Rovani enquired the same and stated 61.4% of respondents work 3-4 hours with patient16 Based on specific tasks regarding discomfort 38.33% and 14.33% regarded long sitting in class and prolong standing/sitting as the major cause where elizebeth found the same in sitting position with 51.9% respondents complaint16.

Stress is prevalent and costly problem in today’s workplace. About one third of workers report high levels of stress21.one quarter of employees view their jobs as the number one stressor in their lives22.three quarters of employees believe the worker has more on job stress than a generation ago23. Evidence also suggests that stress is the major cause of turnover in organizations21. With continued stress at the workplace, workers will develop psychological and physiological dysfunctions and decreased motivation in excelling in their position24. The Kenexa Research Institute released a global survey of almost 30,000 workers which showed that females suffered more workplace stress than their male counterparts. According to the survey, women’s stress level was 10% higher for those in supervisory positions,8% higher stress in service and production jobs than men and 6% higher in middle and upper management than men in the same position25 similar to our study in which it was seen that 18.33% people had stress which in turn was revealed to have impact that is 40% on altered posture and resulting in musculoskeletal problems.