Background: Sciatica or more commonly sciatic nerve pain is characterized by low back pain that radiates down towards knee or below knee, paresthesia associated with tingling or numbness and weakness of muscles of foot and leg. Most important cause of sciatica is herniated disc which cause nerve root entrapment. Other causes may include lumbar stenosis or spinal tumors. The goal of the study is to determine the effects of graston instrument technique soft tissue mobilization in patients with sciatic nerve entrapment.

Methods: Patients were recruited and allocated randomly in two groups. Group A (Lumbar traction with neural mobilization) and Group B (Graston technique along with lumbar traction and neural. 4 weeks of intervention were given to both groups.

An experimental study (RCT) was conducted in the physiotherapy department of Fatima Memorial Hospital (FMH) located in Lahore, Pakistan. The trial is registered having reference number # IRCT20191130045554N1. The study was approved from ethical review committee of Riphah International University. Convenient sampling technique has been used for the randomization of patients. Twenty patients are recruited to study. The duration of the current study was 6 months. Only male patients aged between 30 to 60 years are recruited to study. Patients diagnosed with sciatica along with radicular pain in lower back with duration of less than 12 weeks after onset and the patients having Pain upon active SLR in 30-70̊ sensitivity 0.6719 specificity 0.2620. Patients were not included in study if they exhibited spinal Fracture, Spinal tumor or any malignancy, Psychiatric Disorder, History of Osteoporosis, Rheumatologic disorders, Pain beyond 70̊ or below 30̊ on active SLR, Positive compression and distraction test of SI joint. And positive gaenslen’s test. Participants were recruited into Group A and Group B by lottery method (without replacement). Each member was approached to draw either A or B cards from a box. Alphabet A will be allocated to Group A and alphabet B will be allocated to B group. Lumbar Traction along with Neural Mobilization was given to Group A participants for 4 weeks, 3 sessions per week. Sustained mechanical lumbar traction was applied on patient with average of 30-45kg for 10 min(18). Garston Technique along with lumber traction and neural mobilization was given to Group B participants for 4 weeks, 3 sessions per week. During 4-weeks the Graston group recieved IASTM (Instrument Assisted Soft Tissue Mobilization) on posterior fascia, sacrum, and lateral rotators of hip and hamstring bilaterally. In the first, subjects were required to kneel directly on the bed. The posterior fascia IASTM was use to stimulate the lumbar posterior muscles i.e., erector spinae (iliocostalis, longissimus), as well as the multifidus. Subjects were instructed to kneel down on the bed for instrument assisted soft tissue mobilization (IASTM) on sacral region. For IASTM of hip lateral rotators, position of the patient is prone kneeling with knee and hip flexion and for IASTM on gluteus Maximus and gluteus medius the preferred position is side lying. In the prone position, IASTM was applied to hamstrings tendon which includes biceps femoris, semitendinosus and semimembranosus. The IASTM treatment was performed for about twenty seconds in a direction parallel to the muscle fibers being treated with the instrument at a 45° angle with instrument. Continuing that, for yet another twenty seconds treat the muscles in a path perpendicular to the muscle fibers with the instrument at 45° angle, for a total treatment period of around forty seconds. Mechanical traction unit was used to apply sustain lumbar traction. Graston instruments of Rocktape Company were used for IASTM. Neural mobilization of sciatic nerve was performed in straight leg raise with dorsiflexion of foot. Data collection tool that were used in this study are numeric pain rating scale having reliability and validity of 0.96 and 0.86-0.9521 respectively and modified oswestry disability index having reliability and validity of 0.91 and 0.7522 respectively.

After collecting data from defined study setting, data was entered and analyzed at Riphah International University, Lahore by using Statistical Package for the Social Sciences (SPSS) for windows software, version 25.  Statistical significance was set at P=0.05. In descriptive Statistics the summary of group measurement are shown by using Frequency tables and Clustered bar charts over time. In Inferential Statistics Normality of the data was assessed using Shapiro Wilk test. Based on p-values parametric and non-parametric tests was decided. Difference between groups was assessed by independent sample T test/ Mann-Whitney U test. Difference within each group was assessed by two-way ANOVA.

Baseline values of both groups’ sociodemographic data were equivalent on the basis of to mean± std. The mean age of Group A participants was 40.30±3.74 years compared to Group B 39.40±7.98 years.

For comparing NPRS pretreatment and post treatment between two groups. Independent T-test was performed and findings showed there was no significant statistically difference between pre-treatment NPRS values of two groups with p value greater than 0.05. In Group B, the NPRS score falls to a greater extent with a mean value of 1.70±1.41 compared with Group A 3.99±0.99 in post-treatment 4th week.

To compare pre& post-treatment MODI between two groups Independent sample t-test was used. Findings demonstrate there was no significant statistically difference between pre-treatment MODI values of two groups with p value greater than 0.05.

Clustered bar graph indicates trend improvement in NPRS from pretreatment to post treatment week 4, which has been steadily improved in both groups but higher in Group B than in Group A. 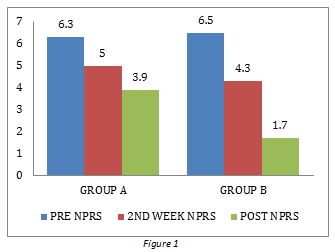 A progress pattern in MODI from pre-treatment to post-treatment week 4 was shown in the clustered bar chart, which was steadily rising in both groups but higher in Group B compared to Group A. 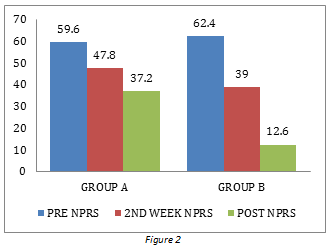 The goal of the current study was to determine the effect of graston instrument soft tissue mobilization on pain and functional disability in patients with sciatic nerve entrapment. Sciatic nerve pain is characterized by low back pain that radiates down towards knee or below knee, paresthesia associated with tingling or numbness and weakness of muscles of foot and leg(1). Sciatic nerve entrapment may occur from pelvis to distal thigh. Most trapping cases occur between greater sciatic tuberosity and ischial tuberosity. At the level of greater sciatic piriformis syndrome caused by piriformis muscle trapping of the sciatic nerve5.

The current study results show that there was no statistically significant difference between pretreatment NPRS and MODI values of 02 groups with p value > 0.05. In group B, NPRS and MODI decreased to a greater extent in the 4th week post-treatment with mean value 1.70±1.41 and 12.60±11.27 respectively compared with group A 3.99±0.99 and. 37.20±8.75. Intensity of pain and level of disability decreases more in group B because of additional graston technique with base line treatment i.e., Lumbar traction and neural mobilization. A similar study was conducted in patients with low back pain to assess the effects of graston correlate with general exercises. Their results showed that graston technique decreased pain in low back pain patients. Their findings suggest graston technique to treat and rehabilitate patients with chronic low back pain14.

The present study had several limitations. Firstly, no longer follow up was conducted, usually a six to eight weeks or longer intervention period has been used for significant progress. Secondly, sample size was small and lastly the study was limited to male gender. Further research is needed to investigate the long-term effects of graston instrument on pain and disability in patients with sciatica.