BACKGROUND AND AIM
Muscular strength is an important predictor during the games among players that need to be addressed during the rehabilitation process.
METHODOLOGY

This Cross sectional–analytical study was conducted on a sample of 200 male tennis players. The data was collected using convenient sampling from Tennis players in different clubs of Lahore. Hand held dynamometer was used to measure the strength. SPSS version 21.0 was used for data analysis.

Sports players develop endurance in their field of play as they use their upper extremity in different positions as in tennis game including hopping, hitting, stroking and curving with receptive ability1. Muscular strength is defined as the ability of a muscles to apply force on an external environment or resistive force2.A large numbers of factors may contribute regarding the performance of the players3. While scientists cannot manipulate genetics of the players, all they work is on the muscular power of the athlete to enhance their performance. Tennis is such sports activity in which players shift their positions abruptly and use their muscles in multiple directions4. Tennis players success is related to multiple factors including psychological, technical factors, tactics of the players and most importantly the strength of the muscles4.In this game due to increase demand of physical activity the rate of injury also increases and injuries of ankle, elbow joint, and shoulder joints are also common. Most specifically the injury involving shoulder muscles i.e. 75% that’s why the shoulder injuries lead to instability of the joint resulting lack of coordination among the  players6 The muscular strength is commonly  assessed using reliable and an easily available  device , which is considered as gold standard tool and mostly used by the researchers is the – Hand held dynamometer (HHD)7 Despite of age factor or gender, the use of muscles is related to muscular strength development  and its  decline2.  Such observations give additional osteogenic capability of standard tennis interest and show a positive relation with muscular strength and bone size. But the agonist /antagonist muscle action in upper extremity enables estimation of muscles and bone adjustments3.Taking everything into account, this investigation underscores that shoulder torment in the playing arm is a typical side effect in recreational players. Despite the fact that the agony causes  issues, the players used to play with knowledge of facts  about adverse effects of muscular imbalances  yet playing with on-going side effects4.
This examination upheld present information of a connection among muscle quality, bulk, and bone thickness. The investigations shows that playing tennis initiates neighborhood mechanical strains on the predominant lower arm, increasing bone size at the dominant side. The end to end distinction might be incompletely clarified by muscle compressions. The approximation of getting ready power would have enabled a predominant perception of the unpredictable segments interfacing the biomechanical components to bone growth.(5)  Various factors can be considered while regarding  the fitness or physical capacity of the tennis players ,including age , maturity and body size  and present level of health as key determinant of the muscular strength.(12)The commitment of either factor might be identified with the multidimensional nature of the activity task utilized during preparing. The reason for this examination was to gauge how much muscle hypertrophy adds to gains in strength during activities of shifting multifaceted nature. This study was aimed to measure muscle strength with use of dynamometer due to lack of data in population of study. This study may be helpful for the trainers.

Study Design: This cross-sectional study was conducted in clubs of Lahore.
Duration The duration of study was from July 2020 to January 2021. The ethical approval was taken from the University of Lahore. (IRB-UOL-FAHS/730-2020)

Outcome Tool: Players were assessed for Muscular strength and it was measured in lbs. using dynamometer, which has (r=>0.91) while inter tester and intra-tester reliability was excellent for all movements (at ICC >0.85,present in literature. (6)
Data Collection procedure: The result of muscle force and contraction velocity is said as muscular strength which is an essential part of rehabilitation and dealing with muscular weakness, injuries and strength training. (7) Before the data collection an informed consent was signed by participants. The muscle strength was assessed in lying, and were participants were asked to push with available force in different plots, as per required muscle movement to confirm the specificity of muscle. (8)
We have assessed major muscles of elbow and shoulder of both sides. The data was analyzed through SPSS version 21. BMI was categorized in underweight, normal, overweight, and obese. (17) Self -administered questionnaire was used to collect demographic data/information about participants for sort of game, dominant hand, gaming hour.

All subjective information was presented as mean ± S.D and frequency of basic details was presented in tabulated form, independent t –test was used for measuring the outcomes of interest and Pearson correlation for comparison of strength. The p value was taken as <0.05 as significant.

The present study comprised  of male tennis players having mean age 21.04 ±3.12 years. Most of the participants (62%) in normal BMI, while 16% were in underweight category BMI.

Table No: I Demographic detail of Participants 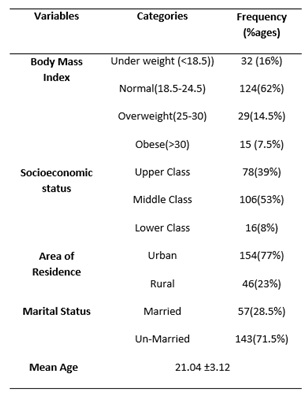 Among the participants, there were n=182 responded that they were right hand predominant. (Table No. II) The Mean strength right side flexors of elbow was more than extensors and Internal rotators of shoulder strength for in tennis players was more (35.19±5.71 lbs.) than external rotators. (Table. No. III)

Table No: II Characteristics of Participants 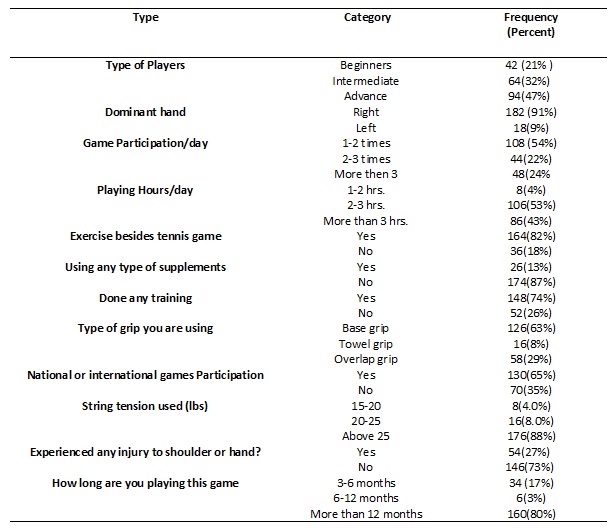 Table. No III Muscular strength of Upper Limbs among Participants 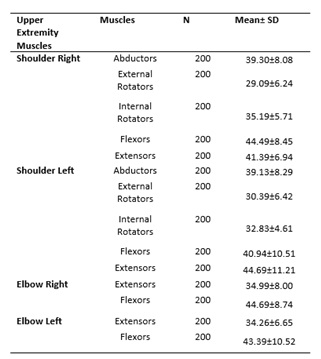 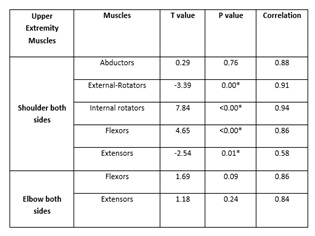 The study of Anna Suza , Right side shoulder abductors, extensors, flexors were strong compared to their counter parts, and an estimated bilateral difference between right and left side was observed. The difference was also noted in right side elbow flexors at mean of 25.34±3.96 and for extensors 23.90±6.99, and for left elbow flexors 21.58±5.82 and extensors 26.10±8.56, showing a big difference in left side.  (9) The physical training of tennis players in combination with strength training is associated with physical capacity leading to increased endurance level of the players. (19) But in our study Abductor right side of shoulder were strong in tennis player (39.30±8.08 lbs), While Internal rotators strength right side of shoulder in tennis players was more (35.197±5.71lbs) than external rotators. But this strength was quite different from study of Anna Suza. Similarly, Mean Flexors, extensors, rotators of both shoulder were having good strength. There was slight differences noted but these results were in contrast to this study. Comparing to this study, Mean of Flexors strength right side and left side of elbow in tennis players were stronger (44.69±8.74) than their counter extensors strength (34.99±8.00). The study in 2015 among tennis players stated that both sides of shoulder have high strength despite of dominant or non-dominant hand. But internal rotators strength was lower compared to external rotators. This was studies in two groups, in which ne group showed a significant good strength than other. Literature support that tennis players have high strength of internal rotators and can play the games. (10)The level of stiffness values can increase the stroke velocity, because the transition of power required from lower part of the body towards upper. There should be strong correlation of strength and power, because the study has proved that both of these determinants poor correlation due the strokes nature and dependency on age21.In this study statistically significant (p value 0.00) between strength of external rotators of right and left shoulder .Similarly strength of internal rotators and left shoulder in tennis players was statistically significant <0.00 respectively. Studies support that functional ratio of internal rotators concentric and external rotators eccentric have relationship that can be due to produced force in the shoulder muscles22.  In our study we have 16% of the underweight and 62% sports players  normal BMI category , that might had effected the muscular strength and the strength homogeneity of both sides was not correlated. The high lean body mass, found high strength but it was not associated with biological age factors. Hence it can be considered that lean players will have more strength with depending on the age or maturation23,24.

In this study we used convenience sampling technique thus it limits generalization of our results to those who have different characteristics from those of our sample for example the players with shoulder injury. The use of standard strategy would ensure further solid estimations of upper extremity strength in both examination and clinical settings as contrast with results of the investigators. The work can be further proceeded on quantifying  the upper extremity in various players other than tennis players to find out the correlation among various players dependent on their games.