A cross sectional study was conducted on 370 Army recruits. Non-probability convenience sampling method was used to enroll male military recruits with age of 18 years or more undergoing training in air defense center. A self-administered tool was used as study questionnaire, adapted from previously reported literature. Data collection on the questionnaire included age, weight/height, smoking status, prior physical activity, prior injuries and occurrence of injury during training.

Rehabilitation efforts on the basis of increased knowledge related to the risk factors and also the injury mechanism should be made to prevent further from injuries.

Department of Medicine and Surgery,

Department of Medicine and Surgery,

Physical training in military and sports are the main cause of musculoskeletal injuries. At least half of the recruits suffer musculoskeletal related injuries, which cause a substantial loss of man power (working days), economical burden due to medical costs for treatment and increased risk of attrition1,2. Injuries during basic training represents an important source of morbidity in military and is the biggest health problem challenging the military forces in peacetime and combat operations3.

The musculoskeletal injuries occurring during 8-9 weeks of initial basic combat training (BCT) which can be prevented by higher level of physical fitness. However, more physical training to improve physical fitness may also cause higher rates of injuries. Thus, in military physical training programs, the need for fitness must be balanced with the risk of injuries. [4] Some studies show that musculoskeletal injuries during military training are associated with history of low level of physical activity, previous history of injury, decreased level of previous leisure time physical activity, high amount of body fat, smoking, age and other biomechanical factors4,5. It is also reported that increased risk of musculoskeletal injuries might be associated with failure to adapt the rapid rise in loads5. On the other hand some extrinsic risk factors have been also identified which can be controlled by intervening as compared to previously mentioned intrinsic risk factors. The training (total amount of activity of it), footwear and running surface are considered to be most common extrinsic risk factors associated with injuries during training6.

There are four main domains included in preventive strategies for musculoskeletal injuries i.e. (a). Identification of intrinsic and extrinsic risk factors, (b). Retraining/ alteration of intrinsic risk factors, (c). Alteration of extrinsic risk factors, and (d)7. Education on prevention and management of musculoskeletal injuries. A collective strategy to decrease the occurrence of lower limb injuries is to alter the military training programs by decreasing the total marching distance and gradually increasing the training intensity8. In addition, following five steps can contribute towards injury control: (a). Investigation to assess the injury problem, (b). Studies to identify risk factors of injuries, (c). Studies to assess the effectiveness of proposed interventions in reducing injuries, (d). Implementation of effective interventions; and (e). Long term assessment of interventions9,10.

A cross-sectional study was conducted to identify the incidence and risk factors of injuries in recruits during military training. Ethical approval was sought from Institutional Review Board of Jinnah Post Graduate Medical center (JPMC). The sample size was calculated to be 370, by considering 40%11 prevalence of musculoskeletal injuries during training of recruits, 95% level of confidence and 80% study power using formula n=z2 [(p)(1-p)]/α2. Non-probability convenience sampling method was used to enroll male military recruits with age of 18 years or more undergoing training in the Air Defense Center. Recruits involved in Exodus i.e. a period when no training was conducted and the recruits were allowed to return to their homes were excluded from the study. A self-administered tool was used as study questionnaire, adapted from previously reported literature. It was developed and validated by a research physiologist Joseph J Knapik (U.S. Army Public Health Command)12. The questionnaire included data on age, weight/height, smoking status, prior physical activity, prior injuries and occurrence of injury during training.

After the approval of Institutional review board (IRB) and permission from Air Defense Center, the process of data collection was conducted between the months of August to December 2017. All the participants were consented prior to enrollment in the study, and ample time was given to complete the self-administered questionnaire. Hardcopies of study questionnaire were distributed among study participants to fill in the responses at their own pace.

IBM SPSS (version 19.0) data management software was used to analyze the data. The descriptive statistics of continuous and categorical variables was presented as mean/standard deviation and frequency/percentage respectively. Categorical group comparisons were made by using chi-square test to identify significant risk factors associated with musculoskeletal injuries. A p-value of ≤0.05 was considered statistically significant.

Details of physical activity performed by new military recruits before starting basic training are summarized in table 2. Regarding physical activity before training, 32.2% (n=119) recruits were found to be much less active, 8.9% (n=33) somewhat less active, 31.1% (n=115) about the same, 24.6% (n=91) somewhat more active and 3.2% (n=12) much more active. With respect to the average number of times per week frequency of exercise or sports played for at least 30 minutes in last 2 months before basic training, 53.2% (n=197) exercised at least 1 time per week. Similarly, 13.1% (n=46) reported to be involved 5 times or more per week in running or jogging 2 months before basic training. On the contrary, 13.2% (n=49) recruits reported to be not involved in any sort of running/jogging before training. 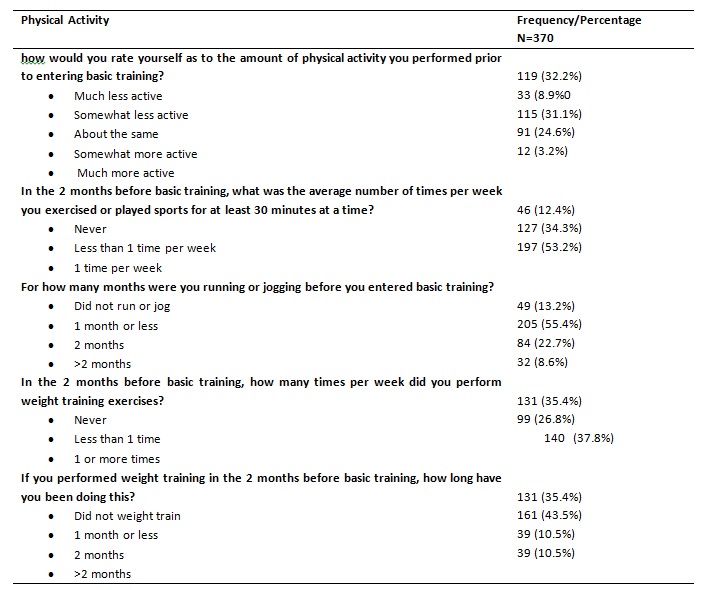 Regarding history of injuries, it was found that 18.1% (n=67) recruits had prior limb injury while, while 81.9% (n=303) never been injured. Around 5.7% (n=21) fully recovered from injury while 12.4% (n=46) did not fully recover from injury. It was reported by only 1.6% (n=6) recruits to be engaged in injury preventive activities. Details of physical fitness before starting new training in terms of endurance, sprint speed, strength, flexibility push-up, sit-up and body fat are given in table 3.

The rate occurrence of injury or fracture per recruit during the training was found to be 90/370 (24.3%). Univariate analysis between incidence of injury and the demographic variables included in the study shows that occurrence of injury/fracture was significantly associated with age, BMI, smoking status, history of prior injury and recovery from prior injury. Recruits belonging to age group of 20-24 years (p=0.027), BMI (p<0.001), cigarette smoking (p=0.015), and prior limb injury (p<0.001) as shown in table 4. 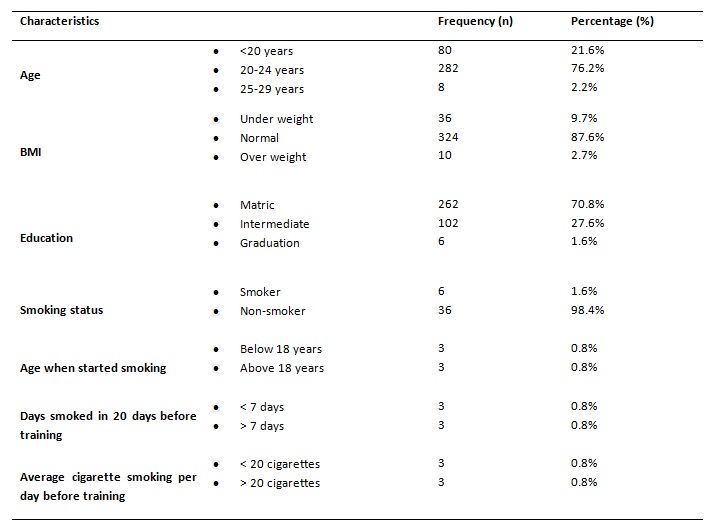 Being an Army recruit demands a high level of physical fitness and active life style. Less fit individuals who are under greater relative physiological stress, which poses them to higher risk of physical injury12. In addition to occurrence of injury during training, this study determined a number of factors that put recruits at increased risk of injury. According to Molloy JM et al, the recruits aged over 23 year sustained more injuries than younger recruits14. Also Parkkari J et al, stated that older age was an independent risk factor associated with injuries. [15] The reason for this is stem cell changes due to age slowdowns tissue healing and age-associated declines in fitness. [16] In this study the age was restricted between 18-29 years therefore the recruits between the ages of 22-24 years (p=0.027) sustained some injuries during training, whereas some studies stated that age effect disappeared when data was adjusted for BMI14.

Higher weight can increase the strain of some weight bearing activities which may include running, marching or walking. If the individual had not previously been habituated to the same extent of strain, this may cause an increase in the risk of injury. [15] In this study normal BMI was found to be associated with injury risk where as many studies stated that higher and lower BMI was an associated risk factor for training related injury 16 however, another study stated that there is no association between BMI and injury risk18. High frequency of sports/exercises was also found to be associated with risk of injuries in this study. According to costa e Silva L et al more exposure to participation incompetitive sports might be associated with a higher risk of injuries, and these results are similar to the findings of the present study19.

Reported literature showed that wound and bone healing is impaired due to smoking, which in turn affects immune function and reduces tissue strength21,23. In this study we also found that injuries were common among smokers as compared to non-smokers (p<0.001). On the contrary, a study by Psaila M et al, stated that smoking history, BMI and type of footwear were not associated with risk of injuries, but lower fitness level at the beginning of basic military training was associated with higher risk of musculoskeletal injuries3.

It was stated by Andrade Gomes MZ that the most common site of injury is the knee and development of training protocol in necessary to prevent lower limb injuries24. Molloy JM et al, stated that low endurance levels, low muscular endurance levels (sit-ups) and flexibility (both high and low) were risk factors for training-related injuries25. In this study the recruits had average levels of endurance, sit ups and flexibility as compared to same age and sex before entering the military training. In addition to physical impact, there is also substantial financial burden related to musculoskeletal injuries26.

This study recognized multiple risk factors that were found to be associated with musculoskeletal injuries during military training. Four step injury prevention model including identifying the problem; establishing the etiology and mechanisms; developing and implementing interventions; and evaluating the effect by surveillance should be adopted to develop successful strategies in preventing injuries during military training.

There is no conflict of interest to be disclosed by any author.