It was to determine association of physical activity and sleep quality with academic performance among Doctor of Physical Therapy students.

It was a cross sectional survey done among 230 DPT students of Riphah College of Rehabilitation, Lahore. The study was completed in 4 months. Both male and female having age range between 17 to 22 were included. Those doing their internship or part time job were excluded. Pittsburgh Sleep Quality Index was for assessing sleep quality, while physical activity was measured by Global Physical Activity Questionnaire. Chi square test was used to analyze association, while frequency tables, mean with standard deviation was used for descriptive statistics.

Physical activity and sleep quality are interlinked and can impact on academic performance in many ways. Physical inactivity and deprivation of sleep have impact on low academic performance. Sleep deprivation or sleeplessness is condition in which a person cannot get enough sleep. Physical activity is a movement produced by skeletal muscles and an adult must do 150 minutes low to moderate intensity exercise or 75 minutes moderate to vigorous exercise to stay healthy. Physical inactivity can make a person to have sedentary lifestyle. It is important to increase efficiency of academics in students with increasing their physical activity. Similarly sleep quality is also important this include no waking up for no more than once per night. Sleep quality and duration is also important factor for academic performance1.

Researches show that medical students have stressed themselves to study and get best results. So, they study day and night for better performance2. Less sleep at night causes day time sleepiness. Less sleep can affect student’s mood and he feel less enthusiastic, less motivation to do work, more irritable, and can have some symptoms of anxiety. Changes in mood can affect studies as well may damage mental health. Students sacrifice their sleep during exam because to give extra hours to study due to stress of their GPA. Poor sleep may lead to emotional burden, depression or anxiety of clinical level as well as other psychosocial conditions. Actually, altered patterns of sleep are a main reason of many mental health issues. Researches show poor sleep quality is also associated with cognitive impairment and augmented reaction time and abridged cognitive production hence, it is very important to check sleep quality of medical students3.

More literature shows that the physical activity effects cognition and mental abilities in a very positive way. It is predominant that the physical activity level in students is required for finest mental function. Students adopt sedentary lifestyle specifically during exams it mean they perform very little activity. Little activity can cause many problems like obesity and other diseases. Movement is a cure for making change in status of person’s physical, mental, and emotional states4.

There is quality evidence that the exercise may help in falling asleep more quickly and improve sleep quality. Hence, it is very important to check sleep quality and physical activity of medical students. Physical activity makes student’s active and stress free but if they are physical inactive then they face stress, anxiety and sleep difficulty. And they are healthy physically and mentally they can give best academic performance3.

Extremely poor quality of sleep leads to clinical sleep issues such as insomnia or sleeplessness. In which individuals have difficulty in falling asleep or maintaining their sleep. The clinical sleep issues such as insomnia is also characterized with depressed mood irritability and energy issues.  It can be short term which may range up to few days or it may be long term which rangers up to months. Search clinical sleep problems comes with underlying causes. These causes may include hyperthyroidism, hard failure chronic stress for chronic pain. Use of excess nicotine caffeine and alcohol are other reasons of sleeplessness5,6.

A cross-sectional survey was carried out in 2014 that included 254 students who performed swimming as physical activity showed higher the level of general physical activity performed, the better the GPA was in boys but in girls, aerobic activity improved grades so the research was gender-dependent and produced different results in males and females9. 409 undergraduate students participated in a cross-sectional study in 2016 to assess the association between physical activity and academic performance which showed 193 out of 409 who were found to be physically active achieved higher CGPA showing a positive association between these variables10.

A study explained the relation between academic performance and sleep quality that was influenced by stress. The study was a cross-sectional survey that included 144 participants 59% of them were stressed (low performance means low sleep quality and high stress) so poor sleep quality negatively affected their grades13.

In addition to sleep quality, sleep duration is also important. A research was conducted by Megan L. Zeek using cross-sectional study including 364 undergraduate students to find an association between sleep duration and performance. The study revealed that students with optimum sleep (7-8hours) scored a higher GPA14.

The scope of this study is limited to the sleep quality which can be good or poor. The students with clinical sleep problems were not the focus of this study. The study objective was to evaluate sleep quality and physical activity with academic performance among DPT students of Riphah International University. The result of this study was expected to encourage healthy sleep habits and physical activity specifically for those students who face more problems regarding their grades and are below average.

A cross sectional study was conducted. Data was collected from 330 subjects and the targeted population was the students of Physical Therapy of Riphah College of Rehabilitation Sciences, Lahore. The sample size was calculated through Raosoft Software.

However, due to coronavirus situation, the survey was compiled at final sample size of 230. Sampling done was Non-probability convenience sampling. Written informed consent was taken from the students to participate in the study. Male and female students of semester system were included and they were aged between 17 to 22 years. The students working as house officers and professionals were excluded from the study. Data were collected by online questionnaire/ forms that were circulated in students from 2nd to 10th semester. Pittsburgh Sleep Quality Index i.e. PSQI was used for assessing sleep quality, while the physical activity was measured by Global Physical Activity Questionnaire (GPAQ). The academic performance was measured taking their CGPA up to last semester. Data was analyzed using SPSS 20.0 statistical software. The total score was for both sleep quality and physical activity and categorized according to guidelines into categorical variables. The categorical variables were analyzed using chi square statistics to see association. Furthermore, Pearson correlation was to see a correlation in total scores. Descriptive stats used were mean with standard deviation for continuous variables which were total scores of all scales and frequency tables for categorical variables which included demographics and categorical organization of total scores. Pie charts and bar charts were used for graphical representation of results.

The mean difference between higher and low academic achievers for physical activity score showed a mean difference of 10.821+6.354, with minimum score to be 0.00 and maximum to be 25, while median percentile found to be 10.50. It showed a non-significant difference (p value 0.248). The results out of total students 230 showed regarding gender distribution that there were 233 females and 7 males. The results showed out of total 230 that there were 14 students belonging to 1st year, 21 to 2nd year, 22 to 3rd year, 55 to 4th year and 118 to final year. 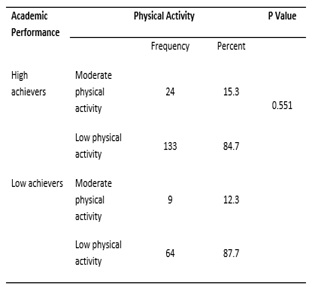 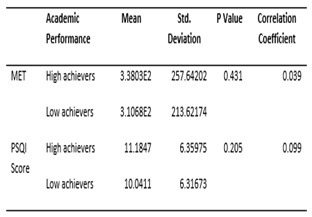 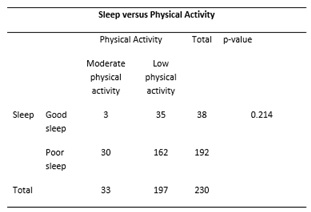 The findings of current study were compared with previous literature which were conducted with similar objective. In comparison to our study which showed that sleep quality and physical activity are irrespective to academic performance, previous findings suggested that longer sleep duration was statistically significantly associated with decreased risk for overweight and obesity independent of other sleep characteristics (OR = 0.82, 95% CI: 0.73, 0.91). Longer sleep duration was also associated with better diet quality and higher levels of physical activity15.

A study conducted in 2018 showed that students with good grades had higher levels of physical activity and concentration in class with p value <0.001 whereas the results of our study showed negative correlation between physical activity and academic performance. Our study proved that students with poor sleep quality and sedentary lifestyle did not have any negative impact on their performance as compared to previous studies that showed students who had poor sleep quality and were sedentary did not get good grades16,17.

In contrary to the findings of our study, a study showed a strong association between gender and physical activity. The study suggested that male gender is associated with higher physical activity because they were exposed to more outdoor activities than females but our study showed opposite results as the female participants in our study were more physically active than males. However, there was not a significant difference8,18,19.

In comparison to our study, an Australian study suggested that females are predisposed to poor sleep quality than men. The study revealed that females even with longer sleep durations had poor sleep quality while men had efficient sleep with shorter durations. The study was statistically significant with p value<0.05. Whereas the results of our studies did not show any significant difference regarding sleep duration in both genders20,22.

Some previous studies showed that poor sleep quality in students is because of insomnia and depression because students are predisposed to stress. The result of the study showed high PA was insignificantly negatively associated with anxiety, depression, psychopathological symptoms and poor sleep. Low PA and high ST were independently and interactively associated with increased risks of mental health problems and poor sleep quality (p<0.05). However, the results of our study when compared to that study is completely different as students who had poor sleep quality because of academic stress still scored better23,24.

Other studies have more detailed statistical calculation. In order to see the depth and action of association between academic score for physical activity and sleep quality multi linear regression models have been used. However, the result of the study showed that there is no association between sleep quality with p value 0.232 and physical activity with p value 0.996 with academic performance whereas previous literature showed significant correlation between these three variables, when compared to our study25-27.