Fibromyalgia is a complex disorder causing issues in musculoskeletal system, and interlinked with depression. The purpose of this research was to find out the association of depression in patients with diagnosed fibromyalgia in Lahore and Sargodha. To check the areas of body mostly affected with fibromyalgia and to find the depression as the risk factor for fibromyalgia.

Overall incidence reported in patients of fibromyalgia were 11.5% with mild depression, 19.5% with moderate depression and 69% were the patients with severe depression.

The results of this study revealed that depression was the most common cause for developing fibromyalgia syndrome. Musculoskeletal symptoms were more common in males and females. Most common sites of developing tender points were neck, shoulder and upper back.

[Tahir A, Fatima A, Khan MT. Association of Depression in Patients with Fibromyalgia Syndrome

In FMS there are total 18 tender points all over the body, tender points are those sensitive points which are painful to touch. They are formed mostly near neck, around shoulders and all along the spine. They can be on chest, arm, hip or above and below the waist7.

In general population, prevalence is about 2-4% and Berger et al concluded that patients having FMS had a greater rate of anxiety and depression disorder as compared to those without FMS7,8. But its etiology still remains unclear 9. Women are more likely to affected to FMS as compared to male but both genders can get the disease2. In addition, several investigations have discovered that it immensely influence the norms of life of the people who suffer this disorder10,11.FM is also complex disease overlapping the symptoms of chronic fatigue syndrome12.

Depressive disorders do not just affect someone’s life but also have influence on their social and economic lifestyle. They have elevated risks for greater range of health issues that last longer13. The level of emotional dysregulation is also higher among fibromyalgia patients11.The symptoms of fibromyalgia are currently unmanageable with any current treatment recommendations14.

Research suggests that being more mindful leads to fewer pain interference symptoms, decreased depressive distress and a better quality of sleep17.According to another study, FM sufferers experienced impaired functional performance compared to those who did not have the disorder, than the participants showing an adverse relationship between pain severity and gait and balance measurements according to the study18.

There have been reports of behavioral patterns focusing on extremely high self-expectations and self-criticism. Self-criticism has been linked to severe symptom severity in chronic pain sufferers in previous research. Rage, particularly inward-directed anger, has been shown to intensify previous pain and worsen depression symptoms19.

In 2015, Meng-Han Chang et al carried out a study on two-way connection between depression and FMS. They use lengthwise study design. After going through all the process they deduced that patients of fibromyalgia were most likely to experience depression and patients of depressive disorder had high risk of getting the fibromyalgia4.

In 2018, Andrew Seto et al analyzed relationship among character, fibromyalgia effect, and wellbeing related results in patients with fibromyalgia. Cross sectional study design was used by them. They concluded from their study that personality have its effects on fibromyalgia. If someone already have low esteemed personality gets the disease due to any reason, he fails to cope up the symptoms. And if one is energetic or motivated, gets the disease he will cope up the symptoms with his will20.

Most of the people are suffering from this disease fibromyalgia and associated signs and symptoms of depression, anxiety and other psychological factors21. As things stand, fatigue appears to be one of the most disabling symptoms, preventing daily work performance as well as structured physical activity. Inability to perform work or daily duties, a lack of knowledge of the symptoms, a sense of impairment, negative effects on interpersonal relationships, loneliness, social exclusion, and difficulty regulating various symptoms all contribute to a decline in quality of life. This results in a considerable deterioration of physical and mental health, which worsens the severity of the disease and its associated symptoms in FM patients22.

A study was conducted in turkey to evaluate function of smell and taste in patients with fibromyalgia syndrome and its relation with depression and anxiety in 2021 by Tuğba ÖZSOY-ÜNÜBOL. FMS is associated with anxiety and depression. The olfactory and gustatory capabilities of patients with FMS were impaired, and these deficits were linked to anxiety and depression. More research with bigger sample sizes, as well as functional magnetic resonance imaging examination, is needed23.

A study was conducted in 2021 reporting differences between Portuguese and Brazilian Patients with Fibromyalgia Syndrome: Exploring the Associations across Age, Time of Diagnosis, and Fatigue-Related Symptoms. They concluded that different cultures have different perception of symptoms of fibromyalgia syndrome. Patients having these symptoms were not able to work day to day and some were having feeling of disability and fatigue related issues. Overall, there are signiﬁcant differences in fatigue symptoms between Portuguese and Brazilian women with FM, suggesting that cultural and geographical differences should be considered when describing fatigue-related symptoms in women with FM24.

Depression (major depressive disorder) is a common and serious medical illness that negatively affects how you feel, the way you think and how you act. Fortunately, it is also treatable. It can lead to a variety of emotional and physical problems and can decrease a person’s ability to function at work and at home4.

This cross sectional study was conducted on 87 fibromyalgic patients. For the collection of data, 2 questionnaires was used for the investigating the symptoms of fibromyalgia. 2 questionnaires was used for this study, first was 2010 Fibromyalgia Diagnostic Criteria, formulated by the American College of Rheumatology (ACR), which comprises of 2 sections WPI (widespread pain index) and SSS (symptom severity sclae) score and second was Zung Self Rating Depression Scale which include 20 questions, with each item rated on a 4-point scale. It requires approximately 5–10 minutes to complete. Ranges for mild to moderate depression, moderate to severe depression, and severe depression are 50–59, 60–69, and over 70, respectively . The sample size was calculated using non-probibility convenient sampling technique. Written consent was taken from the hospitals of Lahore.

Data was collected from hospitals of Lahore and Sargodha.

Completed within 6 months after the approval of synopsis.

Sample size of 87 cases is calculated with 95% confidence level, by using Epitool.

The statistical results, their explanations, graphs, tables, and frequencies of the factors included in this study were all included in this chapter. This study explored the association of depression in patients with fibromyalgia syndrome. 87 subjects (both gender) were screened in this research and all of them were included. The patients of fibromyalgia were examined to check its association with depression. 16% were the subjects whose WPI score was <7 and 83% were those with WPI >7 score. The symptom severity of fibromyalgia patients was scored as 1.1% with SSS <5 and 98.9% with SSS >5.

TALE I: Descriptive statistics of areas of pain or tenderness in body due to fibromyalgia 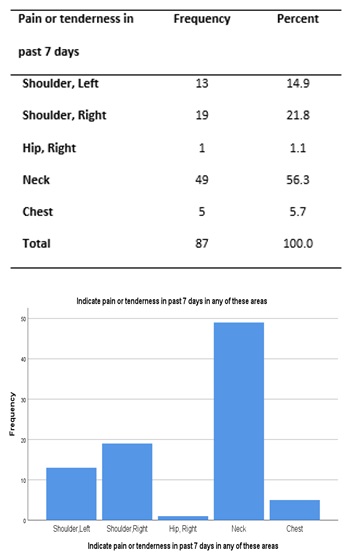 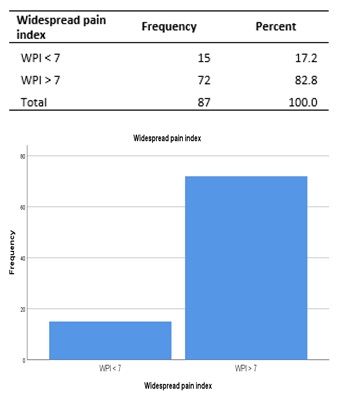 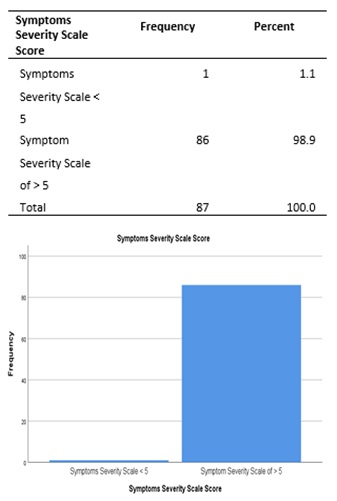 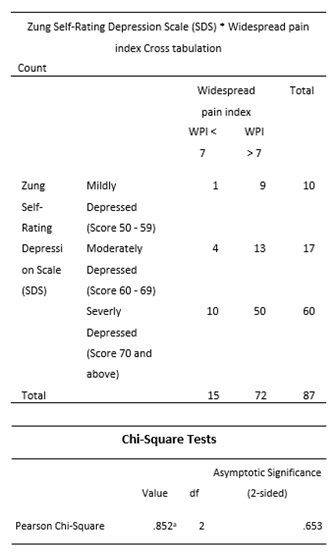 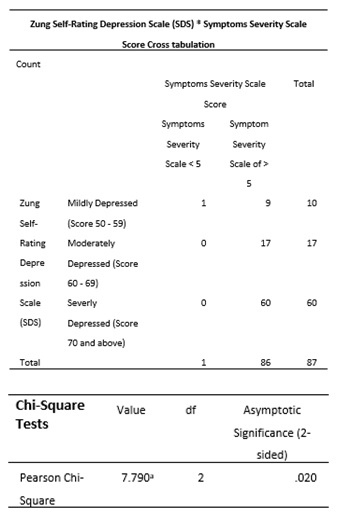 My goal was to determine if depression is associated with fibromyalgia syndrome in the current study. Patients met the criteria for fibromyalgia only if their WPI >7 and SSS >5 score were calculated. I visited many hospitals and choose those patients who met this criteria for this study and then checked depression rate in those patients. For checking depression in these patients, I picked Zung Self Rating Depression Scale and made the questionnaire filled by patients. The results were satisfying because majority of patients report severe depression. 11.5% patients report mild depression, 19.5% with moderate depression and 69.0% with severe depression.

In my study, results strongly showing that patients with fibromyalgia syndrome were facing from severe depression. I also determine the areas of body which greatly affected by this syndrome.  Most common sites of developing tender points were neck, shoulder and upper back and this was seen greatly in females than men.

Patients with FMS are 4.3 times more likely to develop crucial depressive disorders, according to Maletic V et al. The study by Selen Is k-Ulusoy et al determined which FM patients might be at risk for depression and anxiety disorders based on their affective temperament. The Hospital Anxiety and Depression Scale (HADS) was used to determine anxiety and depression levels in patients and Fibromyalgia Criteria and Severity Scales and the Fibromyalgia Impact Questionnaire (FIQ) was used to determine severity 8.

There was about a six fold increase in the number of FM patients meeting post-traumatic stress disorder criteria. According to the few studies published so far, PTSD is common in FM, ranging between 45% and 57%. A study found that PTSD was associated with low sensitivity to acute pain, but PTSD has also been associated with higher levels of chronic pain, including FM25.

Using the presented facts, we could conclude that depression and FMS are related. FMS is more likely to occur in people who have depression later in life. There is a wide variety of classification criteria used to classify fibromyalgia. A higher percentage of men meet the modified 2010 criteria, as well as the prevalence is higher26.

The effects of this condition on a person’s life can be devastating on their own. FMS patients are more likely to suffer from serious depressions and bipolar disorders, resulting in a worse quality of life. The great susceptibility to prolonged stress that this condition entails appears to be one of the sources of this link. The clinician must interpret the suffering of persons with FMS in the proper context and with dignity27.

Findings of this study showed depression was the most common factor linked to fibromyalgia. Symptoms were more common in both gender male and females. Most common sites of tendon points were neck, upper back and shoulder.

I would like to thank my supervisor Dr. Arooj Fatima and my colleague Muhammad Tahir for helping me throughout my research work and helping me in data collection and in preparing this article.