A cross-sectional study was conducted on bankers of Karachi over a period of 6 months. 200 participants were recruited from one of the reputed public sector banks of Karachi for the observational study. Another group of 200 members was taken from different private banks of Karachi. Convenience, sampling technique was chosen for data collection by using self-administered Questionnaire. Data entry was done on SPSS Version 20. Mean is calculated by using One sample T-test and considered significant at p value <0.05. In addition, the frequencies and percentages were taken as descriptive statistics for categorical variables.

Our result shows that private sector bankers are more vigilant about their health and posture as compared to the public sector. The above result appears to be useful indicators of determining the risk of musculoskeletal problems among bankers.

Workstation design can have a large impact on health1,2. Uphill struggle are being made to endorse an environment in which physical condition and safety of employ should be given key significance3. Ergonomics is considered as the discipline to optimize the association between environment and the person4 where the concern to assemble things at the workstation. The competency of the employer is directly related to the ergonomics3,5. The application to design a place of work as personnel, use of tools and the overall situation is called ergonomic design 6-10. It focuses on the compatibility of objects and environment with the humans using them7. Globally the number of people suffering from musculoskeletal conditions has increased by 25% over the past decade and these conditions makeup 2% of the global disease burden. It emerges as an issue since many of these musculoskeletal conditions are common computer related injuries3. According to Osborne, “good ergonomic design in the work place offers a mean to victory over the oppressive forces that continue to make work less productive, unpleasant, uncomfortable and unsafe” 9. The principles of ergonomic design can be applied to everyday objects and work spaces. A high-quality ergonomic contributes to reduction of expenditure due to preventable health problems by improving potential of workers 3,7,11-21. This also benefits the employer by increasing the quality of life3. There is an acquaintance between health of an employ and work station ergonomics3.With the encroachment in technology people have become more approaching towards the use of computer not only for learning purpose but also for resarches3. Previous studies show that while using computers prolong sitting postures in combination with poor workstation ergonomics was significantly attributable to development of musculoskeletal symptoms11.

According to Propionates repetitive movements and static loads due to constrained working postures cause musculoskeletal injuries, computer used might be more strongly related to disorders of hands and arms than to neck and shoulder7. Ariens et al. showed a significant positive correlation between the percentage of working hours in a sitting positions and neck pain among office workers13. However, in both of the above studies, a significant decrease in work related musculoskeletal disorders has been observed when workers were given flexible work environment with ergonomics.

A cross sectional study by Punnett L ergonomic stressor and upper extremity musculoskeletal disorders in automotive manufacturing shows that wrist hand disorders were all associated with exposure to physical ergonomic stressor in the subjects usual jobs14. Sustained sitting posture during computer used in combination with poor workstation ergonomics was significantly attributable to development of musculoskeletal symptoms15. A study conducted in 1996 by US department of health and human services estimated that 7% of US men and 9%of women experienced some form of computer related musculoskeletal disorders16. A study by Yu and Wong reported that 31% of bank employs complained about back pain annually17. From the above mention researches, it may be concluded that assessment and intervention of ergonomics result in improve outcomes of office workers.

Although a number of studies have been conducted before on knowledge and practice of ergonomics globally, but the comparison between private and public sector bankers had not been studied before. These findings can form a building block for further research and practical ergonomic intervention which can bring economical occupational well-being for individual who are working for prolong period of time.

A cross sectional study was conducted among private and public sector bankers of Karachi. 400 participants were recruited for the study.

A self-administered questionnaire was given to the bankers. Data was collected by taking permission from the branch managers; as well as a verbal consent was taken from the bankers after explaining the objective of the study. The questionnaire assessed their working posture while using computer and physical activities.

Data entry was completed on SPSS Version 20. One sample T test is used to calculate the mean value and considered significant at P value of <0.05. The Frequency and percentages were calculated for categorical data. 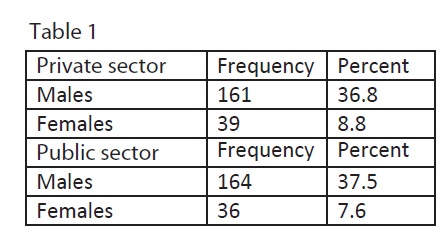 Table 2 shows that 26.1 % of participants were graduates in private sector whereas a higher qualification was being observed in the public sector. However, it shows no association with practice of ergonomics. 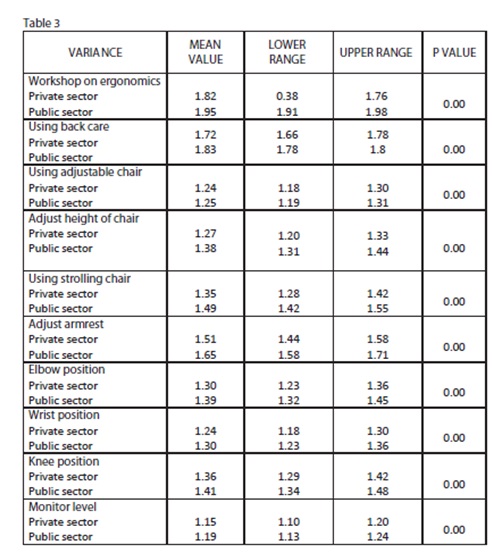 This study demonstrates the importance of ergonomics at workstation. Ergonomics give the impression that it is a subjective key to mounting productivity in the workplace, because its reimbursement often appears to elude health problems. Ergonomically sound workstations can prevent employees from occupational health hazards. Furthermore, it can actually make a business more lucrative through increased efficiency, as well as for making the workplace accessible to a wider variety of workers. An important benefit from implementing ergonomics program in the workplace is to decrease the risk of injury to employees and therefore reduce the health-related cost.

A study by Ketola et al showed that combination of ergonomics education and work station modification provided a positive effect on the symptoms of patient than ergonomics training alone. It helps to improve the physical ergonomics of Visual display terminal VDT workstation21. The National Academy of Sciences has estimated an annual cost of $50 billion due to ergonomic injuries to employees, employers and society as a whole. Setting up an employee’s workstation is simply a matter of placing the employee in one of the neutral postures by arranging their furniture and equipment. Our study shows that 65.1% of private sector bankers used straight posture at work whereas only 34.9% in the public sector. A study by Mc Atamney conducted to assess rapid upper limb assessment (RULA) on sixteen experienced operators (1 male and 15 female, mean age 32.4 years) performed a VDT based data entry task of 40 min in one of two differently design workstation. Each participant performs eight task (four in each posture) shows significant for neck pain22.

Jobs requiring the VDT often depict the workers to awkward and sustain postures. In addition, repetitive activity may have been demonstrated as cause of work-related musculoskeletal problems. To avoid these disorders, knowledge of ergonomics is required to discipline computer users.This study revealed that out of 200 participants of private sector 169 were found to place monitor at their eye level with a mean value (1.15), 162 out of 200 public sector bankers with a mean value of (1.19). Using monitor at their eye level is higher in private sector bankers as compare to public sector bankers. A similar study by the Marcus and Gerr demonstrated the relationship between work related musculoskeletal and VDT use, reported 63% incidence of neck and shoulder symptoms among 416 female office worker using VDT daily in their jobs23. A similar study by Hernandez et al reported an increased incidence of neck, shoulder and hand Work related musculoskeletal disorder in 179 newspaper workers using VDT compared with non-VDT users in the same company24. An increase is mediated by ergonomic factors such as mouse use, seated for prolonged periods, adoption of inadequate or uncomfortable postures, performing certain computer tasks, and psychosocial factors.

An ergonomic assessment and workstation modification proved to reduce the incidence of work-related musculoskeletal disorders in a variety of work settings 18,20. Regarding wrist position while using computer, it was estimated that private sector bankers are habituate to place it in the neutral position.

A randomized control trial study conducted on 6 weeks’ time period by Cook demonstrated that placing the computer mouse closer to the key board and eliminating the numeric key pad results in a low deltoid muscle EMG in VDT users25.

The study shows that private bankers adjust the height of their chair more frequently as compare to the reference group. A study by Rampel et al shows that adding a properly fitted adjustable chair significantly reduces the shoulder and neck pain in seated workers26.

Another study shows that addition of adjustable seats with ergonomics education has been shown to reduce the pain complains in workers whose job required sitting for four hours per day while working at VDT27.

This study was done to scrutinize the practice of ergonomics among private and public sector bankers. The result of the study shows that private sector bankers are more vigilant about their health and physical conditioning. An ergonomics assessment is a cost-effective choice for the initial stages of treatment in the patients with upper extremity dysfunction that may be due to poor work station ergonomics. One must consider if the ergonomically sound working stations are going to be design to the banks, there must be a decline in frequency of occupational health hazards.