This study is conducted at Ziauddin Hospital Out Patient Department. A sample of 200 over weight and obese clients were included by simple random sampling to find out the relation of co-morbidities with overweight and obesity.

Patients were categorized as overweight and obese by calculating their Body Mass Index (BMI).

Out of 200 patients it is was found that there is an increase in secondary complications such as depression, hypertension, stroke, cardiac diseases, knee pain, and kidney disease. The statistics also showed that generally overweight and obese clients had a higher of smoking and alcohol consumption. There is a marked association of co-morbidities conditions within clients with higher BMI than normal.

This study provides a comprehensive estimate of the strong association of co-morbidities attributable to overweight and obesity using standardized and consistent definitions and methodologies. Our findings confirm that high BMI will carry a profound health burden and will have a significant impact on health expenditures.

Overweight and obesity are simply defined as conditions of abnormal or excessive fat accumulation in adipose tissue, to the extent that health may be impaired1. It is a resultant of excess body fat. A standard marker for body content is the body mass index (BMI). There are other parameters to calculate over weight or Obesity such as waist circumference, waist-hip ratio, skinfold, and percent body fat measurements2 BMI: body mass index (BMI) is calculated as: weight (Kg)/Height (m2). In clinical terms, a person with a BMI between 25.0 and 29.9 Kg/m^2 is called over weight and One with a BMI greater than 30 Kg/m^2 is called Obese 3,4.

The excess intake of food results in increase in fat stores which causes increase in body weight. The causes of obesity are complex and poorly understood. Genes also play an important role in determining food intake or energy metabolism along with low activity caused by a sedentary life style. It is evident through previous studies that there is a rapid increase in the prevalence of overweight and obesity during the past 2 to 3 decades 5-12.

Obesity is an epidemic of the 21st century, and is a major causal issue for various other metabolic disorders. According to a worldwide estimation by the World Health Organization (WHO), in 2005 there were about 1.6 billion overweight persons aged 15 years and above and among them at least 400 million adults were obese6. In most of the Asian countries the prevalence of overweight and obesity has increased many folds in the past few decades and the magnitude varies between countries 9-18 South East Asia and Western Pacific region are currently facing an epidemic of diseases associated with obesity such as diabetes and CVD 8.9.

Overweight and obesity represent a rapidly growing threat to the health of populations in an increasing number of countries. Indeed, they are nowadays so frequent that they are replacing more traditional problems such as under nutrition and infectious diseases as the most significant causes of ill-health.

Obesity co-morbidities include coronary heart disease, hypertension and stroke, certain type of cancer, non-insulin-dependent diabetes mellitus, gallbladder disease, dyslipidaemia, osteoarthritis, gout, pulmonary diseases and sleep apnea. In addition, the obese put up with common bias, discrimination, on the part not only of the general public but also of health professionals, and this may make them unenthusiastic to seek out medical assistance. World Health Organization therefore convenes a discussion on obesity to review current epidemiological information, causative factors and related consequences, and this report presents its conclusions and recommendation. In particular, the Consultation measured the system for classifying overweight and obesity based on the BMI, and concluded that a coherent system is now available and should be adopted globally. The discussion also concluded that the fundamental causes of the obesity epidemic are sedentary lifestyles and high-fat energy-dense diet, both resultant from the intense changes taking place in society and the behavioral patterns of communities as a consequence of increased urbanization and industrialization and the disappearance of traditional lifestyles7.

Economic improvement over the last 50 years in most of the countries has resulted in greater affluence and to diets that are higher in fats especially saturated fat, cholesterol, and cultured carbohydrates and low in polyunsaturated fatty acids and dietary fiber. This nutrition trend has also been accompanied with a sedentary lifestyle and increased level of stress. Therefore, the prevalence of obesity and other non-communicable diseases has raised steeply 19, 20.

The nutrition transition can be noticed in all high-income countries in the region (Arab Gulf Countries), and most middle wages countries, especially in urban areas, and in a few high or socioeconomic sectors of poor countries 21-23. Several studies have reported the association of dietary patterns with obesity and central adiposity; most of these came from Western countries. A reduction in fat intake to around 20-25% may be helpful in weight reduction and minimize the risk of energy imbalance and weight gain in sedentary individuals. Although there is strong evidence that certain genes have an influence on body mass and body fat, mostly do not qualify as necessary genes, i.e., genes that to cause obesity when two copies of the defective allele are present; it is likely to be many years before the results of genetic research can be applied to the problem23. Different methods for the treatment of increases BMI are described including dietary management, physical exercises and activities, and anti-obesity drugs, with gastrointestinal surgery being reserved for extreme cases. Overweight and obesity are major cause of co-morbidities which can lead to further morbidity and mortality.

The objective of this study is to assess the relation of co morbidities with overweight and obesity which can be done by survey. The articles obtained from the literature search prospective cohort study of the general population of a Western country (countries in Europe or North America, Australia or New Zealand), significant outcomes, a sample size of at least 200 subjects, and risk estimation based on the incidence of disease instead of the mortality rate of disease 13,15. For large cohorts with several articles meeting the defined criteria, the mostly recent article.

The aim of the study was to determine relation between co-morbidities in clients who are overweight or obese clients coming for physiotherapy in a tertiary care hospital.

It is a Cross sectional study.

The study will be conducted at the Physiotherapy Department of Ziauddin Hospital North Nazimabad and Clifton campus.

200 patients of both genders are included in this study with a global prevalence of 15% to 18% calculated on EPI calculator11.

Simple random sampling is used for this study.

On the basis of BMI all over weight and obese patient coming for physiotherapy treatment were included.

Patients less than 18 years or more than 65 years were not included in this study. 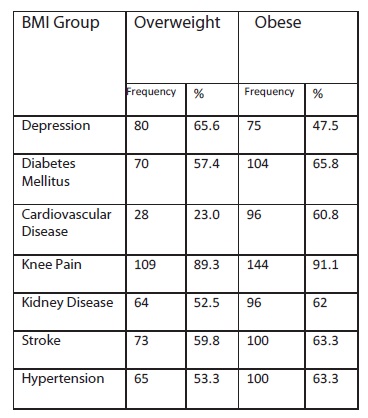 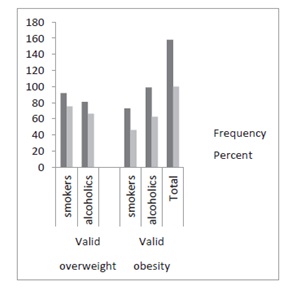 Foy CJ. et al in his study has discussed the association of obesity with a number of comorbid conditions such as type 2 diabetes and knee pain. According to him, the etiology of knee pain is multifactorial, and can range from chronic diseases such as osteoarthritis (OA) to acute trauma but at the same time he mentioned that it is a modifiable risk factor for the development and treatment of knee pain30. Similarly in our study it has been evidently seen that knee pain is a common complaint in obese and overweight individuals. It is a major problem faced by them. Other researches also support this association.

Alcohol and Smoking both are risk factors for many diseases such as hypertension, stroke, heart disease, etc. In this study we came across the fact that the consumption of alcohol and smoking was not commonly seen in normal individual’s compared to the overweight and obese patients. Other diseases like cardiovascular disease, Kidney disease and diabetes mellitus have also been seen in abundance in these patients.

In conclusion, this study provides a comprehensive estimate of the incidence of co-morbidities attributable to overweight and obesity using standardized and consistent definitions and methodologies. Our findings confirm that overweight and obesity carry a profound health burden and will have a significant impact on health expenditures.