A sample of 150 participants were included in this study and equally divided in two groups. Subjects were randomly assigned to receive either SNAG mobilization (n = 75), or a manipulation (n =75).

The SNAG technique was applied at the cervical spinal levels with active flexion in sitting. Manipulation was done by an experienced manual therapist.

The use of manual therapies decreased the pain intensity in the mulligan and the manipulation group; this difference was statistically significant (p-value <0.05).

It was observed that both the techniques have shown positive results but in comparison, mulligan technique is more effective than manipulation.

Cervical pain is not as common as low back pain, is encountered frequently. It is considered one of the most common chronic pain conditions and a major problem in modern society. Côté et al 1, 2 in evaluating neck pain and its related disability, reported that in the Canadian population, the estimated lifetime prevalence of 67%, point prevalence of 22.2% and 14% prevalence of high pain intensity with disability. Croft et al the age and gender standardized annual incidence of neck pain is 14.6%3. In a longitudinal study in the general population, in a sample made up of 7,669 adults aged 18 to 75 years, in the United Kingdom, with no current neck pain, reported a 1-year incidence of estimated cumulative episodic neck pain of 17.9% studies4.

Cervical spinal manipulation (CSM) therapy is a common manual intervention for the neck pain. Manipulation, or a high velocity thrust technique, is one of the treatment tool used by physiotherapists, medical practitioners, chiropractors and others 8,9. They use manipulation for correction of the musculoskeletal disorders of the cervical spine. Mostly, it causes the immediate effect in neck pain, headache, and stiffness during active movement of neck. However, the benefits of cervical spine manipulation (CSM) are yet to be clearly established, whereas the known risk of manipulation is potentially serious 10,11.

There are different ways to perform spinal manipulation. One of the type is high-velocity, low amplitude thrust technique, the goal of which is to provide a “sharp thrust with velocity” to induce a gap in the joint. But numerous complications have been found in cervical spinal manipulation 12-14.

Mobilization technique is one of another modality for physical therapist in acute and chronic neck pain. SNAG’s is an acronym for “sustained natural apophyseal glide” with the technique described as involving the application of an accessory passive glide to the cervical vertebrae while the patient simultaneously performs an active movement 15,16. The direction of the glide is argued to be along the plane of the facet joints and the technique is performed in a weight-bearing position (i.e. sitting, standing).Among the SNAG’s basic principles of clinical management is an immediate reduction or cessation of pain and an increase in range of motion (ROM) 17,18. The objective of the study is to investigate the immediate effect of spinal manipulation in cervical pain with comparison of (SNAGS) mulligan mobilization technique. It was hypothesized that during a 2-6weeks period of intervention, participants with Non-specific neck pain (NSNP) receiving SNAG’s techniques would have less pain and disability with improved function compared to patients given only cervical spinal manipulation.

Study participants who had (NSNP) were included in the study. It is defined as pain of mechanical origin located in the anatomical region of the neck, with or without radiation to the head, trunk or limbs. The inclusion criteria were: aged between 18 and 30 years, neck pain lasting 12 weeks or more, no physical therapy, not currently go under chiropractic care or rehabilitation for the neck area, willingness to adhere to the treatment protocol, and signed informed consent. Participants with concurrent headaches, non-radicular pain in the upper extremities and lower back pain were not excluded if neck pain was the main symptom. The exclusion criteria included neck pain due to a motor vehicle accident, neck surgery, severe osteoarthritis and inflammatory arthritis, neurological, cardiovascular, infectious metabolic and endocrine diseases, pregnancy and any cardinal signs of potential vertebral artery dissection.

Researcher undertook standardized screening regarding major inclusion and exclusion criteria for study participation, performed the preliminary standardized history-taking and physical examination of eligible participants. Radiographs of the cervical spine were ordered when indicated. All preliminary outcome measures were collected the result.

The trial was divided into two groups. Group one was treated using SNAGS technique in which all eligible participants received this treatment technique. The second group treated by the Cervical Spinal Manipulation; participants were randomly selected in both groups. Participants had an equal probability of assignment to any group. No block or stratification strategy was used in the randomization process.

We kept all envelopes in front of the participant she/ he picked up one of them and opened the sealed, opaque envelopes. By this blind randomization method, each participant will be assigned to his/her appropriate group before taking the trial. They remained on the same allocation throughout the entire period if they continued in the trial.

The patients were diagnosed with non-specific Cervical/neckpain by a doctor and recommended to the Physiotherapy departments of Ziauddin Hospital, Karachi.

The primary outcome measure throughout the trial was pain level. Pain was scored with a 10-cm VAS17. The psychometric properties of the VAS have been studied extensively. Function and disability were considered the secondary outcomes in the studywas measured with the Neck Pain Disability Index (NDI)18.

During the symptomatic phase of the trial, all eligible participants received high velocity low amplitude spinal manipulation and with at least 3 years of experience were responsible for treating the study participants. The interventions were standardized beforehand and lastedup to 10 to 15 minutes. Approximately 10 and 15 treatments were provided over a period of 5- to 6-week. Each treatment consisted of a maximum of 4 spinal manipulations to the cervical spine.

This group received a maximum of four mobilization treatment session to the cervical and upper thoracic areas (down to T4 level). They were given 3 treatment sessions per week that lasted up to 10 to 15 minutes and follow up was done after 3weeks and 6 weeks. Three sets of ten repetitions were performed following a test trial for familiarizing the subject with the technique and ensuring optimal comfort. A manual force (according to the therapist’s clinical judgment) was applied and sustained (during active flexion) in a direction argued to be parallel to the cervical facet joints. This was applied by direct palpation via the ulnar border of the therapist’s hand on the relevant spinous process in the manner described by Mulligan. Each SNAG was sustained for a few seconds at the end of range of flexion 19,20.

This group received high velocity low amplitude spinal manipulation maximum of 4 spinal manipulations to the cervical and upper thoracic areas 21-23. They were given three treatment sessions per week that lasted up to10 to 15 minutes and follow up was done after3weeks and 6 weeks. 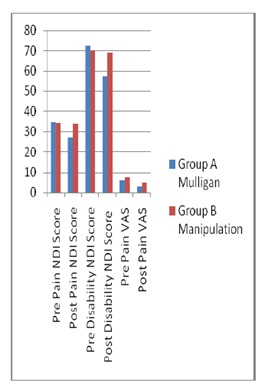 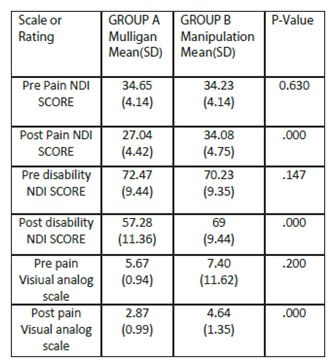 The Levene’s Test for Equality of Variances in the independent samples t-test table shows that the variances of all the variables are statistically insignificant (usually if the value next to “sig.” is less than 0.05). The statistics show that there is a remarkable difference in the mean of all the variables in the study which also supported by the level of significance i.e., is greater than 0.05. Therefore, we reject H0 that an immediate effect of spinal manipulation in cervical pain is equal to the effectiveness of (SNAG’s) mulligan mobilization technique.

Cervical spinal manipulation and mobilization techniques applied frequently in patients with neck pain. The authors of a variety of studies have reported to either the efficacy or less efficiency of manipulation therapy 23-25. Other authors have noted bias in reporting complications of manipulation. 50 Conservative methods of treating cervical pain without manipulation or surgical intervention have been associated with success rates of approximately80% 26,27. One studies showed result that “manipulation of the cervical spine is not to be considered conservative therapy, but rather a most aggressive noninvasive procedure, mulligan technique can be restored from the pain and disability28.” In a recent publication the authors did not recommend cervical manipulation because the risk/benefit ratio did not appear to support the practice29. Hence, this leads to a question that which one of these techniques is better, to answer that we view the mean effectiveness shown in the table 1.1 which shows that the (SNAGS) mulligan technique. The study was conducted to check the immediate treatment effects of spinal manipulation in cervical pain with comparison of (SNAGS) mulligan mobilization technique. It is analysis from the descriptive statistics that mean and standard deviation which shows significant decrease. Mulligan pre pain and post pain also showing significant decrease, that is pre pain and post pain results are 34.65 and 27.04 respectively. Pre and post disability scores (that are 72.47 and 57.28) also show significant decrease in the mean value in both the technique. It has been noted from the statistical analysis that both of the techniques are effective, reducing the pain and to provide relief, while the test of independence shows that Mulligan Technique is yielding better results in providing relief Mobilization technique is more effective then the spinal manipulation in cervical pain.

We are 95% confident that an immediate effect of spinal manipulation in cervical pain is not equal to the effectiveness of (SNAGS) mulligan mobilization technique. But the mean differences show that the both techniques are effective but not equally effective.

We are really thankful to Almighty Allah for granting me wisdom & understanding to add value through learning process. We are very thankful to Miss Jharna Devi for her keen interest & involvement in this study. She was always there to respond to my queries to make this activity truly different. The administrative and supporting staffs of Ziauddin University have also been of great help throughout the course of my research. We wish to express the deepest gratitude to my all-family members who encouraged and helped me to achieve this task. I must profound respect and regards to all of them who always make things easy and smooth.