To determine the awareness and perception of Physical Therapy as a career among the intermediate students of Karachi.

It is a cross-sectional study.

The settings of this study were two Private and two Government sector Intermediate colleges, offering Pre-medical and participants were students studying in these colleges.

The awareness of Physical Therapy as a career among intermediate students would help in creating more effective marketing strategies. Unfortunately, a small percentage of the students are aware of physiotherapy and the services provided by this profession which implies that there is an urgent need for marketing campaign.

A profession is a rewarded occupation, especially one that involves prolonged training and a formal qualification1,2 whereas, a professional is engaged in a specified activity as main paid occupation rather than as an amateur3. Health professionals play a central and critical role in improving access and quality health care for the population. They provide important services that promote health, prevent diseases and bring health care services to individuals, their families and their societies4. Physical therapy, as a health care profession, was formally recognized in the second decade of the 20th century5, after the World War I (1914-1918)6 whereas the profession was endorsed due to numerous emerging cases of poliomyelitis after World War II 7, 8.

World Confederation for Physical Therapy (WCPT) defines Physical Therapy as “A profession which is concerned with identifying and maximizing quality of life and movement potential within the spheres of promotion, prevention, intervention, habilitation and rehabilitation. This encompasses social, psychological, physical and emotional wellbeing9 “.

The profession of Physical Therapy started off as a diploma program progressing to Bachelor and now leading to Master and MPhil programs. It has grown such rapidly that the basic educational process required to become a PT is upgraded to the Doctor of Physical Therapy (DPT) degree. After DPT the need for further advancement in studies emerged realizing the need for equal credentials of old Bachelors in the market with the new graduates coming with the DPT degree. Hence, the Post Professional degree program was introduced11. Similar concerned issues were raised when the mode was to move from Bachelor to the professional Master degree12. The Post-Professional DPT degree permits PT to achieve degree uniformity with PT that holds the skilled DPT degree by filling in any gaps between their skilled baccalaureate academic degree education and current skilled DPT degree education13.

American Physical Therapy Association (APTA) represents more than 80,000 PT, PT assistants, students14 and in U.S. Physical Therapy is ranked fifth in best healthcare jobs and eight in the 100 most excellent jobs in 201315. According to Vision 2020, the new graduates taking the national licensure examination in the field after 2020 will be required to hold at least DPT degree16. PT practice independently of other health care providers and also within interdisciplinary rehabilitation programs17. Clinical specialization opportunities are also available, for PT, in the fields of, Neurology, Orthopedics, Geriatrics, Pediatrics, Women’s Health, Sports and Clinical Electrophysiology18.

A study conducted by Prati and Liu. in October 2006 showed that the students have a positive attitude towards physical therapy. College students also observed the DPT as educating more competent practitioners. However, DPT programs should put in efforts to advocate their programs not only on-campus but also off-campus. DPT programs and APTA should promote more seriously to the public, the changes undergoing in the field of PT19. Board of Intermediate Education Karachi (BIEK) was established in 197420 and certifies students who want to pursue career in physical therapy. Pre-med from BIEK is a requirement for bachelors in physical therapy in Karachi Pakistan21.

Despite Physical Therapy being such a rapidly growing and emerging field there is not much work done to check the awareness of Physical Therapy and thus this study is being conducted as having the knowledge of awareness would help in creating more effective marketing strategies as many of these students could become practitioners as well as patients in future. Also understanding the factors for which the students do not choose Physical Therapy as their first option for career choices, would help in learning the misconceptions regarding the profession that need to be corrected. The objectives of the study are to determine the awareness and perception of Physical Therapy, to compare the frequency of physical therapy as career preference among students of government and private sector colleges and to identify the factors for which students do not choose Physical Therapy as first option for career choices.

This is a cross-sectional survey conducted amongst Intermediate (Pre-medical) students of Karachi.

The settings of this research were two Private (Pvt) and two Government (Govt) sector Intermediate colleges, offering Pre-medical, in Karachi.

The length of study over which it was conducted is one year.

Using Rao soft calculator 22 a sample size of 375 was calculated. The population of intermediate students, in Karachi, in 2011 was 15,52723 and margin error of 5% was kept with a response distribution of 50%. To avoid wasting of data sample size was taken as 400. Non-probability convenience sampling technique was used.

Intermediate (Pre-medial) students, both male and female, from Private and Government colleges of Karachi city, who were present on the day of data collection, were included in this study.

This study excluded students other than Intermediate (Pre-medical) and from colleges out of Karachi. Non responsive students who were not signing the consent form were excluded as well and those students who were mentally disabled were barred from this choice of survey.

A self-administered questionnaire was distributed amongst 400 college students present on the day of data collection. Data was analyzed using SPSS version 20 and Excel 2007. 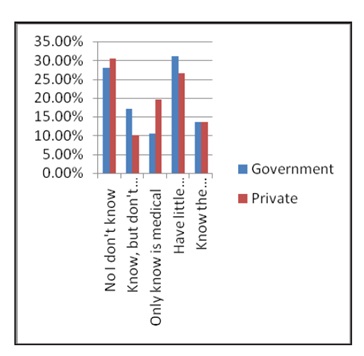 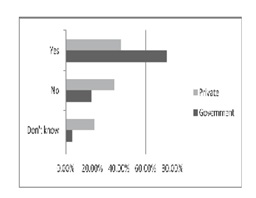 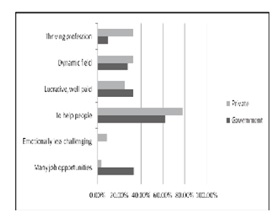 Negative Reasons for Choice of Career Visit to a Physical Therapist Feedback Concerning Their Experience with a Physical Predilection Regarding Visit to a Physical Therapist 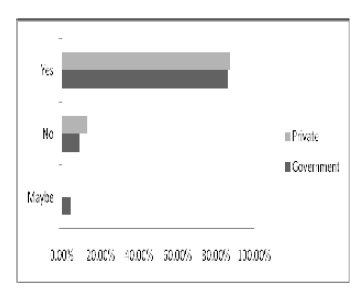 Effectiveness of Physical Therapy as a Treatment 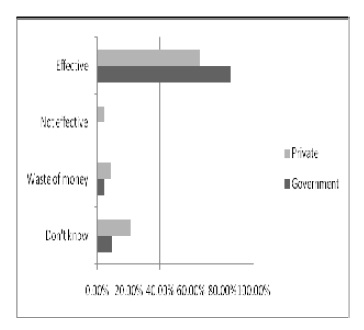 Most Rewarding Fields in Physical Therapy 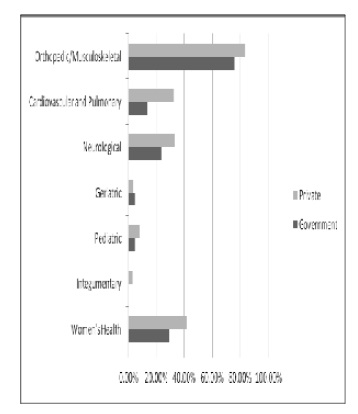 Awareness About Interventions Used by A Physical Therapist 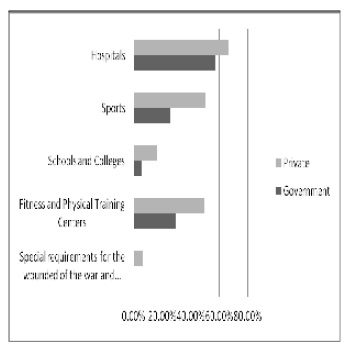 Need of a Physical Therapist 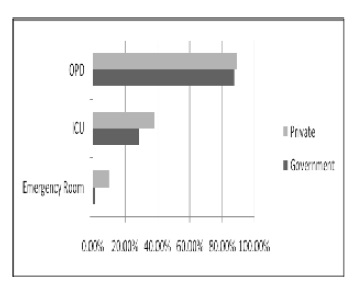 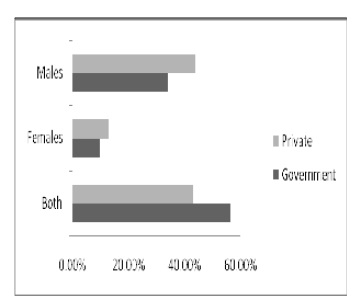 Assessment for Motivation to Visit a Physical Therapist 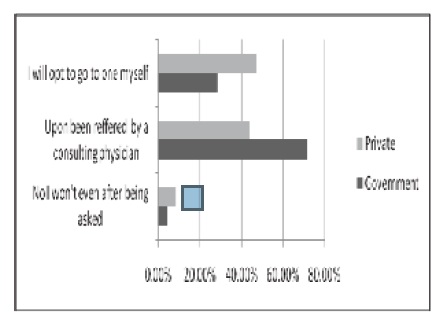 Promotion of Physical Therapy as a Career by Teachers Support by Parents as a Career Choice 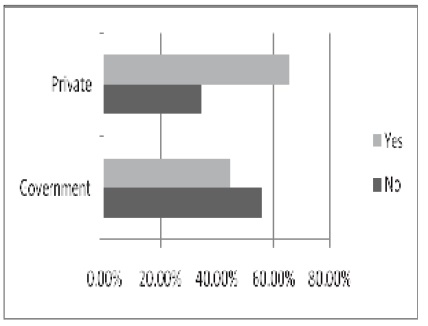 This survey was conducted to evaluate the knowledge and perception of the students, from various private and government colleges, regarding the profession of physical therapy and its practical efficacy.

Promotion of Physical Therapy as a Career by Teachers

Role of a teacher is very important when it comes to the common knowledge and proper guidance about anything. Teachers must council and guide the students about the benefits and advances of physical therapy. Our results shows that private colleges are promoting physical therapy as a healthy profession greatly, this practice should also be carried by the teachers in government sector colleges.

Support by Parents as a Career Choice

Physical therapy is not only under estimated as a profession by students but also by their parents and relatives. PT plays a vital role in rehabilitation of a patient and helps him to revert to the normal aspects of his daily life. Colleges should hold career guidance councils and sessions with parents and children both in order to educate the importance of physical therapy.

Accepted throughout the world, physical therapy, as a cure is not justified when it comes to the common knowledge in our country Pakistan of over 185 million populace27. Only 13.5% of our country here is aware of physiotherapy, which limits it because knowledge brings awareness and belief in the profession as a cure and improvement. Physical therapy is a growing profession; however, it appears that public is unaware of the full range of physiotherapy services, which suggests that there is a need for appropriately focused marketing campaigns.