To determine the prevalence and association of cervicogenic pain and poor sitting posture among the students of Physical Therapy.

A cross sectional survey was conducted among the students through convenient sampling, aged 18 – 30 years. A Structure questionnaire was used to collect the data. Both descriptive and interference statistics were used to analyzed the data.

A cross- sectional study design was selected for this study. Students (n=100) has been selected from the different private and government Physical Therapy institutes of Karachi.

From the sample size (n=100) including students of Physical Therapy, had studying for more than 8 hours. During the analysis of data, it was found that 71% of students were aware about the correct sitting posture and only in 36% of students’ cervicogenic pain is the reason of decrease their activities.

The result of the study shows that the prevalence of cervicogenic pain is higher among the students but poor sitting posture is not consistent reason of pain there were other associated factors too. Maximum numbers of students were aware about the correct posture during sitting for study and using computer. Among entire population ratio of pain was higher in female than male students.

Cervicogenic pain has a high morbidity; next to backache1 which is affecting approximately 70% of general population2 in which females has higher prevalence rate (6.5%) than males (4.2%)3. Previous studies show association between poor postures and musculoskeletal disorders4. Especially among the female5.One of the potential risk factors is posture3 for neck pain in young adults but the identification of persuasive etiology of poor sitting posture and musculoskeletal pain in students is still a query. Countless work has been done in multiple dimensions to recognize the relationship of cervicogenic pain and associated risk factors of soft tissue disorders and structural6 changes includes cervical intervertebral disc, facet joints, atlanto-axial and atlanto-occipital joints and added structure which are capable of transmitting pain7. After spending several hours in different sustain sitting posture, inhabitant students usually perpetuate forward head position in relation to their neck which increases the workload of the cervical muscles. Students assume sort of awkward and steady postures during study hours that are associated with musculoskeletal disorders8. Along with which poorly design seats and working station is a considerable risk factor to increase the work efforts of the muscles around the cervical region. Moreover, poor cervical resting posture stresses the cervical structure by increasing the amount of effort required to balance the head against the forces of gravity9. At present, the students of Physical therapy are using desktop computer and laptop at university as well as at home to consummate their task. The increases in significance of home base computing have grown enormously more from last decade10 due to which different postural factors considered are being the risk of cervicogenic pain in computer users11. However, the students are aware about two important factors to maintain the proper alignment of the body that is correct sitting posture and to take break for a few minutes every 30-60 minutes12. Various researchers suggest that it is necessary for students to take a postural pause for each 45–50 min13 but they are habituate to sit in slouch postures for long hours which eventually increase the work load of the musculoskeletal system. Leon Straker et al14 gave an association between the postural factors, work station setup and musculoskeletal disorders in adult computer users. Cervicogenic pain can be a reason to disrupt the integrity of musculoskeletal system and affect the recreational activities and detoriate the performance of students. It is evident that less than 20% of students can find acceptable chair/desk combinations in classrooms. Most of the students are sitting in chairs with either high or deep seats in the university as well as at home15. This study investigates a relationship and prevalence of poor sitting posture and its association with cervicogenic pain among the students of Physical Therapy. On the other hand, this cross-sectional survey helps to highlight the fact that although the students are aware about the correct posture during sitting but the knowledge implementation and lack of seriousness is missing. The importance of proper ergonomics and duration of sitting is absent during their academic and leisure activities. Moreover, this survey helps to identify the target subgroup population of the students at the risk of cervicogenic pain. No work has been done on such type of epidemic on musculoskeletal discomfort and disorder of students of Physical Therapy in Pakistan.

This is a prospective, observational type of study. A cross-sectional study was conducted to analyze a convenience sample of the students. Each student was regular in the institute and study for at least six to eight hours daily either in front of computer or in regular sessions of class.

100 Physical Therapy students of different institutions were recruited through closed ended questionnaire. Different Physical therapy institutes of Karachi were considered in the data collection process. All the students who agreed to participate and meet the requirements of the inclusion criteria were requested and informed consent were obtained to fill the questionnaire. Basic knowledge about the survey was given to the students before filling the questionnaire. The questionnaire includes the demographic information of the participant, the study hours of sitting postures and nature of the pain. All the students with the history of acute and chronic neck pain were screened to exclude from the study.

A non-probable sampling technique is used by which equal chance of being selected was provided to the student.

– An absence of pervious history of neck pain

The focused population of this study was the students from different private and government institution of Physical Therapy in Karachi. Both male and female students of different professional years of Physical Therapy program were enrolled in the survey. A pilot study was conducted on students to rule out the problems in the questionnaire then permission to collect data was taken from the related Physical Therapy institutions. The first 15 participants were approach for pilot study. These 15 students were not included in the main study data. The data for the main study was collected for 115 students in total, since 15 students were withdrew their names from the study due to different personal and professional reasons. The data collection procedure began after the approval from the ethical board and it took one year to gather and assemble all the data from the focus population. Close ended questionnaire was used to collect data from the students. The questionnaire was based on the demographic data and the question related to the study hours, habitual posture of sitting while using computer and during study. Basic knowledge required to fill the questionnaire has been discussed with the recruited students and highlighted the importance of the study. An informed consent was taken from the students who meet the requirement of inclusion criteria and rests of the students were excluded from the study. Students were requested to fill the questionnaire with appropriate information for the reliability of the results. The data is collected from different colleges of physical therapy. The identification of the participants was kept confidential by allotting them with a number. Data was entered and analyzed using SPSS version 17. Frequencies and percentages were calculated for qualitative variable to analyze.

All the students (male and female) scanned were between the ages of 18 – 30. The ratio of female students is higher than male and the maximum age of all the student is 30 years Table 1 shows tabulated data of sitting hours, cervicogenic pain and sitting posture. Chi square test is applied to analyze this categorical data. The results shows that there is a relation between the poor sitting posture and cervicogenic pain during long study hours but the tabulated statistic shows that poor sitting posture is not the only reason of cervicogenic pain there are other influencing factors as well. According to the result 40% of students use computer or study for about more than 8 hours; study duration is 0.25± 0.10985 and 42% students use table and chair during study. The mean value of the data is 0.25± 0.11804 and more than 71% of students are aware about the correct sitting posture during academic hours with a mean value of 0.33± 0.326. By using Chi Square test, the net result shows that none of the questions are not significantly satisfying the null hypothesis, that is every given option has the equal opportunity. However, in the analysis it is clear that the results are not representing the fact and are significantly low. 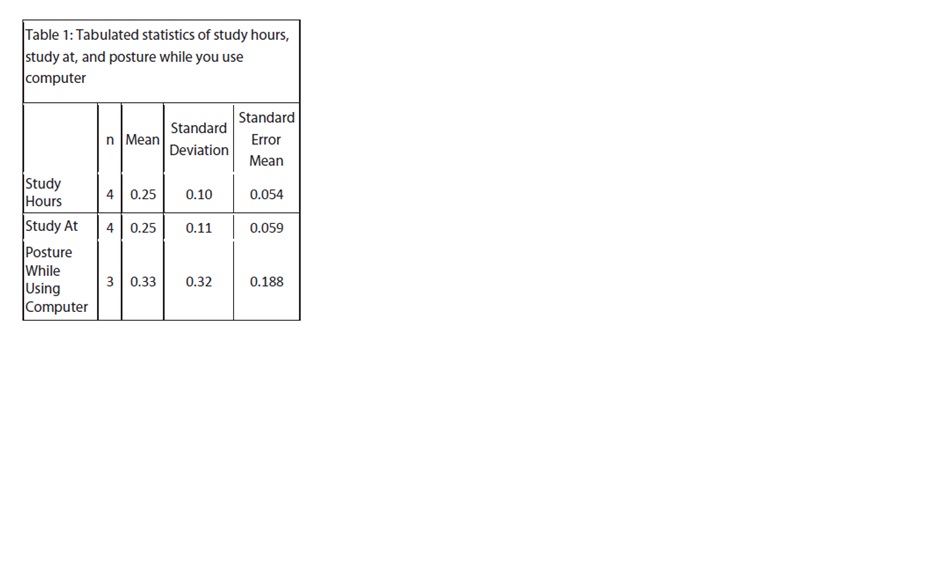 The study was carried out on the students of Physical Therapy to assess the relationship of poor sitting posture and cervicogenic pain through a self-administered questionnaire. The sample population consists of young students (aged between 18 – 30 years) from private and government institution of Physical Therapy in Karachi. From this study, it is evaluated that the prevalence of cervicogenic pain is higher among the students due to poor sitting posture. However, when compared between male and female students it shows that cervicogenic pain prevalence is higher in female then males. A study published in Cephalalgia states that cervical pain is one of the most prevalent musculoskeletal condition in widespread population especially among young adults.16. Form the total population of this study more than 71% of the students were aware about the correct sitting posture and rest of the students were having different opinions. Similar study has been conducted by Stephen et al. Regarding the awareness of good posture among the young adults17. A further work has been conducted which confirms that the correct sitting posture decreases the load over the musculoskeletal system and reduce the incidence of cervicogenic pain among students18. Although, a study shows that almost 25% of young adults were habituate to sit in forward head posture which can be a reason of cervicogenic pain19. A study was conducted among the students in UK that revealed an association between pain and sitting posture with the onset of musculoskeletal discomfort in the cervical region20. The data of this study indicate that an increase in academia demand of computer use has increased postural problems. It was also observed that about 40 % of students spend 8 or more hours for 5 days per week sitting over the desktop computer or laptops. However, similar work done in a study shows that young students spend 8.3 hour21 sitting in front of computer to accomplish their academic task. In another study the researcher mentions that prolong sitting in poor posture can predispose individuals to musculoskeletal pain22. During the academic’s hour students of physical therapy were provided with desktop computers whereas about 42% of the students were always preferred to use desktop computers in their homes to maintain correct sitting posture while rests of the students do not preferred to desktop computers. An author shows that students were more prone to musculoskeletal discomfort that do not seat in correct posture23. Moreover, in further research almost 43% of students seated in slouch posture during studying hours24. During the interpretation of data this was analyzed that 64% of students claimed that cervicogenic pain does not affect their daily activities while rest of the 36% revealed the high intensity of pain. This has directly affected their attendance and class performance. Similar study has been conducted in UK which shows that poor sitting posture in the class rooms can be a considerable risk factor of cervical pain25.

It has been recognized that cervicogenic pain is a common complain of young students. The research showed association between poor sitting posture and cervicogenic pain among the students of physical therapy. However, sustain slouched posture for long period of time have been recognized as a potential risk factor. Other factors like poor design seats and psychosocial stress have considerable association with cervicogenic pain. Besides these all issue like budget, no of samples, inconveniences and unavailability of resources, lack of cooperation, ethical issues in carrying out a research study. During the collection of data, we found several new points which will be included in the future study.