It was a cross sectional study and factors leading towards obesity among school – going children aged 13 – 16 years were analyzed. A total of 300 students were selected from different schools of Karachi through Convenience sampling technique. Data entry was done on SPSS version 20 and frequencies and percentages were taken as descriptive statistics for categorical variables.

300 participants were included in the study where girls were 53.7%and boys were 46.3%. It was found that majority 40% of the children come under the category of normal BMI while 37% were overweight and obese. In addition, 55% of the children had a positive family history of obesity. It was also interesting to find out that 46% students were not participating in any physical activity and 45% schools didn’t even had the PT period in their schedule. Furthermore, 91% students were consuming regularly.

Our study concluded that the major risk factor of obesity in 13-16 years children is lack of physical activity. However, usage of junk food is also increasing in this age group. Furthermore, genetic predisposition cannot be ignored. It was further noticed that most of our children are having less sleep than recommended which itself has a very strong relation with weight gain.

Worldwide childhood obesity is a considerable health problem1,2 and this epidemic is also becoming a challenging issue in developing countries like Pakistan3-5. WHO estimate that out of 1 billion overweight people in the world 300000 are obese6,7. In the past a fat child was considered to be a healthy one but now obesity and over weight in children is major health concern because it may be responsible for many health problems in both childhood and adult hood. Obesity is associated with the onset of many diseases like diabetes mellitus, hypertension, dyslipidemia, polycystic ovarian disease, atherosclerosis1,8- 10 and psychosocial problem 8,11,12. Many studies have shown that obesity may be responsible for the initiation of disease at an earlier stage 6,13,14. Another probable cause of obesity may be the genetic factor and life style15. A major problem which has been identified presently, is the conversion of active life style to sedentary life style, which itself is responsible in great majority for the incidence of obesity. Like outdoor games are replaced by computer and TV, junk food has become a fashion and a way of delight8.

A lot of work has been done on childhood obesity worldwide and in Pakistan. Recently, in 2012 a survey was conducted in Karachi children to determine the time given to physical activities in a day by these children the survey revealed that most of the children were spending only half an hour in physical activities among which the majority was boys16. According to the recommendation for the Asia pacific population B.M.I, greater than 23 will be considered as overweight whereas B.M.I, greater than 25 will be taken as obese rather than a usual B.M.I reference. In recent study using Indo-Asian specific cutoff values it is shown that quarter of Pakistan population would be counted as overweight and obese. Girls aged between 13-14 years spend most of their time in watching TV as compared to boys therefore are more prone to develop obesity16. In another study taking the B.M.I greater than 25 as obese14 the prevalence of obesity was found to be 18 percent in adolescence which coincides with the figure in the west6. National health survey of Pakistan 1990-94 and the Karachi survey 2004-05 reported prevalence of overweight in urban school children to be 3% and 5.7% respectively3. One of the major reasons of overweight and obesity in school going children was due to decline in physical activity16.

Obesity is hard to reverse once established17-19. The risk of childhood overweight will continue into adolescence and adulthood. Having huge burden of obesity in the people in near future will be difficult to tackle. Timely preventive measures in children and adolescence will be sound and effective way of dealing with problem of obesity. School is the place where children spend half of the day therefore; teaching about the changes in lifestyle and including regular physical activity in the curriculum can be one of the benefits that can be reaped through this intervention. Family environment and parental characteristics such as parental working status sibling, person living in the child room etc. must be considered in designing the strategies and intervention as it has strong influence on childhood obesity3. This study is focused to identify the various risk factors leading to overweight and obesity and to evaluate the role of Physical therapist in health education in schools.

A cross sectional survey was conducted in school going school going children aged 13-16 years studying in different schools of Karachi. A total of 300 students were selected through convenience sampling technique. Duration of study was one year. Data was collected by first taking permission from the head of the selected schools. Written Parental permission was taken from the selected students after explaining the objectives of the study. On the day of data collection all those students who were allowed by their parents to participate in the study and were present were assessed for height and weight measurement through calibrated weighing scale and height chart. BMI was calculated by using the standard formula of wt in kg/height in meter square. A self-administered questionnaire in both English and Urdu was given to the students. The questionnaire assessed them about their routine activities, type of diet they are taking, number of meals/days, type of exercises they do, about physical activity in their schools and engagement in any sports activity. They were further asked about family history of obesity and their perceptions regarding the risk factors of obesity.

Data entry and analysis was done on SPSS version 20. Descriptive statistics were taken out for categorical variables in the form of percentages and frequencies.

A total of 300 participants were included in the study where number of girls and boys were almost equal (male=46.3 5% and female=53.7%). The children were incorporated from the schools in Karachi, aged between 13-16 years from different areas. At the time of recruitment, a questioner was given to children for the assessment of factors leading to obesity. The height and weight of the individuals were taken to calculate the B.M.I. An awareness session for health and obesity was also incorporated and for that brochures were distributed among children. 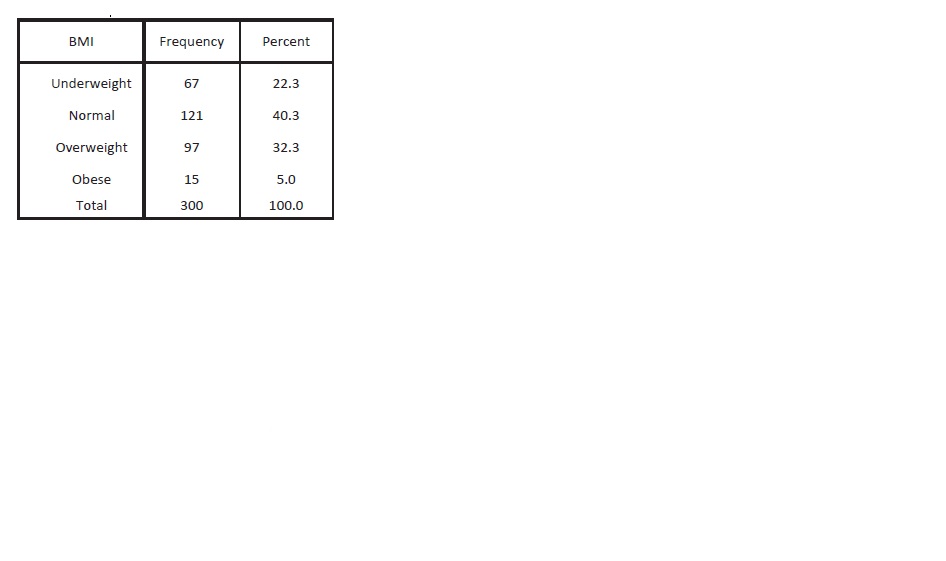 It was found that majority 40% of the children come under the category of normal BMI while 32% were overweight, 22% were underweight and only 5% were found to be obese. 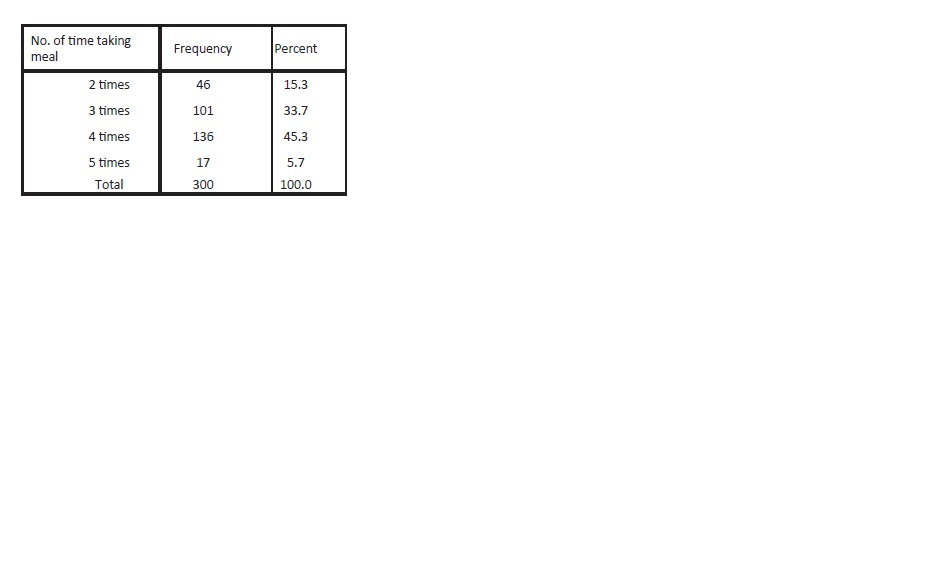 On a question regarding the fast-food consumption 40% children responded as occasionally, 30% stated rarely and 21.7% gave positive response for having fast food. Only 8% responded in negation. 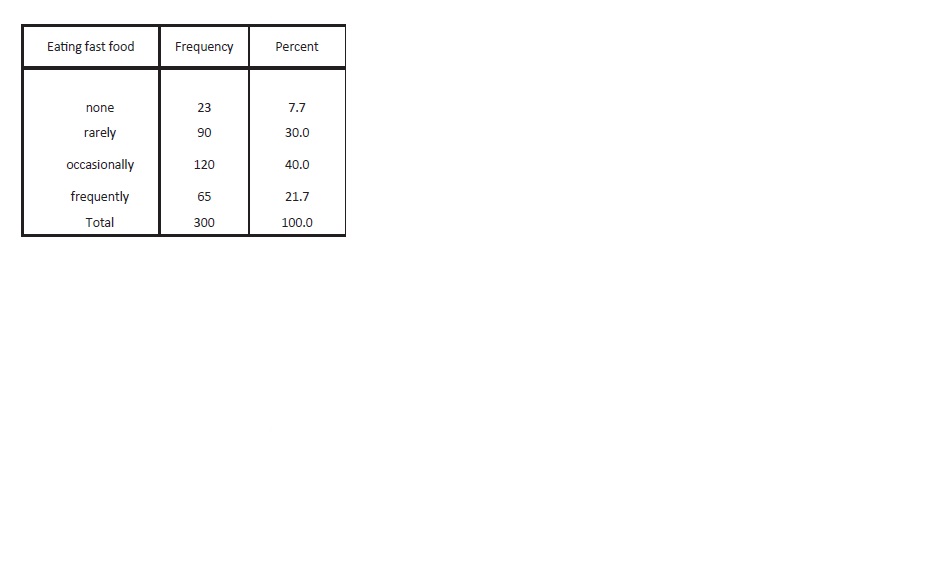 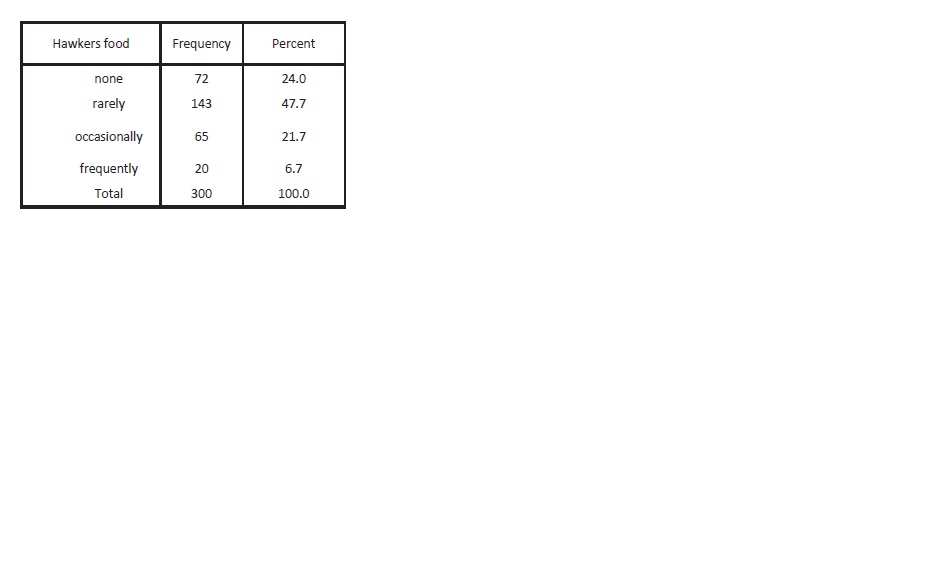 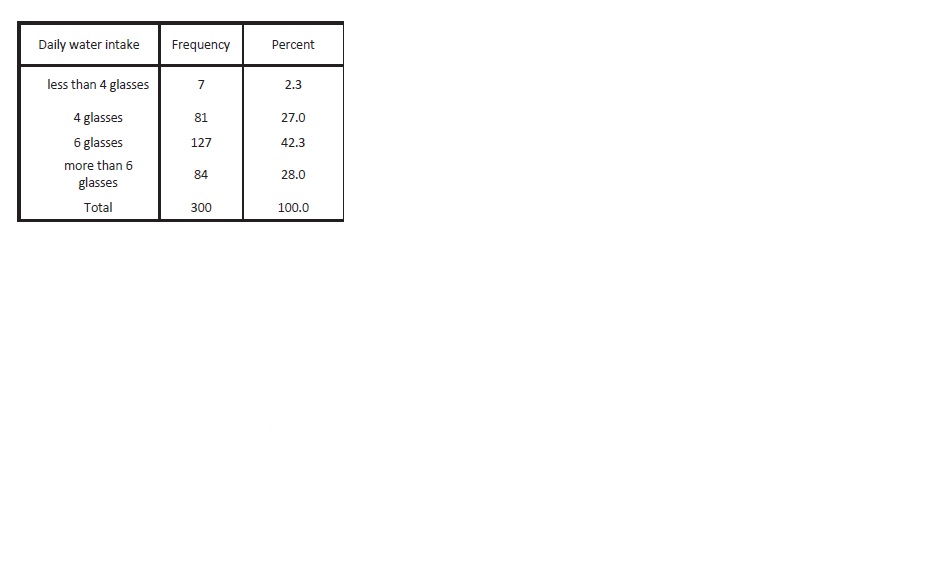 When inquired about physical training period 53% of children have PT session, while other doesn’t have physical therapy sessions in their time table. 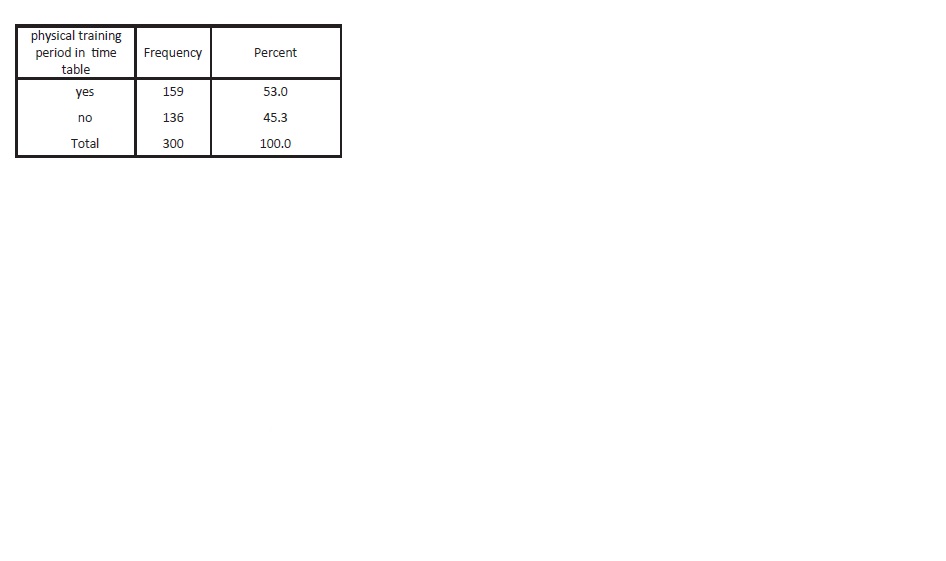 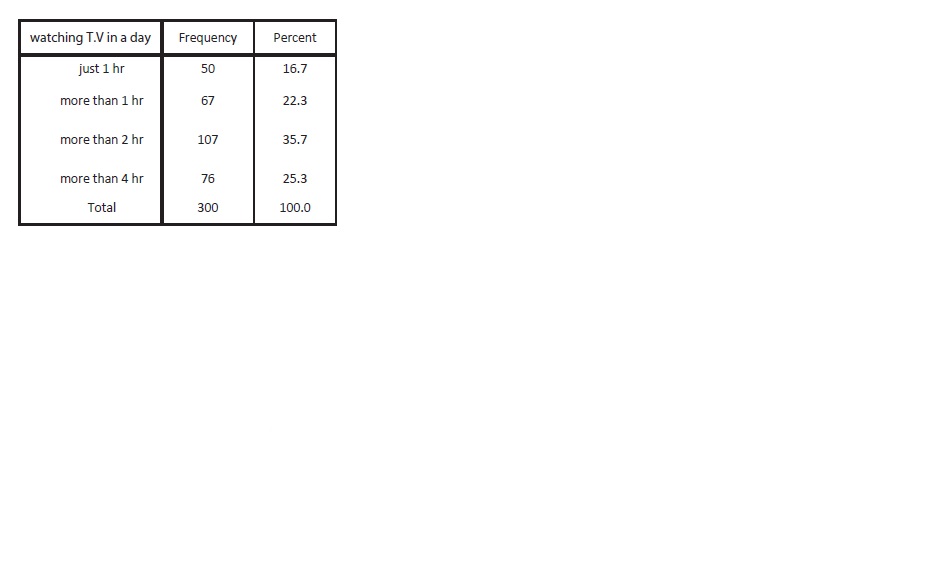 It was observed that 55% of the children have the positive family history of obesity, while 45% did not have obesity in their family. 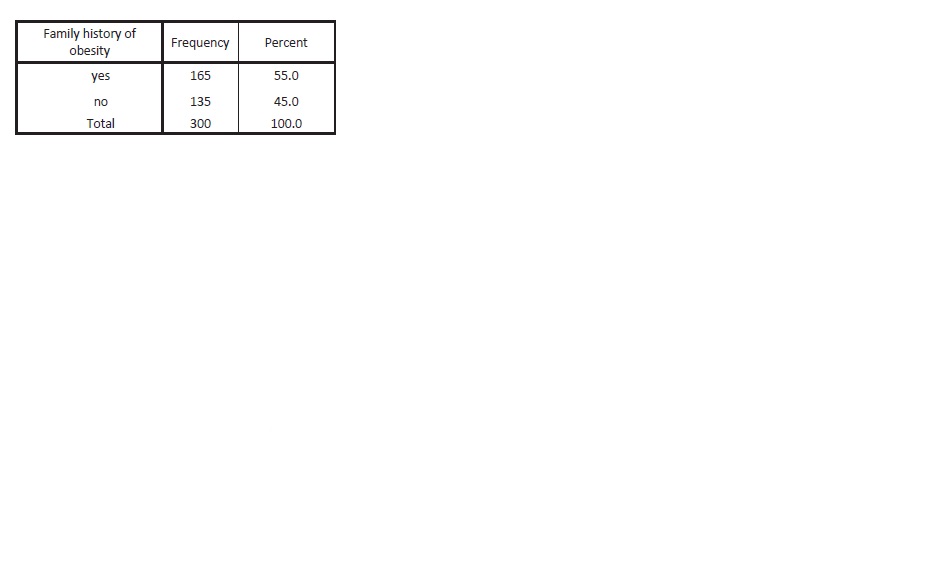 When enquired about perception of why children tend to get obese, 51% children regarded lack of physical activity as major cause of obesity while 48% considered improper diet. In others opinion family history (41%), improper sleep and medications were also the reasons for getting obesity. 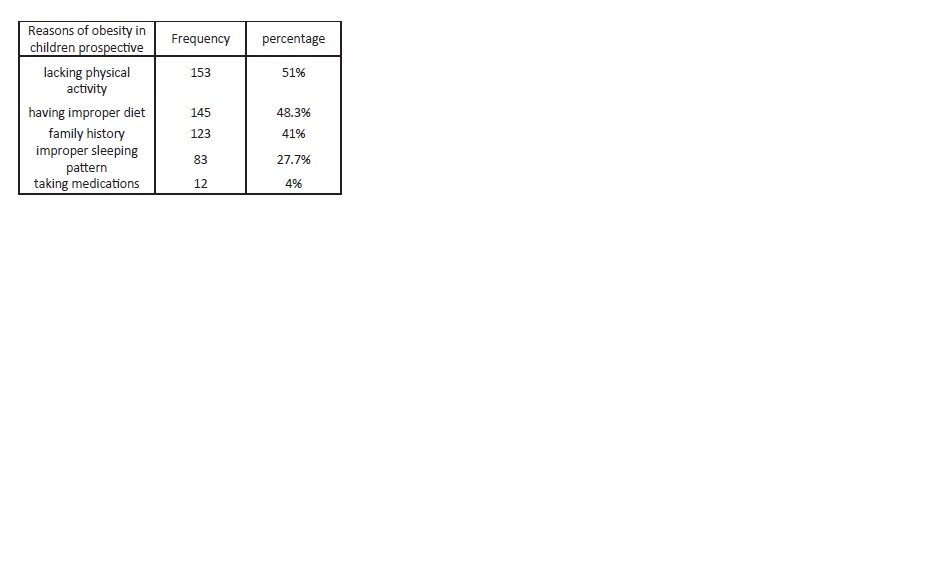 On a question regarding physical activity participation 54% responded as yes, among which 43% were involved in different sports and 13% performed different exercises. 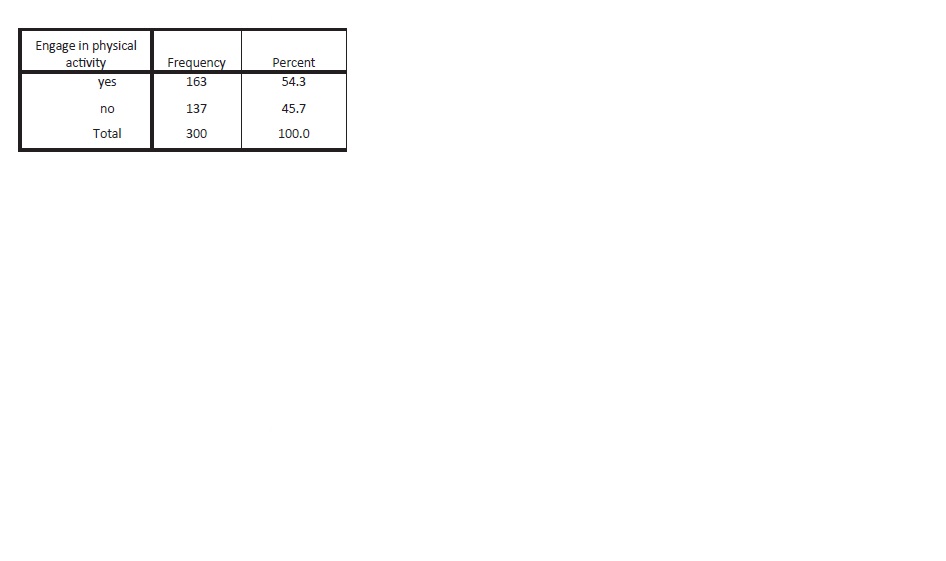 It is well known that obesity and overweight are associated with many risk factors such as improper dietary patterns, family history, physical inactivity and sedentary life style, lack of exercise, watching television or prolonged seated work etc. In the study we conducted, out of 300 children 97 were found to be overweight (32.3%) and 15 were obese (5%). In our study the frequency of overweight children was found to be high, 32.2%, when compared to the similar study conducted in Lahore, Pakistan which revealed 17%20. The recent increase may be due to the increased commercials of fast foods and transformation of active lifestyle to sedentary life style as in west. Even the studies conducted outside Pakistan shows lower incidence of overweight children as shown by the results of research conducted at Monastir where the overweight children ratio was 9.1% and in Tunis where the ratio was 19.7%21,22. The frequency of obesity is however similar to the study in Tunis (5.7%)22.

Regarding junk food consumption our research showed that 40% children have it occasionally whereas a similar study conducted in Karachi in 2008 showed 80% children as junk food consumers23. Our research also revealed that children lack the physical training and 45.3% schools didn’t even had a physical training period as schedule. In addition, it was also observed that 50% of obese boys did not participate in physical activity while 63.6% girls also said that they do not take part in physical activities. A similar study advocated 81% obese boys and 78% obese girls do not affiliate themselves with physical activity24. It is well understood that the major reason for putting on weight is high calorie intake and low output which is reflected in our society as obese and overweight children24 and the reason is evident by the study that now a days we are having high calorie diets (junk food) but less physical workout indicating the lifestyle conversion into sedentary one. Sedentary pattern of life style promotes leisure activities which are unhealthy, such as using computer excessively, playing video games and watching different TV programmes. In return these shows get heavy advertisement adds of candies, snack food and sweetened breakfast cereals that are rich in calories and fats and lower in fiber and nutrients hence influencing children and promoting unhealthy diet pattern. It is also interesting that half of our study population has positive family history Hereditary contributes a major role as shown in several studies like in 2008 a study proclaimed for about 5-40% risk for obesity when parents were obese24. Similarly another study indicated that there is 75% chance that a child will be overweight if both parents are obese and 20-50% chance if only single parent is obese. Another factor contributing to weight gain is sleeplessness; our study revealed that only 13.3% children had 8 or more than 8 hours sleep. This finding is also somewhat close to another study, conducted in the City of Trois-Rivières (Québec) in 200625 which stated 23.1% boy who sleeps 8-10 hours and 20.8% girls were obese and overweight.

Our study concluded that the major risk factor of obesity in 13-16 years children is lack of physical activity. It is also important to see that the usage of junk food is increasing in this age group that may be due to the enormous advertisement of junk stuffs. Another reason is the preference of relaxed/sedentary life style which is causing this problem in this population. Hereditary also plays an important part and our research also revealed that most of our population carries obesity in its genes. One very important finding is about the sleep pattern which has a strong relationship with weight gain.