Perception of pregnant women concerning the role of Physical Therapy in antenatal care with multiple pregnancies.

The study was conducted on 100 pregnant women at three tertiary care hospitals in Karachi.

It was found that these women were well informed about the Physical therapy (76%) but everyone did not practice physiotherapy in their multi-pregnancies.

The results show that the perception and knowledge of women regarding physical therapy exercise during the multiple pregnancies is reasonable.

Health cannot be incorporated many aims to look healthy and happy and to achieve this goal one has to participate in regular physical workouts 1,2. Females are considered to be very conscious and peculiar regarding their looks. It is a reality that a woman does not feel complete without becoming a mother3-5 having said that pregnancy accounts for weight gain and many problems associated with it. A mother not only has to fulfill her daily nutritional requirements but of her fetus as well6,7. It is considered normal when a pregnant female, having a single fetus, gains weight and develops many associated problems but the risk becomes double with a woman having multiple conceptions e.g., twins, triplets or more. Physical therapists are considered as the ideal health professionals acting both as providers and consultants in the areas of specialized exercise programming that can help the pregnant women to cope up with these problems8-10. A comprehensive exercise program provides many benefits, and can improve overall physical fitness and relieve some of the discomforts associated with pregnancy11. An exercise program is assumed to be complete when it comprises of aerobic fitness, muscular fitness and flexibility so that it can improve overall health and body image1. Aerobic exercises help to reduce fat with many other benefits like improving cardiac, respiratory and circulatory systems12-14. For muscular endurance and strength, of pelvic floor muscles, many ways can be chosen of which Kegel exercise are proven to be on the top15,16. These exercises are important part of pre and post-natal exercise routine. Kegel exercises improve muscles controlling urinary flow hence, helps preventing urinary incontinence and helps tightening the loose pelvic muscles after delivery. In addition to these benefits physical activity and exercise also improves overall emotional well-being 17,18.

It is a cross-sectional conducted on 100 Participants who were in their nine months of multiple pregnancies aged 18-40 years were inducted from three tertiary care hospitals of Karachi. The study was completed within duration of 6 months.

The size of n=100 was surveyed at the three tertiary care hospitals.

Females with a multiple pregnancy between the ages of 18-40 years in any trimester were selected for this study.

Females with high-risk pregnancy, any disability or other systemic diseases which could be barrier to exercise were excluded.

A sample size of 100 multi-pregnant women was taken through non-probability convenience sampling. It is a normal practice that clients come to OPD for their treatment sessions so those who had come for their regular ante-natal visits to these hospitals were approached and asked if they would agree to participate in the study. All women who gave their consent and fulfilled the inclusion criteria were requested to participate in the research and were interviewed individually. A major 81.9% of the women, participating in this study, were housewives, 15.5% were working women while 2.7 % were students. A combination of Close ended questionnaire was used for the data collection. The questionnaire required information on their demographic details, exercise history, physiotherapy awareness and physiotherapy exercise sessions attendance. Data analyzed on SPSS software Version17.

A sample of 100 participants was included in the study, of which 78% were housewives, and 22% were working women. The participants were selected on the basis of having multiple pregnancies (twins, triplets or more) in any trimester and between the age of 18-40 (average age of 25 years). Majority of the clients were in their 3rd trimester 43%. The participants were requested to fill out the questionnaire based on information on their demographic details, exercise history, physiotherapy awareness and physiotherapy exercise sessions attendance. 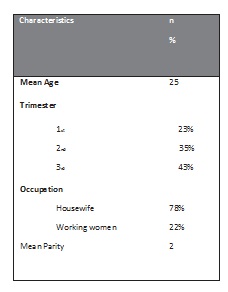 It is shown in table 2 that 74% of women were aware of physical therapy, from which a healthy 57% had received this information through health care units, and 23% through internet/T.V. etc. The results of our study reveal that 60% of the women believed exercises as ante-natal physiotherapy intervention. Only 28% women agreed on the combination of both exercises and electric modalities as a physiotherapy intervention. A small number considered the use of different heating or current producing modalities as a part of physical therapy.

When questioned about referral, 56% participants stated that they were referred to by their gynecologists / consultants to seek antenatal Physiotherapy classes, Out of which 64% attended the sessions regularly and a vast majority of 89% agreed to the benefits of antenatal physiotherapy. A major reason for not receiving ante-natal physiotherapy classes as seen were non-referral from gynecologist and financial constraint, 50% and 34% respectively. In addition, lack of time and lack of interest were also reported by some women. Among those who attended ante-natal sessions 45% were following exercises at home regularly while 54% of them were not.

As shown in table 2, other than having the feeling of tiredness and discomfort, the barriers identified by women for not exercising mainly were lack of time 43% and safety concerns 39%. Women were also inquired about their experience and history of seeking physiotherapy sessions in their previous pregnancies. 59% stated that they had received ante-natal classes, out of which 44% continued performing exercises in their post-natal period and a majority of 96% agreed on the beneficial results achieved by it.

The purpose of this study was to evaluate the perception of multi-pregnant women regarding the role of antenatal physical therapy, (n=100) multi-pregnant women were included having mean age of 25 years with mean parity of two. Women were mostly in their 3rd trimester and majorities of 78% were housewives. As the sample size was small and participants were fairly well educated the findings may therefore not be applicable to other women or settings. The data was derived from women who had previously participated in ante-natal classes in their past pregnancies (59%) and thus may have had adequate knowledge and already may have been motivated to maintain a healthy lifestyle by regular exercises (44%) even in their post-partum period. According to a researcher Symons Downs, most women in their postpartum period believe that exercise controls excess weight gain and the main reason of lack of exercise is found to be shortage of time21. Our study results show that 74% of women were sufficiently informed about physical therapy and the sources of information identified were mainly health care units (57%), and books; internet and family members were also acknowledged. When participants were asked about their perception of ante-natal physiotherapy, 60% responded that it comprises of different types of exercises, aerobics and body stretching and strengthening. Only 28% considered it to be a combination of exercises and application of different electrical current producing modalities. In the current study nearly half (44%) of women were not referred by their health consultants to seek ante-natal physiotherapy sessions. Expecting that obstetricians are somehow hesitant when it comes to advising sedentary women to start exercise during pregnancy, and nearly half recommend exercisers to decrease activity22, 23. In our study of 56 respondents who were advised only (n=36) 64% attended ante-natal physiotherapy sessions, This lack of proper counseling may deprive pregnant women of the general health benefits of exercise and benefits specific to pregnancy, such as the decreased risk of gestational diabetes24. Among the ones who attended, 89% agreed to the potential health benefits and that Physiotherapy has significant role during gestational period. Among the non-attenders, lack of referral, financial constraints and lack of time were the main reasons given. Our study results relate with the findings of Duncombe D13, that regardless the potential health benefits the intensity and execution of exercise declines over the course of pregnancy. The main reasons identified regarding this lack of exercise included being busy, feeling tired or uncomfortable. Particularly in late pregnancy many women stated safety concerns, about the type, intensity and amount of (exercise) providing women a comprehensive care program of exercises during pregnancy that could be made available and carried out at primary healthcare level in the clinics that provide care to these women25. We recommend this particular population to be provided with information on the benefits of practicing simple and regular exercises by controlled walking preceded by body stretching exercises. The cost of this practice is insignificant and promises a return in terms of gestational health and well-being.

Our result revealed that the perception and knowledge of women regarding physical therapy exercise during pregnancy is reasonable; but only a small number of women exercises during pregnancy.