To determine the effectiveness of ultrasound and massage in myofascial trigger point of Tensor fasciae latae muscle in lateral knee pain.

Research was conducted at Outpatient Department of tertiary care hospital.

Patients were taken from the physical therapy OPD of tertiary care hospital by non probability purposive sampling technique. The sample size is (n=44) and equally divided into two groups. Each group (n=22). group A received massage technique and group B received ultrasound therapy. Patient’s pain was evaluated on (VAS) and Global Rating of change scale before and after 3 weeks of treatment.

The results showed that there is no significance difference between the ultrasound therapy and massage technique in regards to the treatment of myofascial trigger point (MTrP) of tensor fasciae latae muscle in lateral knee pain.

Myofascial trigger point (MTrP) is a hypersensitive distinct nodule in a tightly pulled band of skeletal muscle. It can cause referred pain when pressed. Myofascial pain syndrome (MPS) is a common musculoskeletal pain disorder generated by myofascial trigger point (MTrP)1,2. Trigger points on the tensor fasciial lata (TFL) muscle usually causes discomfort on the lateral and front side of the thigh and pain felt inside the knee. In some individual cases it can extend towards the hip and be felt as far down as the calf muscle. Individuals who experience with active tensor fasciae latae tightness and trigger points usually struggle walking with a fast pace initially and in some special cases may cause limping. The trigger point pain in TFL is often wrongly identified with trochanteric bursitis3.

Once the TFL becomes tight and ischemic it can develop myofascial trigger points. Patients suffering from TFL pain usually walk slowly and put their body’s weight on other limb to avoid pain on effected leg but this can create other problems as they are keeping pelvis level biomechanically incorrect which can cause more problems up in the pelvic and lumber areas. Due to active and painful trigger points patients may also experience difficulty in sleeping on the same side as with active trigger points3.

The TFL muscle functions primary during the stance phase of gait to control the pelvic and knees movements. This muscle assists with glutemedius and gluteminimus to stabilize the pelvis and some posterior fibers assist in stabilizing the hip 3,4. Myofascial pain of tensor fasciae latae continue to result in most popular pain complain amongst young and middle age population that require special attention. The Physiotherapy units have implemented various interventions in attempts to provide best treatment in order to ease myofascial pain of tensor fasciae lataemuscles4.

In most cases, these interventions aim to reducing the myofascial pain of TFL, reduce the chances of reoccurrence of pain and advocating the regular exercises5. As a result of the vast diversity in the techniques employed, different researchers have drawn different conclusions as to the effective measures that should be implemented. While some previous studies shown that the effective treatment for TFL pain management can be achieved by ultrasound1, others believe that by using ischemic compression technique with transverse friction massage for myofascial pain points would show a significant improvement in pain management 2,6, while some believe that hydrotherapy best way to treat trigger point7. However, it has been noted that the overall effectiveness of these interventions is more limited and therefore, there is need to conduct more research to identify better strategies8.

Increase the work load in both male and female gender and fast walking, a high percentage of young and middle age people contribute to complain of myofascial tensor fasciae latae pain.

Over the past few decades, studies have revealed that there is need for more research to be conducted to find out better strategies in the management of myofascial pain of tensor fasciae latae9. Therefore, this study aims is providing best treatment for pain management of TFL pain. Moreover, while several studies conducted in the past show that in most cases ultrasound with different intensity exposure. Very few, if any, research studies have assessed the combination of ultrasound and ischemic compression when giving treatment of myofascial trigger points and pain management3,10.

In another research study that was conducted to find weather the primary effects of pain from tensor fasciae latae muscle could be relieved with therapeutic massage by releasing painful trigger points and elongating the TFL muscle, found that both instances of treatments were shown to have an immediate effect on active MTrPs5. According to one study there is no constantly positive method to use for a diagnosis, but trigger point release is the method for treatment used widely11,12.

The study shows that in regards to ischemic compression and activator trigger point therapy, both have an equal and immediate clinically important effect on TFL trigger point pain 13.

Another study looked at ways to reduced MPS symptoms by comparing spray-stretch alone with warming to the spray with stretch therapy and it found that re-warming was more effective that just spray-stretch alone13.In this study two different techniques massage and ultrasound are used and hot pack and stretching are common therapy for both groups.

The basic aim of this project is to answer the following query. Does the comparison of ultrasound and massage therapy for release trigger point provides better and immediate treatment effect in myofascial trigger point pain of Tenser fasciae latae muscles14,15 .

Research was conducted at Physiotherapy Department of tertiary care hospital.

The study was conducted on the 44 patients including male and female with age range 20-35 years. All participants were suffering from myofascial trigger point in tensor fasciae latae muscle. The consent was sought from the subject before participating into the study, the study will approved by the ethics committee of the institution. All patient’s prior to medical history and their detailed history encompassing the information on the complaints systems. Pretreatment patient was analyzing on VAS scale16 and Global Rating of Change (GRC). After 3 week patient were be re-evaluate through the same outcome measure.

Group A treatment option were be massage and in Group B ultrasound were be given ,intensity set at 1.5w/cm2 and duration were be 5 min. Hot pack and stretching were be common therapy for both groups. A treatment session was for 30 minutes, 3 days in a week for 3 weeks. Participants were being re-evaluated after completed 9 sessions.

Data was handled confidentially and subjects were fully informed about the study objectives. Informed consent was taken from each subject, purpose of the study was explained to them and ethical considerations were taken care of all patients.

Sample of 44 patients were included in the study. It was seen that out of 44 randomly selected patients, 15 (34.1%) were male while 29 (65.9%) were female patients. Mean age 29.25yearsSD 3.63 (range 20-35 years)] (Table: 02). Patients were divided into two groups equally. Each group have n=22 patients. Group A was treated by Massage Technique while Group B was treated by Ultrasound Technique. Hot pack and stretching exercises were given to both groups as common therapy and to minimize the biasness. 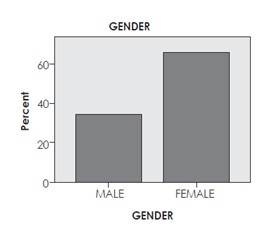 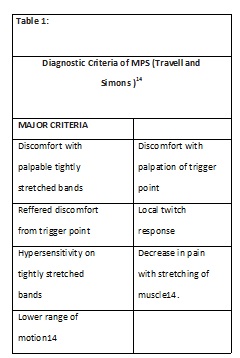 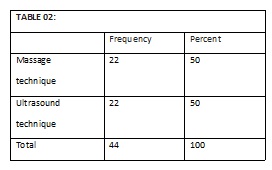 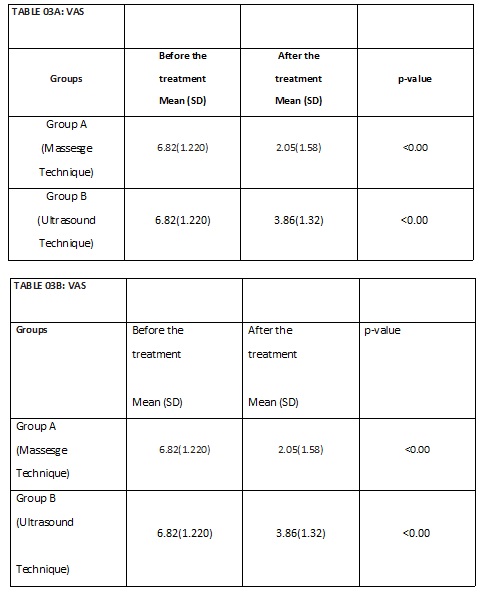 The result demonstrate that there is no significant difference between the Massage technique and Ultrasound technique for the management of myofascial trigger point (MTrP)of tensor fasciae latae muscle in lateral knee pain17,18,19.Thedifference between pre treatment and post treatment has been shown on Visual analogue scale (VAS) and Global Rating of Change (GRC).Stretching of the affected muscle is believed by some authors20,21,22 found the post- isometric relaxation technique to be effective in decreasing trigger point sensitivity and intensity of pain. The technique involved stretching the muscle having the trigger point followed by an isometric contraction against minimal resistance23,24,25.

A limitation of our study is that it may be possible that either the massage ischemic pressure or the ultrasound therapy and sustained stretching produced the results independently. This study could be replicated with one group performing only massage, one group performing only ultrasound therapy, hot pack and stretching should be eliminated for both groups.

Results of ultrasound therapy imaging established that significant tissue abnormalities and morphological changes are correlated with MTrPs. Differences in echo genicity and stiffness of the MTrP related to the surrounding tissue suggest a disruption of normal muscle fiber structure and a and trigger point may be indicative of contraction knots resulting from increased muscle fiber contraction and recruitment, local injury and/or localized areas of ischemia26,27.

The ultrasound techniques given in this research can be used to identify anatomical and physiological abnormalities associated with MTrPs. To identify the abnormalities, and their characterizations, will help to establish the objective, diagnostic criteria, which would be expected to be more reliable, sensitive and specific than only physical examination. By making changes in these objective measures in response to treatment, such as adjustment in the blood flow and/or difference in the size and stiffness of trigger points can be used as outcome of treatment 28.