Sedentary lifestyle has widely increased in people of all ages; in present era due to vast development in science and technology, mostly students prefer indoor activities which negatively influences their health. Sedentary lifestyle is not only a risk factor for non-communicable diseases but it also causes several mental and psychological disorders which negatively affect the academic performance of students.

Observational study and it consists of 178 participants.

Closed ended Questionnaires were distributed among all participants, then the data was entered in SPSS 16 software and results were analyzed

Correlation found between both variables was non-significant. However, physical activity has various helpful effects on mood and other fatal diseases.

Physical activity is defined as any movement performed by skeletal muscles that require energy1. Physical inactivity is the 4th leading mortality risk factor that accounts for 3.2 million deaths worldwide1. Academics are related to education2 whereas achievement is something which is accomplished or have been done through hard work; accomplishment is something that is expressed as a condition keeping in mind the end goal to fulfill something2.

Physical activity and sports are commonly promoted for their constructive effect on children physical health. Furthermore, strenuous exercise among adolescence results in a decline in cardiovascular risk. Moreover, it is also suggested that physical activity has valuable psychological effects on well-being, including health-related quality of life and improved mood states3. It is remarkably believed that by involving in regular physical activity, cognition level and brain function has been improved, which is associated with positive physical and psychological health4. According to Sharon book of fitness and wellness, people having sedentary lifestyle, walk less than 5000 steps in a single day whereas low physical active people are those who take 5000-7499 steps per day5.

Physically active and fit Individuals have a tendency to perform better in academic examinations6. Continuous assessment or examinations are the tools commonly used to measure academic achievements7. The accessible confirmation demonstrates that youngsters who are physically active and fit have a tendency to execute better in classroom so giving time to physical activity does not negatively impact their grades in examinations6.

Physical activity and academic performance shows a constructive relationship with each other8. Whereas, the perception about non-academic activities is that it has negative impact on academic performance9. Physical education and other physical activity programs are significantly important in secular education as budgetary constrained physical education program had been neglected6. Today’s most prevailing issue about health in our children is obesity6. Approximately 25 million children are obese and have low physical activity level which is a contributing factor to the epidemic that accounts for more than one third of kids and adolescence6. Children who have sedentary or inactive life styleduring childhood are at greater risk for developing obesity and cardiovascular diseases in adulthood9. Physical inactivity is an important element which leads obesity in population. Stationary position for long time, for example, continuously watching television, PC use, playing computer games and cell phone usage have to be discouraged10. However, there are some studies addressing this issue that either physical activity have effect or not and these studies have mixed results9. Furthermore, in some cases there is a total decline in school based physical activity program worldwide and time for physical education has been decreased in some educational institutions6.

In kids, there is a positive association between physical activity and cognitive performance11. Improved mind function in addition to its nourishment, higher strength, absorption level, changes in body build, increased confidence and better behavior, and these all leads to improvement in cognitive level in youth that are giving extra time to physical activity8. Regular Physical activity enhance brain functions, likewise, it increases blood flow to cerebral cortex, which results in greater nutrient intake, greater arousal and change in hormonal levels in the body12.

Similarly, associated neuro-hormonal balance which all leads to the improvement in nutritional status and promotes the growth of inter neuronal connection. All these significant improvements are achieved by regular physical activity13. Whereas, there is no positive or negative relation found between physical activity and academic achievement in a study6.

Fit and healthy students perform higher on attention tasks which involve higher cognitive power, it includes goal oriented, self-regulatory process which includes preparation, organization, abstract problem solving, running memory, motor control and inhibitory control14. Physiological mechanisms have proposed the relationship between physical movement, and wellness1. Physical Activity may enhance cerebral blood flow which increases the supply of nutrients such as glucose and oxygen to the cerebrum2. Both acute as well as chronic exercise may influence neurotransmitter levels along with potential effects on memory and psychosomatic state3. Physical Activity may promote angiogenesis in the cerebral cortex 15.

Higher scholastic accomplishment was identified most significantly in those individuals, who are more physically active and have higher levels of wellness8. On several test scores6, students who spent more time in physical activity performed better than those students who spent less time in physical activity. One more study8 showed that physical wellness has more remarkable effect on the test score of science than in reading. Also, they found that females who have higher wellness level exhibited higher scholastic accomplishment than males. In few studies6 positive relationship was found among physical action support and scholastic execution. However, none of these studies surveyed scholarly execution with institutionalized instructive test.

In 2001, more than 200 students of sixth grade were included in a study, in which the results showed that there were no differences of standardized test score existed among the physically active and physically inactive students16. Similarly, in a study conducted on primary school students, same results were found.

In South Eastern Massachusetts, students receiving more than 56 hours of physical education during their school per year showed significant increase in standardized test scores of English and language arts as compared to students who are receiving only 28 hours of physical activity during school year6. The advantages of physical activity are recognized, however, in state funded schools physical training is seen as an extracurricular movement and physical training instructors have encountered many problem at the time when school budget is less or when there is more time required for the studies to enhance test scores than physical training is one of the first thing to be excluded or compromised17.

On the other hand, it proved that physical training has an immediate beneficial outcome on critical instructive areas, for example, reading and arithmetic, it should be accepted that physical training is not extracurricular; maybe, it is a basic segment in the scholarly achievement of understudies17. Furthermore, in United States the data was obtained from almost twelve thousand adolescents to check the correlation between physical teaching or learning and academic performance, their report showed that adolescence who take part in school based physical activity such as physical learning, group activities or sports performance with their parents, achieved 20% more Score in Math’s or English than their sedentary mates6.

Leslee J. et al concluded that improved level of brain activity, perception, body weight, self-esteem, behavioral improvement and improved energy level are thought to have motivated effects towards physical activity. Hence, it leads to improved academic performance8. Social and moral enhancement as well as academic performance of children is significantly improved by the physical activity16. However, huge increment in the scores of arithmetic and perusing among those understudies who were enlisted in physical movement for 70 or more minutes10.

For improvement of academic achievement scores, we must have to add physical active educational lessons which should be cost effective, and does not require extra teacher training time. Furthermore, this must be an enjoyable experience for the teachers as well as for the students18. Youth must have to take part regularly even for an hour in moderate and lively physical activities10.

The correlation among activity level, cognition and school performance is being supported by many literature18. Cognitive ability and school performance in children have appeared to be associated with both fitness and the level of body fats20, 21. Lower academic achievements was related with higher body mass index22. Shepherd has proposed that prolonged physical activity in the middle of the school day may stimulate excitement and diminish fatigue, which can promote prolong focus during classes13. Significant relationships were found among school performance and both activeness and involvement in sports17. The components by which understudies might enhance scholastic accomplishment includes expanded physical action through physical instructions, level of and decreased fatigue, which may rapidly lengthen consideration, scope and fixation17. Longitudinal evaluation of physical tutoring classes, physical action support, and scholastic accomplishment may give more furnished data of their actual Connections23-25. Their examination was aimed to evaluate the effect of physical training, class enlistment and wide-ranging physical movement on academic completion in center school youngsters through the span of a scholarly year17. Students selected in physical training would have increased academic accomplishment over those not enlisted in physical training due to prolonged duration of physical activity among class time17.

However, looking for the link between academic performance and physical activity is the concerned problem and more studies are needed on this subject. Another most important considerable component which is still unresolved is the connection of physical activity and academic achievement with age or gender16. There is a decline in self-esteem, especially in females during adolescence but it is also evident that involving in physical activity; particularity vigorous activities are helpful for some youth to negotiate this difficult period19.

Sample Size and Selection of Sample

Sample size: 178 Sample was selected randomly on the basis of inclusion criteria.

Students enrolled in DPT program aged between 18-25 years. Both genders (Male and Female)

Data was collected through questionnaire which comprised of 13 questions, based on daily physical activities and academic performance of the participating students.

After collecting the data from questionnaire, the data was analyzed to check the correlation of academic performance with physical activity in order to find the relationship between them.

The Research is approved by the Ethical Committee of Ziauddin University. Participant’s demographic information was kept confidential and is only accessed by the authorized personal.

The primary objective of the study was to find the effect of light physical activity on academic performance in university students; 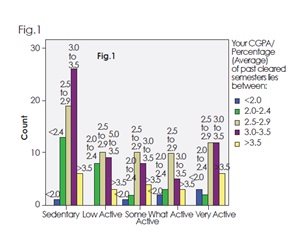 Chi-square test was applied in order to find the co-relation between academic performance and physical activity. The results indicated non-significant relation between these two variables (p=0.42) as shown in table 2. 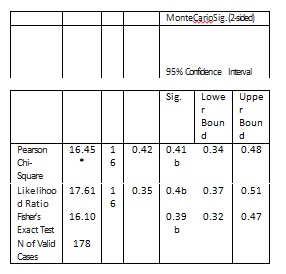 It was seen that in every age group from 18 to 25 years the majority of participants were sedentary in nature, which was also seen in a graphical representation. Importantly most of the students were sedentary in nature. Hence it is an alarming sign for us because sedentary lifestyle is one of the risk factor for obesity which will cause several fatal diseases like hypertension, myocardial infarction, stroke and cancer.

The main aim of the study was to find the effect among activity level and school performance.