Study was conducted at reputed Institute of Physical Therapy and Hospital including students, teachers, staff, and patients with a sample size of thirty participants.

Using single blinded randomization, subjects were allocated into two groups A and B. In Group A hold relax of Proprioceptive Neuromuscular Facilitation (PNF) was applied to upper trapezius muscle while in group B Muscle Energy Technique (MET) was applied on the same muscle. Comparison is made for examining the effectiveness of both PNF and MET on pain scale and cervical ranges.

Improvements were seen in both groups but results of Hold Relax PNF technique is found to be more effective than MET. Major difference was reported pre and post treatment in the pain magnitude and neck range of motion.

The result of this study supports the application of PNF technique for relieving non-specific neck pain and upper trapezius muscle spasm.

Neck pain is peculiar prevailing reason for musculoskeletal problem. Pain can arise from a number of reasons that may involve any tissue of the neck influencing 60-70% of the overall population at various times in their lives1.Neck pain is very common, however, the uplifting news is that the majority of neck pain is not brought on by serious disease. Neck pain is common among workers, teachers, and students, has a wide range of reasons. While neck pain cannot generally be cured, there is various treatment options available. Neck pain without any underlying disease or abnormal anatomical structure is termed as non- specific neck pain and it can results from postural and mechanical factors such as sprains and strains of the muscles or ligaments in the neck. Symptom of non specific neck pain includes pain develops in the neck and spread from the bottom of skull down to the upper trapezius region and moving the neck becomes painful1. Upper trapezius tightness can also cause neck pain as these muscles are highly susceptible to overuse and by consistently overusing the muscle group can leads to muscle tightness and irritation as recurring motions do not permit the affected tissue to relax between movements2.

Physical therapy management of neck pain and upper trapezius tightness can include wide range of interventions including electrotherapeutic modalities, stretching and strengthening exercises, myofascial release, traction and manual therapy. There are varieties of manual therapy treatment options available that can be used to decrease neck pain and improve neck ranges. These treatments may include trigger point therapy, mobilization and manipulation. Muscle Energy Technique (MET) is one of the techniques that are used to treat musculoskeletal dysfunctions. In muscle Energy Technique the effected person can actively contract the muscles from a controlled position in a specific direction in opposition to the force applied3. MET are widely used to treat muscle hyper tonicity and muscular tightness and it is also effective technique in the management of joint dysfunction and in breaking joint capsule adhesions. MET is found to be effective in lengthening potentially shortened postural muscle, methods through which MET may turned out in improved joint range of motion stay unproven, some authors of MET claim that “MET produce relaxation of the affected muscles due to inhibition of motor activity through the Golgi tendon organs”4.

Proprioceptive Neuromuscular Facilitation (PNF) is another technique situated in the literature as more capable technique to bring muscle relaxation and to enhance range of motion5. PNF stretching comprises of different techniques that all incorporates alternating periods of contraction and relaxation of agonist and antagonist muscle.

Among PNF techniques, the Hold-Relax technique, uses an isometric contraction of muscles and is commonly used in clinics to relax muscle, relieve pain, and to improve the ROM of joints6. PNF employs the proprioceptive system of body to inhibit or promote soft tissue contraction. Dorothy Voss, one of the proponents who practiced PNF, explained it as “A method of promoting or hastening the response of the neuromuscular mechanism through the stimulation of proprioceptors”6.

Neck pain is common problem among people who works for prolong hours and it is strongly recommended to motivate patient to seek conservative treatment such as manual therapy in which there is wide range of techniques that are used to relief pain. In this study, Muscle Energy Technique and Hold-Relax technique of Proprioceptive Neuromuscular Facilitation is used to identify the effectiveness of one technique over another.

Population of study comprises of students, workers and patients who had complain of neck pain without any underlying disease and pathology and having upper trapezius tightness. Sample size of 30 patients was collected. Simple Random Sampling Technique is used in this study. Single blinded randomization was used for the subjects to be allocated into two groups; A and B. In Group A, Hold Relax of Proprioceptive Neuromuscular Facilitation was given to upper trapezius muscle, and on group B Muscle energy technique is applied on the same muscle. A questionnaire was given outlining the eligibility criteria for the study to screen the subjects for any known medical condition of neck for example; history of neck trauma, congenital deformities, chronic conditions like arthritis. Selected participants were evaluated for pain using VAS scale and restricted neck range of motion due to upper trapezius tightness using goniometer. Both Ranges and pain scales were recorded at initial assessment day and re-assessed after four weeks of treatment.

Gender both male and female

The data was evaluated and analysed at Statistical package for social science (SPSS-20). Sample size of 30 participants was included via Simple random technique. In this study we apply the two techniques over upper trapezius muscle (upper trapezius tightness) Study includes 14 males and 16 females ( table1) of age between 19-30 years; all participants were healthy and are not physically or mentally disabled. On the basis of cervical ROM we consider the following movements after application of techniques over cervical spine

Assessment of participants was done on the basis of cervical spine (ROMs) and Pain Management on VAS scale.

After application of both the techniques it was observed that both techniques were effective in order to relieve pain and increase ROM.

Table 2: Statistical comparison of Cervical Range of motion after application of both techniques. 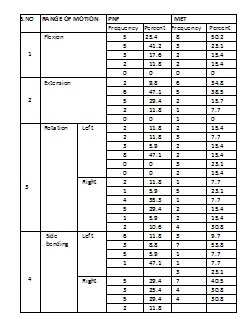 Results of Visual Analog Scale shows that the mean Rank for PNF (Hold relax) in VAS Scale is high therefore PNF is much better in relieving pain than Muscle energy technique (table 3a). 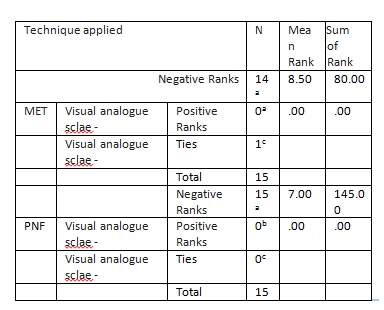 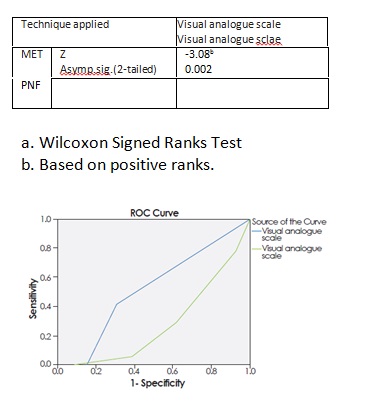 Overall, the results (table 3b)shows that both techniques are effective in reducing pain and increasing cervical range of motion but PNF techniques show more significant results as compared to MET.

Muscles are dispersed throughout the human body and they are the most important energetic tissues that maintain posture and helps in the movements of the musculoskeletal system. Neck pain is one of the most common problems in our society. Upper trapezius is the most probable postural muscle which gets shortened in most of the cases. There are several ways to treat upper trapezius tightness. In this study two techniques Muscle energy Technique (MET) and Hold Relax technique of Proprioceptive Neuromuscular Facilitation (PNF) is compared. There is a lack of evidence about the effectiveness of Muscle Energy Technique (MET) when compared with the stretching technique of Proprioceptive Neuromuscular Facilitation (PNF).

Past researches have typically demonstrated that most frequent treatment technique PNF which is used to treat physical dysfunction resulting from any damage or disease23,24. A study conducted in 2004 showed improvement in hamstring flexibility with the application of PNF technique25. Another study conducted by Gonzakz Rave et al, showedincrease in the ranges of motion of the shoulder and hip joints in 51 patients with the application of Proprioceptive Neuromuscular Facilitation technique. The result of our study indicated that the neck pain decreased and range of motion is increased in group who performed isometric exercises of neck. On the other hand, Muscle Energy Technique (MET) is also effective in decreasing pain and dysfunction. Muscle Energy Technique (MET) is also used to stretch a shortened muscle and strengthen a weakened muscle. There is a lack of evidence to make any absolute result about the efficacy of Muscle Energy Technique (MET) on neck pain and upper trapezius tightness. Overall we found minimal evidence that Muscle Energy Technique (MET) reduce pain on upper trapezius tightness.

There is lack of evidence found on the Muscle Energy Technique in comparison with other manual therapy treatment. In our study it also shows that there is minimal effect of Muscle Energy Technique on neck pain and cervical range of motion. On other hand, our study shows good effect of Proprioceptive Neuromuscular Facilitation in the management of pain in VAS scale and in cervical ranges.

Statistical analysis shows for group A and B, there was mild significant effects after applying PNF Technique than MET.

Hence, PNF (Hold relax technique is much effective than MET in relieving of muscle tightness and management of pain in upper trapezius tightness and pain.

[16] Bindra S. A study on the efficacy of muscle energy technique as compared to conventional therapy on lumbar spine range of motion in chronic low back pain of sacroiliac origin. Hum Bio Rev. 2013;2(4):336-349.

[22 ] Lewit K. Postisometric relaxation in combination with other methods of muscular facilitation and inhibition. Man Med. 1986;2:101-104.