United Nations and the World Health Organization (WHO) focused on diabetes as a major global health concern in view of the enormous worldwide epidemic1,2. The International Diabetes Federation IDF estimates that over 415 million people had diabetes globally in 2015, and that figure is predicted to increase to 640 million by 20403. Despite the fact that more than 12% of global health expenditure was allocated to addressing the condition and its effects in the same year 2015, diabetes was responsible for an estimated 5.0 million deaths3. According to the reports of Centers for Disease Control and Prevention, 8.7% of the US population, or 28.7 million persons of all ages had diabetes4. As of today, there are differences that are maintained among different ethnic groups around the world, it is recorded lower among whites as compared to black or Hispanic groups. According to a report, the indicator of diabetes mellitus disorder has not significantly changed among black groups5.

Earlier 2018, the only prior national diabetes survey in Pakistan from 1999 (published in 2007), using the oral glucose tolerance test, found a prevalence of type 2 diabetes of 11%6. The IDF reported in its Atlas 5th edition regarding the prevalence for Pakistan to be 6.8% in between aged group of 20–79 years, but healthcare professionals with local insight always believed this to be an underestimate. Subsequently, there were conflicting findings with prevalence ranging from7.2% to 19.21% in different regions of the country7,8.

Along with an increase in life expectancy due to tremendous progress in multifactorial cardiovascular risk management and successful revascularization therapy for people with diabetes, the global obesity epidemic has emerged as a critical factor in the rise of diabetes incidence in addition to the general growth and ageing of the world’s population. These developments have also contributed to the expansion of the global diabetes population8,9. A report shows that the current trend of the world population’s BMI is rising from 20.1%, suggesting that diabetes mellitus disease may rise due to an increase in obesity or the fact that 85.1% of the population will suffer from type 2 diabetes malleitus10.

Diabetes mellitus type 2 is increasing in prevalence among people worldwide for a variety of causes, including ongoing imbalances in dietary patterns, food components, and environmental, physiological, behavioral, social, and economic factors13-14. Even though diabetes mellitus and obesity are related, and the world population continues to have a high rate of diabetes, people are

becoming more and more addicted to fast food and other goods that include sugar and other components that contribute to fat15-16. A study conducted in Spain17 to estimate the prevalence of obesity and its association with other health related condition including diabetes and hypertension, they found prevalence of obesity and diabetes to be 18.4% and 7.6% along with significant association, however, odds and relative risk ratio was not calculated. While a study18 contrary to this believes, stating that obesity is not the cause of type 2 Diabetes Mellitus DM, but the resistance developed through T2DM predisposed to diabetes before they become obese. This debate yet not cleared in literature with evidence of odds ratio and relative risk of DM among obese population and no study has been discovered to be conducted in Pakistan that analyses the risk of diabetes, particularly in those who are obese. Therefore, research in Pakistan is needed to identify the population at risk in order to promote awareness of obesity as a risk factor for diabetes, to offer guidance, and prevent future generations.

A case control study was conducted on diabetic and non-diabetic individuals during the period of Nov 2021 to April 2022 in different clinics and hospitals of Karachi, Pakistan. A total of 230 participants were enrolled in the study using non-probability convenience sampling technique. Peak visiting hours of participants was considered to avoid any inconvenience, mismanagement, or inefficiency in the data gathering procedure.

Participants both male and female with age group of 20 to 60 years, who were already diagnosed with type II Diabetes mellitus through their Diabetologists were included in the study as case groups where as for the control group individuals who do not have diabetes mellitus type II were included with same age group. Participants who were pregnant or those who refused to be a part of study were excluded from study.

Following the recruitment of participants, written informed consent was taken with a brief introduction of research study and its advantages and disadvantages. A questionnaire was given to them, comprised of 14 statements related to the symptoms and severity of diabetes they are suffering. Individuals who are unable to read or write, assistance was provided to them by data collector and their preferred answer was marked on the questionnaire. Following the collection of filled questionnaire, participant’s weight and height was measured using stadiometer and their BMI was calculated.

Data was entered on SPSS version 20. Descriptive statistics including mean and standard deviation were used to demonstrate numerical variable and for categorical variable frequency and percentage was calculated. Odds and relative risk ratio were calculated for diabetic individuals with obesity.

The data was kept confidential and the participants were provided with full autonomy to take part in the research. Further, all the causation of harm was avoided to the participant throughout the study. The study was performed with the ethical standard of Helsinki Declaration. 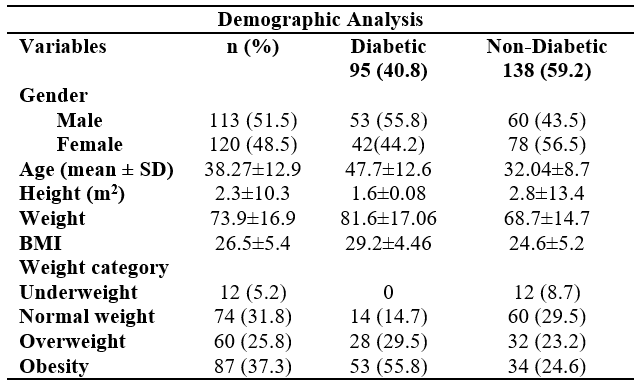 In this research, we discovered that 40.8% of the population had diabetes, with gender-specific prevalence rates for men and females of 55.8% and 44.2%, respectively. Despite the fact that both genders’ lifetime risk of diabetes is closely correlated with BMI, men’s incremental absolute risk increases between overweight and obese persons are greater than those between normal weight and overweight adults. These outcomes are in line with the findings that those with BMIs below 30 kg/m2 clearly have greater mortality risks19,20. Recent studies of national diabetes trends also show that those with a BMI under 30 kg/m2 have experienced the vast bulk of the secular rise in diabetes21. The relative risk in our research was likewise discovered to be 2.17 times significantly greater (p<0.05) than that of the non-obese group, at 95% of confidence interval. Previously a meta-analysis conducted in which 18 of the studies were pooled and according to this, those who are obese have a 7 times greater chance of developing diabetes than people who are of normal weight. Those who were overweight had a 3 times increased chance of developing diabetes than those who were of normal weight. Also the overall relative risk was higher than for obese men22. According to a study23, obesity is more strongly associated with type 2 diabetes than an unhealthy lifestyle, with obese people having a >8-fold increased chance of developing the disease. Another study conducted in India has found that obese persons had a moderately association with type 2 diabetes mellitus and a strongly positive association with hypertension24.

According to a study, people with a BMI over 40 have higher odds of being diagnosed with diabetes (7.37 OR; 95% CI, 6.39–8.5), hypertension (6.39 OR; 95% CI, 5.67–7.16), and hypercholesterolemia (1.88 OR; 1.67–2.13)25. The increased influx of glucose is thought to be responsible for the pathophysiology of obesity. The potential to increase subcutaneous adipose tissue mass, particularly in the gluteal-femoral region, may allow persons who are overweight or obese to be at far lower risk than anticipated when faced with excessive energy intake26.

Individual lifestyle changes should be required to lower the risk of diabetes occurrence in obese people. To combat the obesity epidemics, a variety of strategies have been put forward, often advising a variety of food and/or physical exercise with behavioral support. At least temporarily, there are many methods for stopping the development of pre-diabetes to diabetes in obese people, including dietary and activity changes, pharmacological treatments, and other therapies. At least two meta-analyses have shown that a large weight reduction is the most efficient way to stop the development of pre-diabetes to diabetes during obesity27.

The case control study design was strength of our study that evaluated the difference in healthy individuals and obese population depicting risk in both group of peoples. The limitation of this study is small sample size, could have been done on larger sample size to avoid recall bias in the result. Future studies should find relative risk with respect to each weight category and with incorporation of lifestyle in predicting the odds and relative risk ratio.

The study concluded that the prevalence of obesity is higher in diabetic population as compared to non-diabetic individuals. This increases the chance of developing diabetes as compared to normal weight individuals. The risk of having obesity related complications like diabetes is also increasing which may lead to mortality and morbidity. Thus the risk stratification may help us identified the level of damage that obesity may cause. This will help in preventive care for the population. In order to reduce the risk of obesity and diabetes among the people, individual lifestyle modification should be required immediately that includes changes in diet, sleeping habits, exercises, and other therapies.