Objective: To compare the effects of sciatic nerve gliding and lower extremity stretching on hamstring flexibility among football players.

Methodology: In this randomized clinical trial 20 male athletes were selected which divided in two groups. One group was given sciatic nerve gliding while other lower extremity stretches. Athletes with age of 18-30 years, male foot ballers who regularly exercise 2 to 3 times a week for 30 minutes for 6 weeks were included. Goniometer was used to collect data by performing straight leg raise and Active knee extension test.

Results: The results showed that the mean age and SD was 21.30±1.809. Comparison of treatment within group was checked by Wilcoxon Rank test showed significant results (P was less than 0.05 )and between group comparisons was checked by Mann Whitney test and found sciatic nerve gliding gave more improvement in Athletes performance (  p value was less than 0.05 for straight leg raising and active knee extension test.

The hamstrings fundamentally influence adaptability of the body, and diminished hamstring adaptability brings about diminishes in trunk dependability and money owed to inappropriate change of the gluteus Maximus and stomach muscles1,3.The hamstring muscles is a significant part in the presentation of day by day exercises like Dynamic Stretched development of the storage compartment, strolling, running, and bouncing , and it is a significant muscle associated with keeping up with equilibrium and stance in standing position4,5. Increased hamstring’s flexibility plays a contributing role in enhancing athletic overall performance6. Balanced muscle tissues maintains joint’s range of movement, which improves the encircling muscle groups’ blood supply and contractibility, decreases put on and tear on the articular systems encapsulating the joint, promotes recuperation of confused tissue, and assists in motor-mastering strategies to make sure extra powerful and accurate overall performance techniques7,8. Recently created strategies to build the adaptability of the hamstrings incorporate static extending, contract-loosen up extending, thermo-treatment, rub, and neurodynamics9,10. Neurodynamics is a manual technique for applying power to nerve structures through act and multi-joint development11,13. In light of the rule that the sensory system ought to be likewise extended and contracted appropriately to keep up with ordinary muscle pressure and guarantee scope of movement14,15. Previously, it has arisen as prominent that a pre-body heat-up before active work can without a moment’s delay impact execution11. Generally, a pre-action heat-up has included low profundity cardio practicing and some state of extending, alongside static or dynamic stretching16. Warming up can likewise affect muscle strength and force, athletic execution, joint assortment of development17, muscle adaptability, and possibility of injury12,18. Moreover, the impact of a warm-up on physical issue decrease is uncertain19. In this manner, it’s miles basic to place in power amazing procedures of warming as much as accomplish the most adequate results and to save you mishaps8,20.Dynamic stretching has been defined as a ‘‘managed movement thru the lively range of movement for every joint’’ there may be some proof to suggest that dynamic stretching enhances electricity, agility sprinting overall performance vertical leap height and electromyography pastime measured at some stage in an isometric maximal voluntary contraction19.  Neurodynamic is known to be very effective technique in increasing flexibility of hamstring muscles and is thought to be useful way to reduce neural mechanosensitivity (the specific response to mechanical stimulation)21,22. In Neurodynamic techniques, neural structures slide respectively to the nearby structures. The method to apply force is by postural method and movement of multi joint with the objective to stretch and slide neurodynamic structures9,23. The literature describes four common strategies of assessing hamstring muscle period those consist of the knee extension angle take a look at, the sacral angle take a look at, the straight leg boost check, and the sit-and-reach take a look at.7,16.

Hamstring muscles flexibility is very important among football players. By giving lower extremity stretching’ and sciatic nerve gliding blood supply and contractibility of muscle improved. The rationale of current study is to compare the effects of sciatic nerve gliding and lower extremity stretching’s on hamstring flexibility among football players.

This study was 10 months.

Data was collected from Pakistan Sports Board Coaching Center, Lahore.

was footballers male with 18 to 30 years and having  hamstring tightness of one or both legs, unable to achieve more than 160o  knee extension with hip at 90o flexion and can reach <70o hip flexion in SLR.

Athletes with prior history of injury in lumber area, level of activity low for last three days, any disorder of low back like disc slip or herniation etc. and with the history of lower limb fracture were excluded from study.

After taking consent, participants were randomly selected and assigned in two groups. A 5 minutes warm up and cool down session were given before and after the treatment respectively and it was same for both groups. Before starting the exercise participants was assessed by using goniometer by performing straight leg raise and active knee were performed for both pretreatment and post treatment evaluation. After noticing down the measurements participants were divided in to two group. First group was given Sciatic nerve gliding and its procedure was force was applied at the proximal end and then released distally which is done by applying force on the proximal and repeat the processing in reverse order. This process was applied for thirty seconds and six times on each leg for three minutes (360 seconds). Second group was given lower extremity dynamic stretching. It was applied on the ankle in downward direction by holding for 30 seconds and repeated five times for total three minutes (360 seconds).this was done on both legs .total Treatment was of 3 weeks with 2 sessions per week. 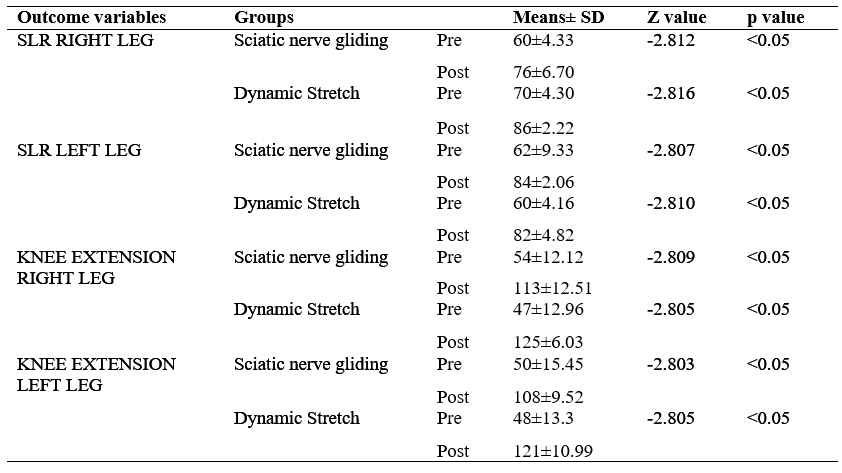 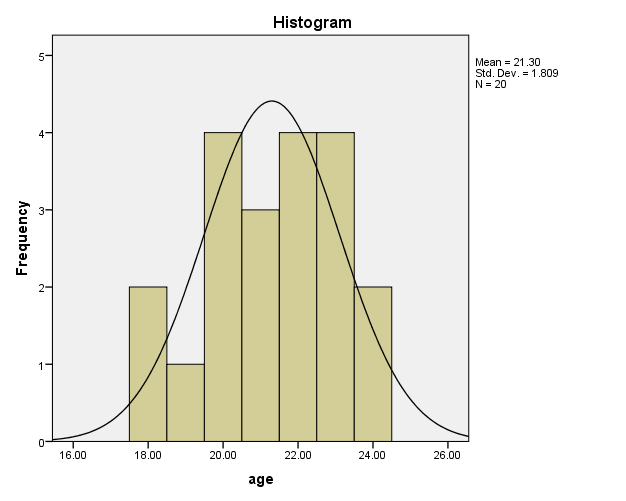 Current Study showed that sciatic nerve gliding was more effective in improving hamstring flexibility. Similar study from previous literature found in 2020 conducted by Danguole Satkunskieneet et al showed that viscoelastic behavior of the sciatic nerve was affected by stretching technique whereas more increase in the extensibility of hamstrings was due to the results of neurodynamic technique as a consequent of increased length of connective tissues and decreased nerve tension. So conclusion was made that neuro dynamic technique gave better results in increasing the extensibility of hamstrings.  Current study’s findings also showed that sciatic nerve stretching is more effective21.

The current study supports the findings of the study conducted by A Balci et al in the year 2020 on wrestlers, revealed that the flexibility of hamstrings is increased by neural sliding and neural stretching exercises of the sciatic nerve24.

On the basis of result, it was concluded that sciatic nerve gliding gave more effective results than lower limb stretching in increasing hamstring flexibility among football players.