Methodology: In this cross- sectional study young players of squash and badminton in the age group of 18-26 years were selected. The participants were recruited by non- probability convenience sampling technique. The strength of major muscle groups of lower limb was measured by a single male tester twice with gap through isometric make test of dynamometer. The intra-class correlation coefficient was then calculated for two readings of each muscle group by using SPSS version 21.

Conclusion: The isometric make test of dynamometer is a reliable tool for the objectification of strength of lower limb in   young players participating in squash and badminton.

Muscle strength plays a pivotal role in the field of rehabilitation sciences and competitive sports to determine the efficiency and performance of an individual. This key factor has been explored by various tools used to measure muscle strength ranging from manual muscle testing and hand- held dynamometer to isokinetic dynamometers1,3. Dynamometry is common technique that is used to measure muscle strength. Isokinetic dynamometer is a gold standard which gives complete force analysis but its availability and cost efficacy has been an issue4. Owing to cost efficacy various muscle groups are explored by hand- held dynamometer and it has been validated as reliable instrument to detect strength differences5. It quantifies muscle strength. The manual muscle testing has been most common tool to measure strength of muscle but the subjective approach of grade 4 and 5 has always been issue. This variation in grade 5 of manual muscle testing can also be quantified through the objective approach of dynamometer6. It is considered sensitive to detect small strength difference, though variation in the characteristics of instruments along with the issue of tester measuring the strength, has its own draw backs7,8. In sports sciences usual practice of strength measurement is affiliated to enhancement of performance and power. Isokinetic dynamometer gives complete force analysis. But due to the expenses and handling issues associated with it, it is not accessible. There is a need to incorporate a handy instrument with objective approach in sports. As an alternate various types of hand-held dynamometers are used to quantify muscle strength. These tools have been explored in various populations taking into account strength assessment of different muscle groups9,11.

Hand- held Dynamometers measure muscle strength by placing it at right angle to the muscle group being evaluated.  The force exerted by the subject is represented in units of weight such as pounds or kilograms. Owing to its objective approach the validity and reliability of dynamometer has always been an area of discussion to establish the extent it can be trusted as an instrument in various practices. Both the techniques of break test and make test has been employed to evaluate strength of different muscle groups in different populations12,14.

Different reliability studies have showed varied results in different populations, ranging from poor to excellent using make and break test. The populations include healthy as well as impaired ones. Regardless the type of test employed (break or make), reliability, that is sustenance towards reproduction of the results has been an issue in various studies. Make test of dynamometer is considered more reliable by some studies as compared to break test to measure muscle strength15,17. In make test the maximal isometric contraction is measured against the force of the examiner, whereas, in break test the resistance is applied by the examiner to overcome the maximum effort of the subject being tested. Both break and make test have been associated with involvement of different mechanisms. The break test is associated more  with eccentric contraction rather than greater recruitment resulting in greater force production18.

as standardized process can also be induced. Further, this will establish the worth of a handier and less expensive instrument in sports to evaluate muscle strength.

This was a cross-sectional study in which thirty-one elite male athletes participated. Athletes were selected from the sports centers of Lahore. The age of the participants was between 18-26 years. The non-probability convenience sampling technique was used to select the participants.

The athletes participating in badminton and squash were selected. Based on it the hand used to hold racket was labelled as dominant extremity. Those healthy young male athletes which used to play squash and badminton, with in age group of18-26 years were included in the study. Those players who were having any associated condition, history of recent injury within last 6 months or were at rest, not participating in regular training program during last six months were excluded. The quantitative data was collected by Hydraulic Hand-Held pull push dynamometer, with the consent of the players. Baseline 250 hydraulic push-pull HHD (Baseline Corporation, Irvington, New York) used in this study for measurement of strength has been used as a valid tool in previous studies19,20. It gives the reading of measured strength in kilograms and pounds.

In this study the intra rater reliability of isometric make test of hand- held dynamometer was measured. For this purpose, the basic procedure of isometric make test was used. Following the respective guidelines for particular muscle group the strength of various muscle groups of lower limb was assessed. In this procedure, as endorsed in earlier studies, the participants were asked to exert maximally, building maximum amount of force within 4-5 seconds according to the action of muscle21. The physical therapist held the dynamometer fixed against the effort of the participant. The same procedure was revised to get second reading. The strength was measured in pounds. The readings were taken by a male therapist. The position of the participants and therapist along with placement of dynamometer for various muscle groups of lower limb are explained in table 1, the positions exhibited were the ones that were reliable according to earlier studies.

Table: 1 Position of therapist, dynamometer and limb of athlete for muscle group tested

SPSS version 21 was used for data analysis to measure reliability of hand- held dynamometer. The descriptive characteristics of the athletes was presented through mean age, weight and BMI.  The intra rater reliability was measured through intra- class correlation coefficient of two readings at 95 % confidence interval. The level of significance used was α=0.05.

The participants were informed about the benefits of study. Complete procedure was explained to them and then data was collected with their consent. All information regarding participant was kept protected under researcher’s supervision. 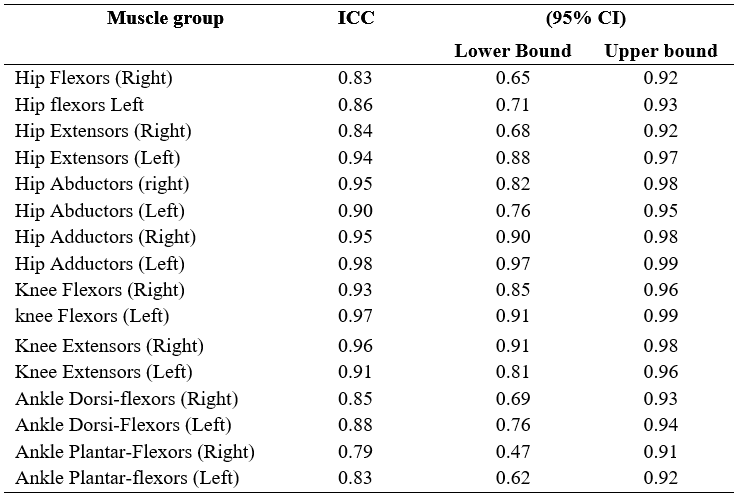 Table 3: The Intra-Rater Reliability of Isometric Make Test in Muscles of Lower Extremity of Young Athletes

The outcome measure of this study was the strength of major muscle groups of lower limb measured by Hand- held dynamometer. Two readings were taken by a single male tester twice with a gap through isometric make test of dynamometer. These readings established the intra rater reliability of hand held dynamometer through intra-class correlation coefficient.

Bohannon, earlier studied the reliability of hand- held dynamometer in different populations23. In one of his study on neurological conditions ANOVA and Pearson correlation was used to establish reliability by the same observer. The Pearson correlation established good to high correlation, however ANOVA calculated showed significant differences for shoulder and hip abduction. In this study evaluating strength by isometric make test the intra rater reliability of hip abductors was excellent in healthy athletes.

The results of this study which was conducted on athletes are quite similar to the study conducted by Arnold et al. on older adults. In his study he analyzed muscle strength of lower extremity in older adults as an indicator to predict fall24. This study revealed the intra-rater reliability for hand held dynamometer to be high with ICC varying between 0.90-0.98. Although older adults have less strength variation as compared to athletes, yet the results of this study are completely in collaboration with the results of our study. This highlights the reliability of dynamometer to measure strength in wide variety of population.

In another study, Pfister et al. evaluated the intra-class correlation coefficient, to measure reliability of hand held dynamometer in patients with myopathies25. He found the reliability of dynamometer to be in the range of 0.75-0.97 for all muscle groups except for knee extension for which it was 0.61. The variation of results in association with our study indicate a substantial reliability in knee extensors.

This discussion emphasizes that hydraulic hand-held dynamometer to be a suitable instrument which can be used to assess muscle strength in young athletes as a prognostic indicator. To measure impairment some studies indicate it to be inadequately substantial regarding different muscle groups like knee extensors and ankle dorsi-flexors as described earlier. However, in normal population other studies have emphasized it to be substantially reliable.

In the field of sports sciences and rehabilitation where sophisticated and expensive instruments are not available, hydraulic dynamometer can be used as substantially reliable tool to measure strength. This can help to standardize the process of sports rehabilitation and training, especially in developing countries where resources are limited.

In future, a study with larger sample size, considering different sports and populations needed to be explored further.

This study conducted on athletes established, isometric make test of hand held dynamometer to be a reliable instrument to measure the muscle strength in young athletes participating in badminton and squash. The reliability varies between good to excellent in various muscle groups of lower extremity. This highlights that hand held dynamometer can be used as a diagnostic and prognostic tool to detect strength differences in young athletes.